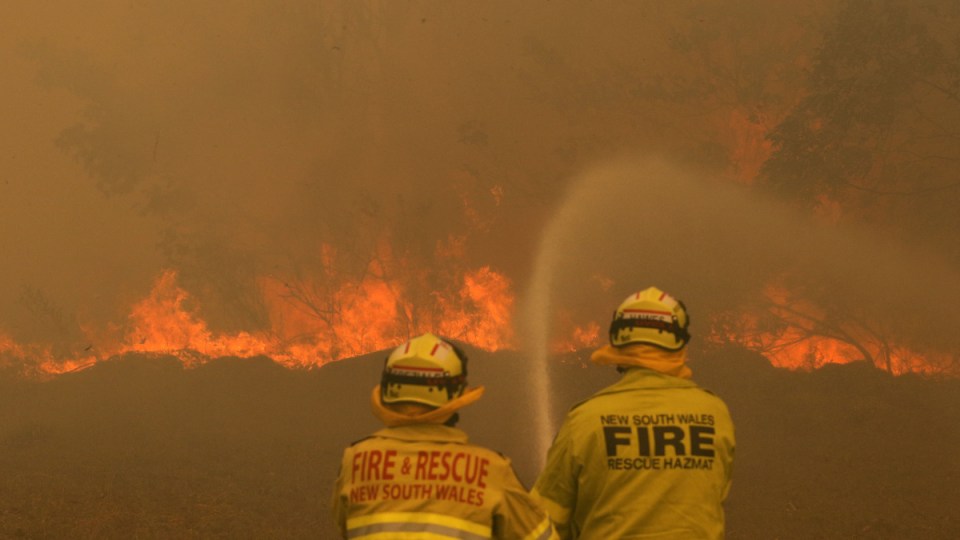 Firefighters work to contain a fire around Old Bar in NSW, where two people died at the weekend. Photo: AAP

Barnaby Joyce has revealed his parents’ property is in the path of the bushfires raging in NSW as he slammed the “misrepresentation” of his remarks that two people who died in the fires most likely voted Greens.

The former deputy prime minister spoke to The New Daily as he was on his way to try to help protect his parents’ property amid a political storm over his comments.

“By the way, I’ve got a fire going to my place, so I am desperate to get there to fight it,” he said.

“I am the next place across. It’s my parents’ place. I am desperately trying, trying to rig up stuff to protect the house.”

Earlier on Tuesday, Mr Joyce told Sky News the local community needed more resources for hazard-reduction burns, saying: “And that’s the crazy thing there, and I acknowledge that the two people who died were most likely people who voted for the Green party, so I am not going to start attacking them. That’s the last thing I want to do.”

But he accused critics of “wantonly misrepresenting” his remarks about two NSW bushfire victims – Vivian Chaplain and George Nole.

Mr Joyce said he was actually trying to urge politicians to be more respectful of the alternative community where the victims lived, where the majority of residents voted for the Greens.

His remarks followed Nationals leader Michael McCormack’s bizarre attack on “inner-city lunatics” who voted for the Greens on Monday.

“My point is I was saying ‘just be careful, you don’t understand’. If you came into my community and talked to them – I am not having a go at the Greens, I think that’s completely wrong,” Mr Joyce told The New Daily.

“The people who live there are in a commune basically. Wytaliba is an alternative community. They don’t vote for me, they vote for Greens, and I’ve got no problem with it. They agree there should have been more burn reduction, fuel reduction.”

Barnaby Joyce defends his criticism of lack of backburning by Green councils with these eyebrow raising comments : "I acknowledge that the two people who died were most likely people who voted for the Green party – I'm not going to start attacking them."

“They themselves are choosing to turn this into a political issue, rather than give a s–t about people who are dealing with it,” he said.

“That’s completely out of order. Absolutely. Because two of them are dead. People have wantonly misunderstood me.”

“How does he know who they voted for and why does it matter? They’re dead; they died in a bushfire,” she said. “Isn’t that enough?”

Asked if it mattered who they voted for, Liberal senator Simon Birmingham replied, “No.”

As the ugly debate intensified, the Greens senator Jordon Steele-John claimed the Liberal Party and its Labor opponents were “no better than a bunch of arsonists, borderline arsonists”.

“There is not a scientist in this country – there is not a qualified individual on the face of the earth – that would say anything other than that there is a direct causal link between the burning of coal and the creation of dangerous climate change,” he said.

“We heard your feeble mutterings in the chamber yesterday about the idea that, at some other point in the future, it might be the appropriate time to raise the issue of climate change.

“In the past, when we as a community have confronted issues of national tragedy and crisis, such as we did after Port Arthur, we have come together as a nation and acted. You are no better than a bunch of arsonists – borderline arsonists – and you should be ashamed.”

‘Admit what the hell is going on’: Biden wants US to face White Supremacy problem
Sydney home sprayed with bullets in gang violence
Device detonated, man arrested in Brisbane sieges
Peace talks between Russia, Ukraine stall
Viagogo loses appeal over $7m penalty
British MP arrested on suspicion of rape
Torrington residents emerged from shed after blaze to find their world changed, but worse may be ahead
Today's Stories