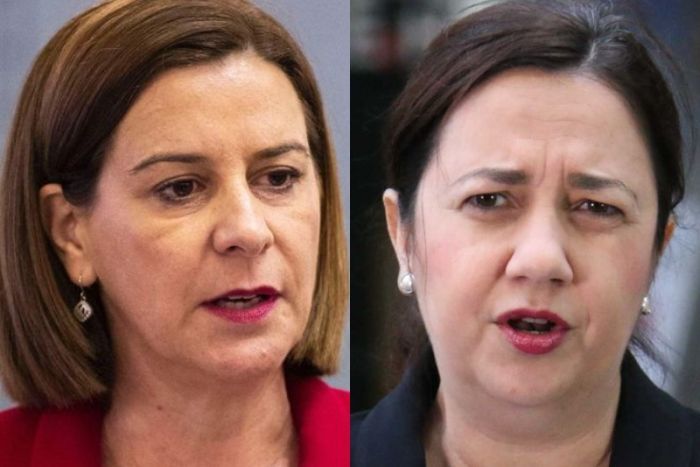 Queensland’s opposition leader has been criticised for suggesting the state’s premier is a “princess” and referring to Annastacia Palaszczuk’s lack of children.

State LNP leader Deb Frecklington has taken aim at Ms Palaszczuk’s image in an interview with The Sunday Mail in the lead-up to next year’s state election.

Ms Frecklington said she had been mistaken for Ms Palaszczuk in public and was at pains to differentiate herself from the premier.

“We are just such different people,” Ms Frecklington told The Sunday Mail.

“She has deliberately changed her image – the whole ‘Princess Palaszczuk’ is pretty obvious – but I haven’t changed mine.”

Ms Frecklington said she was more “grounded” because she had to deal with her children at the end of a tough day while Ms Palaszczuk had undergone a “complete makeover”.

“It’s too much, when there are bigger issues to focus on,” Ms Frecklington said.

Ms Frecklington reflected on her background in regional Queensland, where she said access to healthcare has decreased, especially maternity services.

Labor MPs claim Ms Frecklington “attacked” Ms Palaszczuk for not having children, despite the premier being open about suffering a miscarriage.

The nasty personal attack on my friend @AnnastaciaMP is appalling, pathetic and unbecoming for someone who wants to run the great state of Queensland #LNPfail https://t.co/PgTNlB33q0

“Play the ball, not the woman,” Ms Keneally, a former NSW premier, posted on Twitter.

And it’s well past time to be attacking a female politician for her clothes – yet it still keeps happening. Play the ball, not the woman!!
Even more shameful – in today’s example – is that a woman – @DebFrecklington – is leading the charge. Our own worst enemy, sometimes 🙄

“The last time I saw this level of meanness was actually in the movie Mean Girls,” she said.

Queensland LNP MP Jarrod Bleijie stood by his leader’s comments, claiming Ms Palaszczuk preferred “the glitz, the glamour, the celebrities” and suggesting she was out of touch.

The Premier has spoken openly about a miscarriage, four years of IVF, and her endometriosis.

Attacking her for not being a Mum is a low act & the LNP should know better.

And complaining about her clothes is pathetic & pitiable. https://t.co/4i94o4rzvo

‘Like mean girls’: Qld premier attacked for her clothes and lifestyle