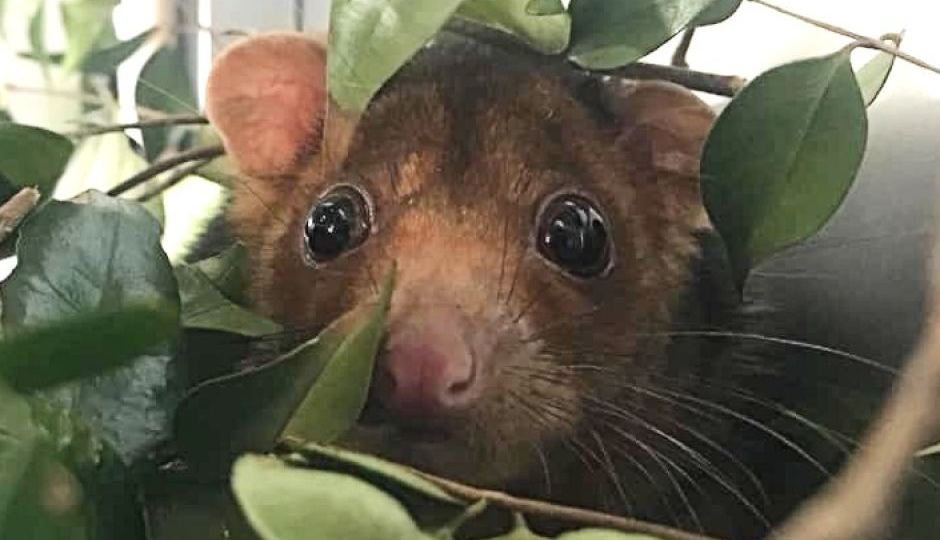 The juvenile ringtail possum made a drey of leaves in a spare tyre of a vehicle. Photo: Facebook

A young ringtail possum made an unplanned tree change after it decided to make a home in the spare tyre of a parked ute in Brisbane’s CBD over the weekend.

The possum constructed its leafy drey, or nest, in the spare tyre of a ute parked at the Royal on the Park Hotel, across the road from the Mt Coot-tha Botanic Gardens.

It then hitched a lift on a 100-kilometre road trip as the driver returned to his home at Witta on the Sunshine Coast hinterland.

The driver — who asked to remain anonymous — said he had been staying at the hotel while attending a work conference, and when he arrived home noticed leaves hanging out the back of the tyre of his vehicle.

“I thought it might have been the result of a storm blowing the leaves into it,” he said.

When he reached in to remove the leaves, he felt something small and furry move.

“[The possum] was only the size of my fist. It was all curled up, not going anywhere,” he said.

The man rang Wildlife Volunteers Association Inc (WILVOS) and was told to cover the tyre with a blanket or doona so a volunteer rescuer could trap and transport the possum back to Brisbane.

However, the possum had other ideas and escaped into the green surrounds of the man’s backyard which was “much better than a carpark in Brisbane,” the driver said.

“I think being young he’ll be okay. It’s more of a problem when animals are released as adults because then it’s seen as more of a threat, whereas [other possums] will be more tolerant of a juvenile,” she said.

The possum is estimated to be around eight months old, old enough to make a life away from its parents, she said.

“It’s an age where they going out and they’re making their own drey, which is just like a big cylindrical bird’s nest made of leaves and really beautifully woven, quite strong,” Ms Brennan said.

“They actually just go and pick up the foliage in their tail, carry it in the tail, and then just put it together.”

The possum’s escapade, while humorous, also highlights the growing pressure wildlife are under as habitat is lost to human development, Ms Brennan said.

“In urban and town areas it’s hard for them, housing and food-wise, and that’s why every tree is important,” she said.