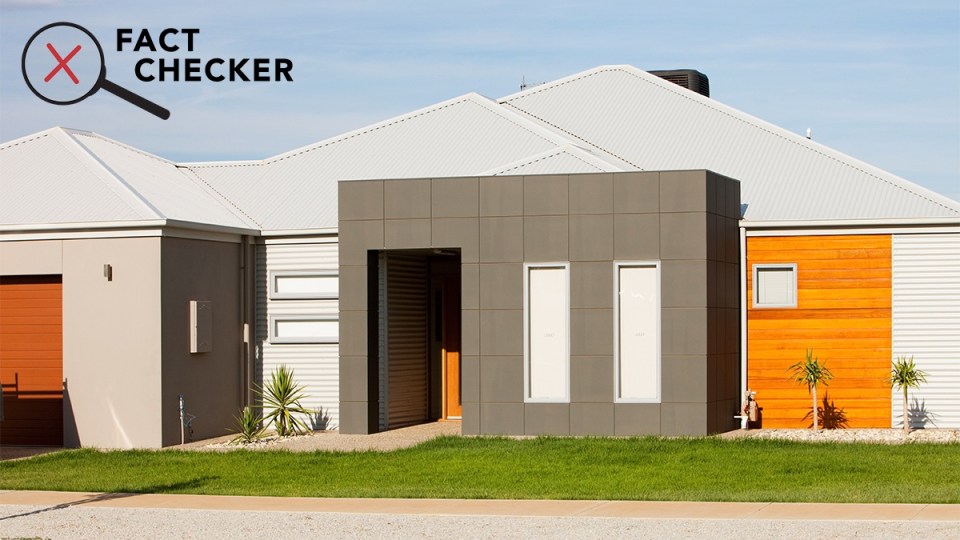 Labor’s proposed Help to Buy scheme aims to help 10,000 Australians into their own homes each year.

It would see a Labor government buy up to 40 per cent equity in people’s homes so they could put down a smaller deposit and take out a smaller mortgage.

It’s the type of scheme Scott Morrison advocated for in 2008.

“If your household income goes above $120,000 a year, Anthony Albanese will put a for-sale sign on your lawn,” Mr Morrison claimed.

“You actually have to dispose of the asset and pay back the government. I mean, this is insane.”

TND fact-checked Mr Morrison’s claim and found it to be misleading.

Labor’s proposal, which you can learn more about here, states that if a home owner exceeds the $90,000 single income cap ($120,000 for couples) for two consecutive years, they will have to buy out the government’s share in the property.

But this would be negotiated in accordance with their personal circumstances – and Labor expects most people in this situation will simply refinance and add the government’s share to their mortgage.

Nowhere in Labor’s policy proposal does it mention the government will force people to sell their homes.

Even as far as hypotheticals go, Mr Morrison’s claim appears to be bunk.

Labor’s policy is similar to a proposal unveiled by the Grattan Institute’s economic policy program director Brendan Coates in February.

Mr Coates said the whole point of national equity schemes is that people who earn more than the income cap will be able to afford their home anyway.

“As you no longer need the scheme, the government withdraws its funds, its equity, because the person is in a position where they’ve got greater borrowing capacity,” he told The New Daily.

As an example, Mr Coates pointed to a similar equity scheme run by the Victorian government: The Victorian Homebuyer Fund.

Like federal Labor’s proposal, people who exceed the income cap of the Homebuyer Fund for two consecutive years must take ownership of the state government’s share in the property.

“That can happen in a couple of ways,” Mr Coates said.

“It can happen via the person paying back the money over time, but it can also happen by refinancing the loan.

“So at that point, you take on the whole loan, because you’ve also got a higher income, so you can service the loan.”

The Shared Home Ownership scheme in Western Australia operates in a similar way.

Labor says home buyers would be able to repay the government’s financial contribution “in part or whole as their circumstances permit”.

It’s up to the home buyer to negotiate refinancing with their lender.

Going back to the source

A spokesperson for the Prime Minister’s Office pointed to a Sky News interview with deputy Labor leader Richard Marles as the basis for Mr Morrison’s claims.

“The PM’s point is what if they cannot afford to buy out the government? Then Labor would force the house to sell,” the spokesperson told TND.

However, at no point in the interview did Mr Marles explicitly say the government would force people to sell their homes if they earned too much.

Instead, host Peter Stefanovic repeatedly asked what would happen if a scheme participant died and their children were left to inherit the home.

Stefanovic also tried to assert that the Help to Buy scheme constituted a “death tax” – a claim the deputy Labor leader repeatedly shut down.

The Prime Minister’s Office specifically singled out one comment as the basis for Mr Morrison’s claim on Tuesday morning.

Mr Marles: “Now, if during the course of their life, [the children] acquire wealth, which means they themselves no longer qualify for the scheme, well, then in that circumstance, they would need to be buying out the government.”

But Mr Morrison’s comment explicitly referred to the scheme participants earning more than the income cap – not their children.

“It works in a sensible, practical way,” he told reporters in Gosford.

“When you pass it on to your kids, if they qualify under the eligibility rules, everything’s sweet, nothing changes.

“If they earn more than [the income cap], then they start to pay back the government’s equity.

“That’s the way it works in the Victorian model. If you go from earning 90 grand to 100 grand or 150 grand, there’s a two-year grace period, then you start to pay it back.

“You know this is … sensible. This is about helping Australians who need a little bit of help.”

A spokesperson for Mr Clare later accused the Prime Minister of “talking nonsense”.

Although it is possible that high-income children might inherit their parents’ home and become liable to buy out the government’s share, there is no evidence to suggest the Commonwealth would forcefully sell their homes.

In the case of individuals or couples who suddenly find themselves earning above the threshold, experts believe they’ll be able to refinance the home and take on the government’s share of the equity.

Because of this, Mr Morrison’s claim that “Anthony Albanese will put a for sale sign on your lawn” if your household income rises above $120,000 is misleading at best.