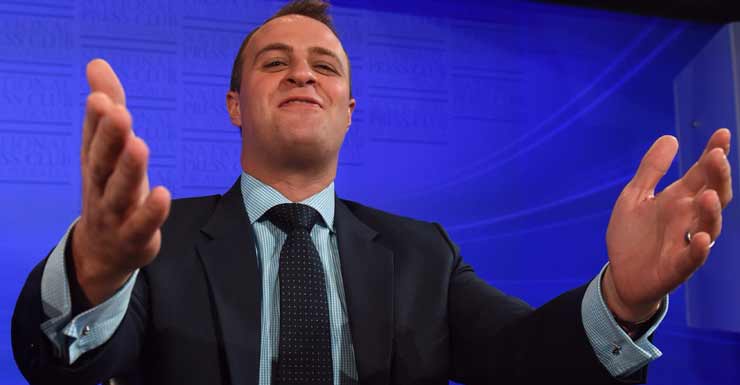 Tim Wilson denies he is under threat in the south-east Melbourne seat of Goldstein.

Liberal MP Tim Wilson made his political bones on defending two ideas: The freedom to choose and the right to private property.

Both ideas are the foundations of an uncomplicated libertarian, or classical liberal, philosophy that Mr Wilson has ridden through his career – first at the right-wing Institute of Public Affairs think tank; a high-paid government sinecure as the nation’s Human Rights Commissioner, and latterly, Liberal Party preselection for the south-east Melbourne seat of Goldstein.

But this week he apparently torched his claim to both values, with an email to constituents in support of local residents spying on each other at a potentially eye-watering cost.

“You will now be seeing visible signs through the letterbox,” he wrote to Goldstein residents about supporters of the prominent former ABC reporter and The New Daily columnist Zoe Daniel, an independent candidate who is challenging Mr Wilson in Goldstein at the upcoming election.

“It is unlawful to erect signs until after the election has been called.

“They are ignoring Council. They don’t care if they break the law.”

Mr Wilson ended his letter by inviting Goldstein residents to report those exercising their rights to freedom of political communication – in, he said, contravention to local by-laws – directly to him on a Parliament-provided email address.

That is despite the fact that not far from Mr Wilson’s electorate, paid billboards featuring Treasurer Josh Frydenberg and announcing he is “delivering for Kooyong” are difficult to miss.

Contacted for comment, Mr Wilson denied he was betraying the laissez faire philosophy he has advocated so sincerely, but admitted to working with local government authorities to enforce regulations on signage.

“Council has advised candidates that planning law does not permit election signage on people’s homes outside the formal campaign period,” he told The New Daily.

“We are complying with the law.

“I feel sorry for those households about to be fined nearly $1000 each in involuntary campaign expenses because their candidate is knowingly encouraging them to break the law, but after Zali Steggall deliberately split donations to subvert electoral law no one should be surprised.”

Mr Wilson’s statement seems to identify what could be another motivation for his recent scrupulousness about local planning by-laws.

He identified the Sydney MP who claimed the formerly safe Liberal seat from former Prime Minister Tony Abbott, in a campaign that focused, as Ms Daniel’s does, on clean energy and clean government.

Ms Steggall and Ms Daniel are commonly referred to as “teal” independents for the way in which their platforms marry classically inner-city ‘blue’ Liberal values with concern for climate change.

Others from the same mould include Sydney inner-city challengers Allegra Spender in Wentworth and Kylea Tink in North Sydney.

The candidates have the backing of the activist-investor Simon Holmes à Court, who heads the Climate 200 group that will direct thousands of donations to MPs taking on Liberal candidates in the above seats as well as Mackellar in Sydney and Mr Frydenberg’s seat of Kooyong.

A recent near-miss after an independent challenged the Liberals in a by-election for former NSW premier Gladys Berejiklian’s seat of Willoughby made it clear a change in the electorate’s mood is real.

It has the Liberal Party directing resources and energy to what were previously considered blue-ribbon seats.

Former diplomat Dave Sharma is locked in a dogfight to beat Ms Spender in Wentworth, a seat that was previously held by another independent, former Australian Medical Association president Kerryn Phelps.

Goldstein, too, could come down to letterbox signage.

But Mr Wilson denies that his call to curtain twitching betrays any sense of worry on his part.

“The feedback we are getting makes me confident that I will continue to have the privilege to represent Goldstein for many years to come,” he said.

“Residents are pushing back against their community’s representation being bought by Simon Holmes a Court”.