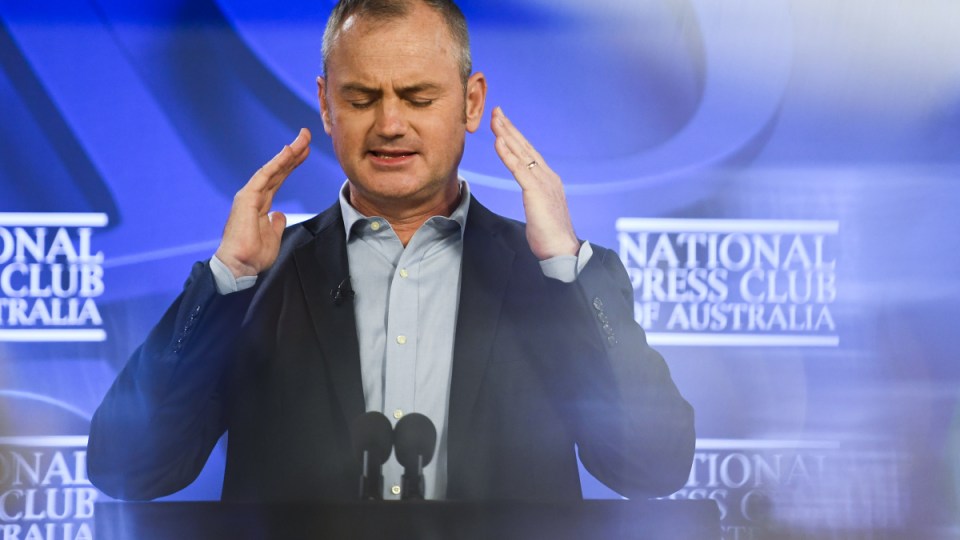 Simon Holmes a Court at the National Press Club in Canberra on Wednesday. Photo: AAP

Climate 200 founder Simon Holmes a Court has challenged the major parties to come clean on campaign funding, as a row over political donations widens.

Mr Holmes a Court told the National Press Club in Canberra on Wednesday that his organisation had received more than 10,000 donations to back climate-conscious independent candidates ahead of the imminent federal election.

He used his speech to attack the Coalition on its climate change credentials and integrity, saying independents – who are expected to hold considerable sway in some seats – had gathered a $7 million war chest to fix Australia’s “broken” political system.

Mr Holmes a Court said many Australians had had a “gutful” of politics.

“As we approach this upcoming election, Australian politics is broken. That’s the problem. That’s why we are here today,” he said.

“Engaged Australians are deeply frustrated that we are not making progress on the issues that matter … We are frustrated that so often our government is found to be either lying or incompetent, sometimes both. We have a government more interested in winning elections than improving our great nation. A government that seeks power, without purpose.

Mr Holmes a Court also rejected claims that Climate 200 had failed to uphold the kind of standards it is advocating for, amid a donations scandal involving independent MP Zali Steggall.

Ms Steggal, the member for Warringah, has admitted a “rookie error” in failing to properly disclose a $100,000 donation.

An Australian Electoral Commission review found she had received the money in a single cheque, but eight declared donations, from the family trust of former coal company director John Kinghorn. The incident has sparked accusations of “hypocrisy” from several Liberal MPs.

Ms Steggall has blamed Damien Hodgkinson, who was her financial controller and is now director of Climate 200, for the error.

On Wednesday, Mr Holmes a Court backed Mr Hodgkinson and said Climate 200 was “scrupulous in our compliance with all of the regulations, we go above and beyond”.

He also challenged the major parties to lower the donation disclosure threshold to $1000 and require real-time disclosure.

“The political parties are Goliaths and they have rigged the game,” he said.

“Hacking at the branches hasn’t been working, we have to strike at the root … [that] means getting people into parliament who are strong, independent, and ready to hold government accountable.”

Victorian independent Helen Haines has also challenged the Coalition and Labor to improve donation disclosure by revealing every donation of more than $1000 to campaigns.

“If the major parties agreed to reduce the disclosure limit to $1000 and require real-time disclosure, we will rapidly congratulate them and immediately follow suit for all donations received from that point onwards,” Mr Holmes a Court said.

Quizzed if his organisation was any different to a political party, he said he had no sway on candidates’ policy positions.

“Multiple independents came to us and said even one string is too many, it must be no strings attached,” he said.

“Our relationship with the candidates – we make a donation, if they ask us, if they are looking for advice on who they can talk to, we will pass that on. But we don’t have any agreement at all with the candidates, they are strictly independent and that is of critical importance to them … because otherwise it wouldn’t be independence.”

He also lashed the Morrison government’s climate policies as an “embarrassment” and “a joke nobody finds funny”, and suggested it was spending millions of dollars a month on a “positive energy greenwashing campaign”.

“Telling us that Australia is doing great on emissions reduction [is] a bald-faced lie,” he said.

“This is taxpayer-funded election advertising, disguised as information. The truth … real emissions have fallen by less than 1 per cent between 2013 and 2020.”

He said internal polling had many of the independents in “very competitive positions”.

“These candidates don’t need to go into politics to be successful because they are already successful,” he said.

“They are business owners, doctors, lawyers, journalists and athletes. They are in it for the right reasons.”

Signalling the candidates would prioritise action regarding climate change, an integrity commission and treatment of women, Mr Holmes a Court said independents tackled legislation that major parties found “too hot to handle”.

Dave Sharma, one of the Liberal MPs being challenged, told Sky the candidates had all the hallmarks of a political party because they wore the same colours, stood on the same platform and had a spokesman in Mr Holmes a Court.

‘Had a gutful’: Holmes a Court challenges major parties on funding