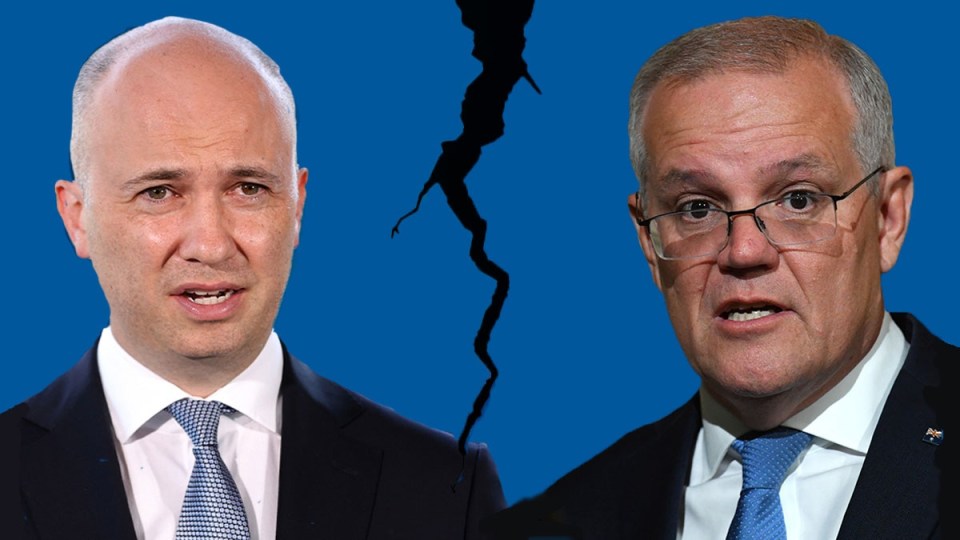 Scott Morrison’s defeat left the parliamentary Liberal Party at a historic low – and now it seems he’s doing more damage on the bounce.

Last month’s federal election result is presenting as the fault line in a divide that could well sink the NSW party’s prospects of being re-elected next March amid a bitter row as another Morrison ally, this one a top state Minister, faces the sack.

Now three weeks after the federal election loss, a weekend report said NSW Treasurer Matt Kean had suggested a journalist on the campaign trail ask Mr Morrison about his choice of the Liberals’ controversial and eventually unsuccessful anti-trans candidate for Warringah, Katherine Deves.

“Matt Kean’s behaviour is nothing short of treachery and will be repaid in kind,” Mr Elliott said on Monday.

The words represent a bitter split driven by Mr Morrison across the NSW Liberals that now divides the cabinet of its most successful government, ten years in power and which could win another term.

Sources told The New Daily that Mr Elliott was expected to receive a demotion from the ministerial bench. Mr Elliott is the NSW boss of the centre-right faction that last parliament opened doors to the Prime Minister’s Office and until recently was key to power in Australia’s biggest state.

A demotion for the Transport Minister would be interpreted alongside the recent sacking of former Immigration Minister and ex-PM’s numbers man Alex Hawke – the progressive cleanout of Mr Morrison and his factional loyalists from divided state and federal parliamentary party rooms.

“Great thing to say one week out from the budget – exactly what we need to be talking about,” one MP said.

Mr Elliott did not return calls or a text message asking if worries about his own political future drove him to give Mr Kean a kicking.

Mr Kean told reporters that he had not encouraged the journalist, the Ten Network’s Stela Todorovic, to press Mr Morrison. Todorovic did not respond to a request for comment from The New Daily.

Ironically the harshest criticism of Mr Kean from federal Liberals is that he goes off message – as Mr Elliott did on Monday at a particularly unfortunate time just before the state budget.

In one of many attacks on Mr Kean, Mr Morrison once said that the NSW Minister would not be recognised if he turned up at parliament house in Canberra.

But seemingly uncontroversial comments about the effect of climate change on disasters drew criticism from News Corp and Mr Morrison, and propelled Mr Kean into national debate.

“No one has done more [for Matt Kean],” one MP said, criticising Mr Morrison for giving the NSW Treasurer a platform that would later be described as a distraction.

Mr Kean has perhaps ridden his role as the object of Mr Morrison’s criticism and the pantomime villain in many Sky News late-night bulletins to national name recognition that has him up front in a lightly contested field of alternative opposition leaders.

One observer said that the two men came from different sides of the issue of free thought and speech, with Mr Kean representing a progressive sensibility that debate must be fed with new perspectives.

“That marked him out as a constant problem [for Mr Morrison],” they said.

The NSW moderate faction, which has backed every Liberal prime minister to serve, loathed Mr Morrison and his governing style.

The party hierarchy was also disgusted by reports that Mr Morrison’s office briefed journalists that the state government was slow to accept federal help on bushfires.

That reportedly sent former party moderate premier Gladys Berejiklian into a rage before she later reportedly called the PM a  “psycho”.

All of which was the backdrop to a change in politics that explained Monday’s deep dispute.

For decades the power struggle among NSW Liberals was between conservatives and moderates.

But a breakaway faction, the centre-right, described by many as more tactical but less philosophical than the rest, has become a more recent powerbroker. Alex Hawke established it and Mr Morrison was one of its earliest adopters, which helped no end during a rocky political start to his parliamentary career.

By 2017, the old moderate and right foes had learned compromise and struck a bargain on the preselection for Bronwyn Bishop’s former seat that paved the way for a grand coalition that didn’t need Mr Morrison, Mr Hawke, or Mr Elliott.

Increasingly, the small centre-right faction was viewed as overexerting its view on policies. It got away with that a little longer still because Mr Morrison used his authority as party leader and prime minister.

“It was not a cabinet table but a prayer room discussing policy options at the heart of that government,” one MP said in a pointed reference to the Pentecostal faith that Mr Morrison and his backer, Mr Hawke, share.

“Some were asking, we f—ed over Julie Bishop [in a leadership spill] all for this?”

When a preselection deal cooked up and enforced by Mr Hawke and Mr Morrison left the Liberals without candidates in a dozen key NSW seats for more than a year – as the federal election loomed – that anger spilled over; critics say the delays were to allow factional allies of Mr Morrison to be installed.

One MP summed up the mood: “That is not how a government thinks, they never learned that. It was always: We’ll wreck the china [hutch] if we have to.”

The popular view that such a philosophy is common to members of his faction did not help Mr Elliott’s political fortunes, some of his colleagues observed on Monday. That’s not unlike Mr Hawke, who is no longer on the frontbench after the federal election loss.

Mr Elliott has already been stripped of his beloved police portfolio and suffered a drubbing from the media, public and colleagues for being asleep when a crucial phone call came in advising of March’s NSW train dispute (later wrongly described as an industrial attack).

On Monday, one MP said they believed Mr Elliott was lashing out because he too would soon face the axe under a pre-election reshuffle and wanted to change the outcome.

“The thinking is he is very much on the nose,” one top source said of Mr Elliott’s problems in the NSW government.

“Every minister imagines that phone call they’re going to stay up all night for – if it’s not a f—king train strike when you’re in the transport portfolio, then what will it be?”

Another senior MP suggested Mr Elliott’s position was much stronger than his critics suggested: “If he’s on the nose, why did the Premier and prime minister back him as a preselection candidate for Parramatta?”

But discussions on Macquarie Street have so far been about Mr Elliot being stood down as part of a chance to finalise the front bench team Premier Dominic Perrottet takes to next March’s election.

Attempts were made to contact Mr Kean and Mr Elliott on the public holiday.

Scott Morrison divides even after fall as Minister faces axe