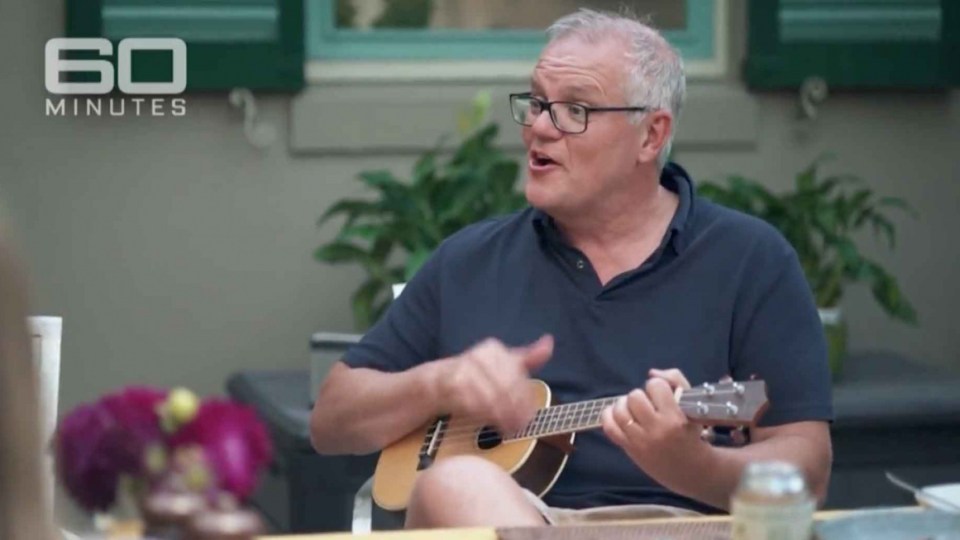 Scott Morrison has been mocked on morning television and social media over footage of him playing the ukulele in a promotion ahead of Sunday’s 60 Minutes profile of the Prime Minister.

While the PM was playing Dragon’s classic April Sun in Cuba, it was the ukulele’s association with Hawaii that had viewers scratching their heads.

Mr Morrison famously took his family on a holiday to Hawaii in 2019 as much of Australia was experiencing a summer of deadly bushfires.

“I think he learnt that in Hawaii, didn’t he?” Today host Ally Langdon said as she introduced the clip on Friday morning.

A small type of guitar, the ukulele is most associated with Hawaii, where is was introduced and widely adopted in the 19th century.

The Hawaii connection was quickly picked up on social media after Today posted the clip, which shows Mr Morrison plucking away at the instrument as wife Jenny Morrison and daughters Lily and Abbey sing along.

Today presenter and 60 Minutes reporter Karl Stefanovic is also present at the dinner table, laughing at the performance before declaring “bravo Prime Minister!”.

“Such low-hanging fruit to remind everyone that he went on holiday when the country was burning and lied about it,” one Twitter user commented.

“Scott Morrison is LITERALLY reminding everyone about that infamous Hawaii trip during the bushfires. All he’s missing is a Hawaiian shirt etc,” another wrote.

ACTU secretary Sally McManus warned of more performances to come, posting: “We need to brace ourselves for how far he will go the more desperate they get.”

And the comments went on along the same theme, including “Scott Morrison probably picked up the ukulele while on holiday in Hawaii … while Australia burned. #scottythefailure.”

The news that Mr Morrison was in Hawaii during a national bushfire crisis was first revealed by The New Daily in 2019.

The scandal was resurrected in November last year, when Mr Morrison falsely claimed he had texted Opposition Leader Anthony Albanese to inform him of the trip.

Mr Albanese refuted the claims and cited messages that showed the Prime Minister had disclosed he was taking a holiday with his family, but did not say he was travelling overseas.