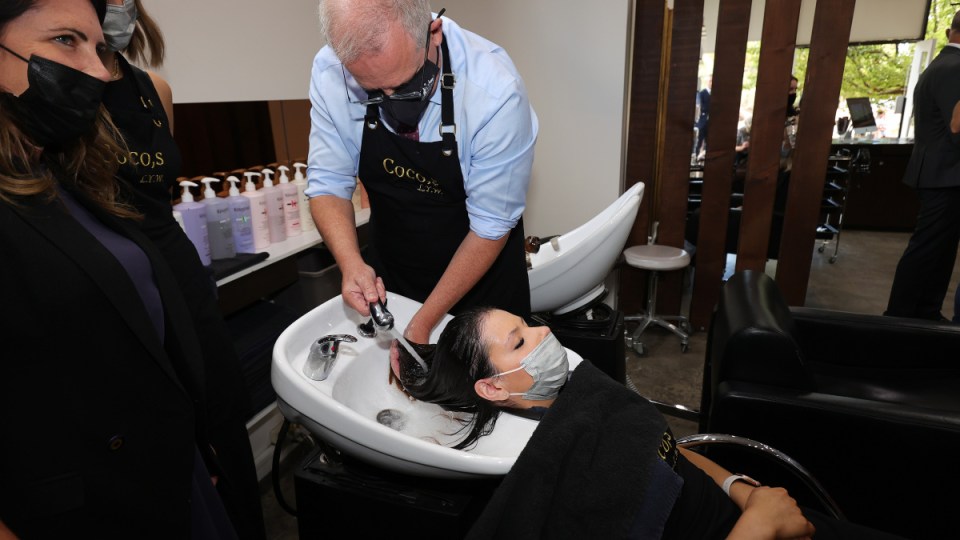 Scott Morrison gets busy with a hose and some shampoo at Cocos Salon on Friday. Photo: AAP

Mr Morrison took his road tour of Australia to the marginal Victorian electorate of Dunkley, held by Labor’s Peta Murphy, on Friday.

In Mount Eliza, in Melbourne’s outer south-east, he visited a hairdressing salon, swooping in to wash the hair of one bemused client.

Mr Morrison’s visit seemed to go well with Cocos Salon’s staff and clients. But it was speedily mocked online.

“He does hold a hose,” comedian and podcaster Dan Ilic tweeted within minutes of the footage emerging.

It was a reference to Mr Morrison’s infamous radio interview on his return from Hawaii during the summer bushfires crisis two years ago – and one that was repeated widely on Friday.

It came after at the end of a torrid week for the Prime Minister, which started with a Newspoll showing the Coalition in its worst position with voters in more than three years.

There has also been the escalating COVID crisis in Australia’s aged-care sector. It emerged on Thursday that 20,000 of the country’s estimated 190,000 aged-care residents were yet to have even a single coronavirus vaccine, and 35,000 were still awaiting booster shots.

On Thursday, the federal government announced a taskforce would look into aged care deaths from the Omicron wave – with more than 560 reported since mid-December. They make up almost 85 per cent of all virus-related fatalities since the variant arrived in Australia.

Defence Minister Peter Dutton confirmed on Friday that the military could be brought in to help fill gaps in the workforce. The industry says more than a quarter of shifts have been unfilled in recent weeks, with scores of workers forced to isolate because of the virus’ spread.

In mid-January, Mr Morrison knocked back a plea from former NSW premier Mike Baird for ADF support in the beleaguered sector.

The Prime Minister has also been forced to defend Aged Care Services Minister Richard Colbeck, who has repeatedly denied his portfolio is in crisis and came under fire for skipping a Senate hearing into the pandemic to watch the Ashes in Hobart.

This week also brought revelations of explosive text messages between another former NSW premier, Gladys Berejiklian, and an unidentified federal cabinet minister. They reportedly lashed Mr Morrison as a “horrible, horrible person” and a “complete psycho”.

Mr Morrison has said he is confident the messages did not come from one of his current cabinet. But Network 10, which reported the texts, maintains they did.

On the ABC’s 7.30 on Thursday, Mr Morrison’s predecessor as PM, Malcolm Turnbull said he wasn’t surprised by the content of the messages, only that they had become public. He said the Morrison government was in “plenty of trouble”, given its polling position just months from a federal election.

“Most Australians see they’ve got a prime minister who is human like the rest of us, doesn’t get everything right, but dedicates himself each day to get us through the realities of COVID,” he said.

Elsewhere, Mr Morrison was also stumped this week by a “gotcha” question about the price of bread, petrol and rapid antigen tests, sprung on him after Tuesday’s National Press Club address.

“I’m not going to pretend to you that I go out each day and I buy a loaf of bread and I buy a litre of milk. I’ll leave those sort of things to you, mate,” he said.

Georgie Dent, executive director of lobby group The Parenthood, referenced that on Friday.

“In the same week that the Prime Minister asked us to accept he is not in the business of knowing things like the price of milk, petrol & RATs, can he please not pretend that washing a woman’s hair is remotely within his repertoire?” she tweeted.

Mr Morrison also used his visit to Melbourne to spruik his government’s record in jobs and training. He must call a federal election by May.

‘Can hold a hose’: Morrison mocked for salon stunt