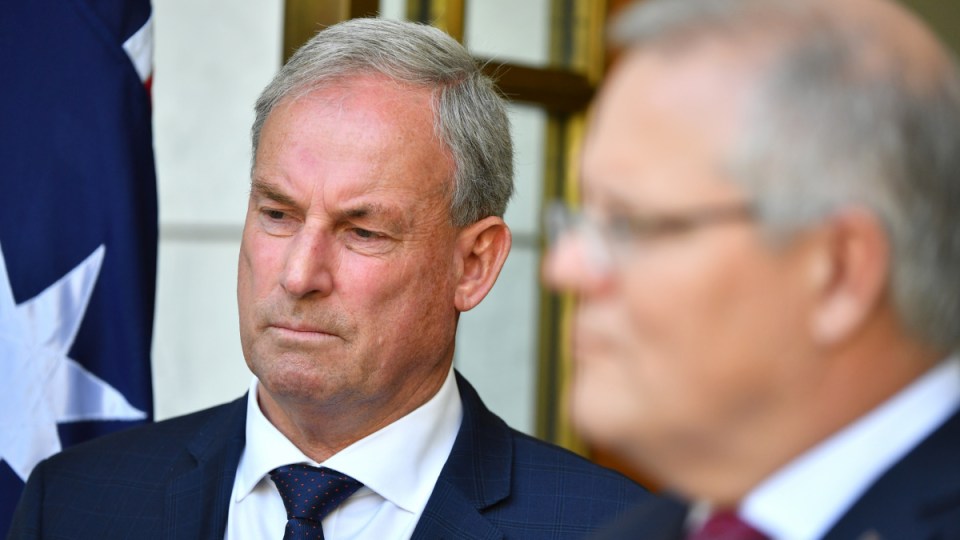 Richard Colbeck is under fire over the more than 500 deaths in aged care since the Omicron wave began. Photo: AAP

Labor leader Anthony Albanese has demanded the Aged Care Services Minister resign or be sacked as a government plan to establish a taskforce to investigate hundreds of COVID-related deaths in care homes draws condemnation.

Mr Albanese said Richard Colbeck should resign over the 566 aged-care deaths since the start of Australia’s Omicron wave, accusing the Minister of showing contempt for the elderly.

“This is just an extraordinary response. Is it the suggestion the department was not looking at those issues that they had to set up a taskforce?” the Opposition Leader said on Thursday.

“If Richard Colbeck does not resign today, the Prime Minister should sack him.

“He is simply incapable of fulfilling the task of looking after the interests of old, vulnerable Australians.”

The government says the task force will seek data from the states on mortality among elderly residents.

Mr Albanese’s push came after Commonwealth chief medical officer Paul Kelly said the federal Department of Health would convene a taskforce into the rate of COVID-related deaths among the country’s elderly.

Close to 85 per cent of pandemic deaths between mid-December – when Omicron took off in Australia – and the end of January were people aged over 70, Professor Kelly said.

He said the COVID death rate averaged across the country’s whole population was about 0.1 per cent.

“We are looking to try to get more details about those [elderly] deaths,” he said.

“We will be setting up a specific task force in the department to look at that and do everything we can to get more detail about the issues.”

Senator Colbeck denied the sector was in crisis and defended its performance when he appeared before a Senate select committee on Wednesday, saying it had performed well in difficult circumstances.

He also defended going to watch an Ashes Test match last month, instead of appearing before the upper house inquiry into the pandemic, saying he continued to monitor the COVID situation closely.

Meanwhile, a leading expert has accused Health Minister Greg Hunt of “victim-blaming” for suggesting that tens of thousands of aged-care residents are refusing COVID vaccinations.

Mr Hunt said some 35,000 aged-care residents elected not to receive booster shots – while another 20,000 were yet to have either their first or second of two immunisations against the virus.

With an estimated 190,000 people in the aged-care sector, Mr Hunt’s figures represent a significantly higher rate of vaccine refusal among the elderly than the wider community.

“We’ll continue to encourage either the residents or their families to take this opportunity,” Mr Hunt said.

Professor Joseph Ibrahim, who heads Monash University’s Ageing Research Unit and who has led inquiries into deaths in aged care, said there was no evidence to support the claim vaccines were being turned down.

“[Minister Hunt is] victim blaming by saying that they’ve chosen not to,” Professor Ibrahim told The New Daily.

“I don’t believe that there’s evidence to demonstrate that they have.

“If anything this points to a failure in communication, education and training, and a failure to engage both the staff and families and the doctors involved […] it’s not a failure of the resident.

“Did they provide sufficient resourcing and sufficient time to achieve the goal?

“Most older people that I’ve met and talked to and most families welcome the booster because it provides peace of mind and increases the opportunity for social engagement.”

Professor Ibrahim further questioned the value of the proposed taskforce, which he said would allow the Health Department to investigate its own actions.

He said there had already been multiple inquiries into failings in aged care that did not appear to have been acted on.

“Are they going to finally look into all of the deaths that occurred in Victoria, which they said that they’d already reviewed with independence?” he said.

“Remember, they had multiple independent inquiries with people that they’d already chosen to do that. So are they no good any more?”

Scott Morrison’s first-home buyers scheme will jack up prices, not build homes
View from The Hill: Morrison a ‘psycho’ – now who would have said that?
Today's Stories