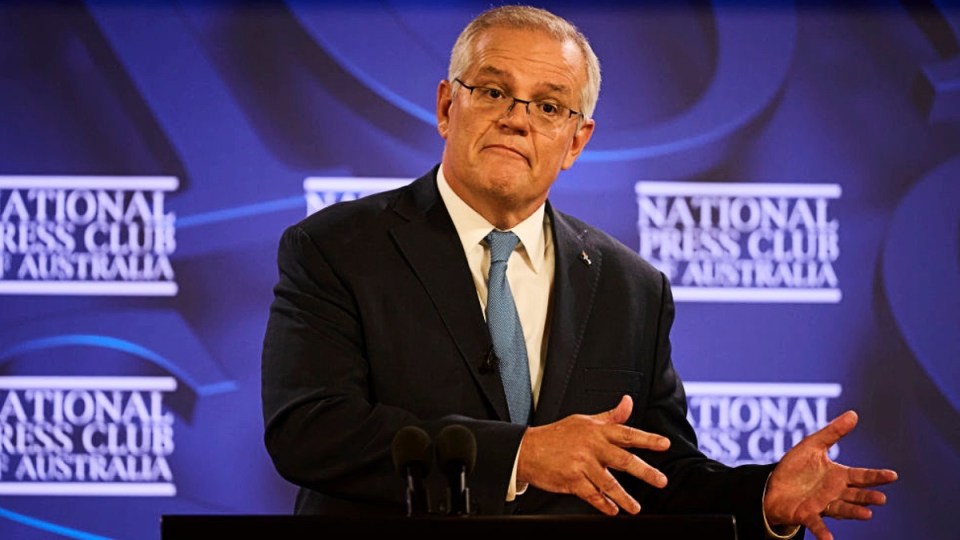 Scott Morrison was unable to say how much a loaf of bread, a rapid antigen test, and a litre of milk cost on Tuesday. Photo: AAP
analysis

The question, some members of the commentariat noted, was cheap, gotcha journalism. A stunt.

That it was. A classic of the genre, too.

But you could also bet that most of the press gallery would have fallen over themselves for a chance to catch out the Prime Minister at his first press club address of the year.

Like using Olympic-sized swimming pools or a football field as a unit of measure, putting a political leader on the spot about the cost of a loaf of bread or a litre of milk is an old mainstay of journalism only recently out of fashion.

The cost-of-living gotcha put to Mr Morrison on Tuesday – which he failed to answer – was modernised with the inclusion of a rapid antigen test, an item with a price many Australians could be excused for not naming.

Many have traced the popularity of the question to former prime minister John Howard.

But by Mr Howard’s second run for re-election, the question was already looking shopworn with the answers committed to memory by anyone running for office.

Mr Howard was known to carry a list of essential goods prices in his briefing folder.

When moderating a September 1998 debate between the former prime minister and his then-counterpart Kim Beazley, journalist Ray Martin used it as a joke: “What’s the price of a loaf of bread? No, I won’t ask that.”

It was self-parody. Martin had used the same question as a moderator in 1996 to great effect when Mr Howard was running against Paul Keating.

That the question was brought out for Mr Keating, whose interest in designer suits, antique clocks, and – latterly – red slippers had become famous, tells us much about the underlying point of applying a crude common touch test.

But the idea for the question dates back even further and has origins outside Australia.

British Prime Minister Margaret Thatcher prided herself on her powers of recall over such details.

Mrs Thatcher was, after all, a grocer’s daughter – something about which she and her admirers were not shy to remind others.

As the face of an ideology built on privatisation and attacking the size of government, Mrs Thatcher understood she could never be seen to be disconnected from everyday matters.

Mr Morrison is known neither for his antique collection nor having a strong philosophical foundation to his time in government.

But the self-styled Cronulla Sharks diehard – whose interest in rugby league, not union, appears to have been manufactured for political purposes – is facing a mounting credibility problem.

That stems more from his deeds rather than perceptions.

The opening question put to the Prime Minister at the press club outlined the basis for the view that he was out of touch, making reference to his Hawaii trip during the 2019 bushfires and his handling of the rollout of rapid antigen tests.

Queensland MP Stuart Robert was on breakfast radio damage control duty on Wednesday morning but gave the impression that if he had been asked the bread question he would have given the answer in pre-decimal currency.

The truth is that Mr Robert, a close friend and confidant of the Prime Minister’s, does not bother himself with such quotidian matters.

“From the Prime Minister‘s point of view, if he’d sat there and [his wife Jenny] was with him, she’d be able to rattle off all the prices of all the things they buy,” he said.

“I‘m sure they have that conversation.”

Based on the Prime Minister’s response, it’s clear questions about the government being out of touch are not going away any time soon.