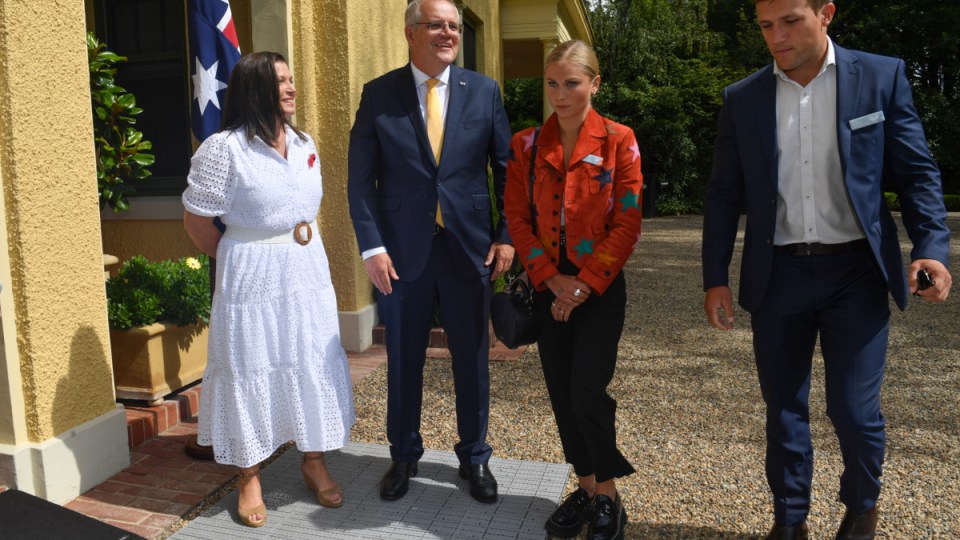 Scott and Jenny Morrison with Grace Tame and her fiance Max Heerey in Canberra on Tuesday.

Prime Minister Scott Morrison says he has “not raised any issue” about his awkward encounter with former Australian of the Year Grace Tame at The Lodge earlier this week.

Ms Tame stood stony faced during a photograph with Mr Morrison and appeared reluctant to shake his hand at a morning tea for Australian of the Year finalists on Tuesday.

Ms Tame, who was named Australian of the Year for her trail-blazing advocacy on behalf of sexual assault victims, has been a vocal critic of Mr Morrison and his government’s handling of women’s safety issues. She was also groomed and raped by one of her teachers as a teenager.

On Friday, in his first public comments since the incident, Mr Morrison said he supported Ms Tame’s advocacy and work during her tenure as Australian of the Year.

On Brisbane radio 4BC, he was asked if he and wife Jenny felt “disrespected” during the meeting – although he didn’t specifically address that.

“When Jenny and I invite someone to our home, we greet them with a smile and they’re always welcome, and that day was actually about all the finalists we came to celebrate,” Mr Morrison said.

“I haven’t raised any issues about [the incident] –  all I’m saying is we were there that day to celebrate those who had done an incredible job for our country.”

Ms Tame had widespread support online following the incident. However, she also attracted criticism from some in the government, with one LNP senator calling her behaviour “childish”.

Mr Morrison said Ms Tame was a “passionate person” who had raised “important issues”. He also said she had experienced difficulties in her life.

“She’s had a terrible life, terrible things happened to her,” he said.

“It’s just awful. And I know a lot of Australians, me included, and I support her efforts to ensure that these issues can be raised and addressed.

“Our government has done more than any other government on this issue. And that is in part because of the strong focus that has been brought to these issues.”

Mr Morrison finished by thanking Ms Tame for her time as Australian of the Year and finished with “as I say, if people come to our house Jenny and I always greet them with a smile”.

Environment Minister Sussan Ley would not say whether the comments from her parliamentary colleagues were out of line, but added people were free to speak their mind.

“Grace Tame is a force of nature and being a leader for many women across Australia,” she told ABC TV.

“The Prime Minister has done more for the issues of women than any other prime minister I have ever worked for, and in any other government.”

The government came under intense criticism for its handling of the alleged 2019 rape of former Liberal staffer Brittany Higgins in a federal minister’s office, which became public last year.