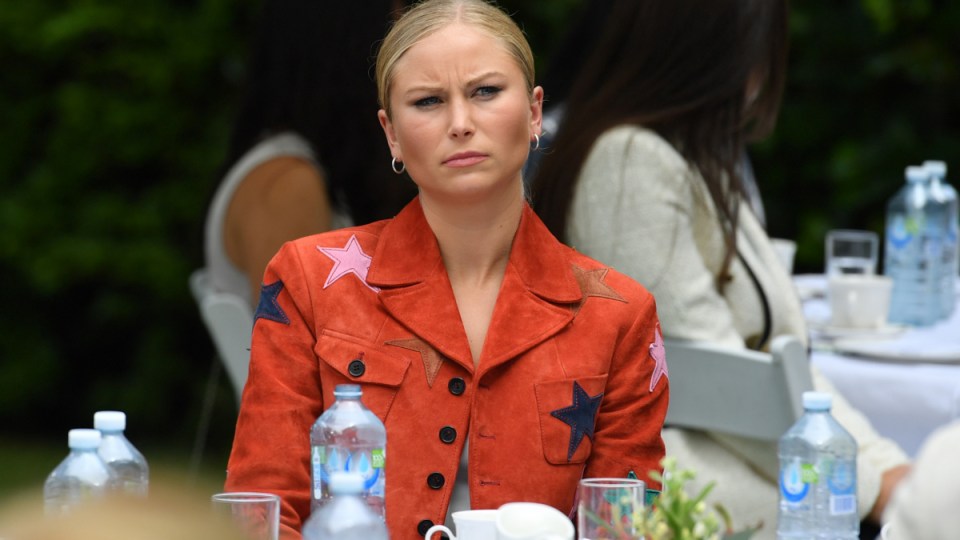 Grace Tame, the 2021 Australian of the Year, has been snapped giving Prime Minister Scott Morrison the side-eye during an awkward encounter in Canberra.

Ms Tame joined the 2022 state and territory winners of the title at an official morning tea at The Lodge on Tuesday morning.

She and fiance Max Heerey met Mr Morrison and his wife Jenny shortly before – leading to an extremely awkward series of photos.

Ms Tame was stony-faced as she posed for a photograph next to Mr Morrison, and later appeared to reluctantly shake his hand but would not meet his eyes.

“The important issues raised by last year’s Australian of the Year must continue to be addressed by all of us. It is a pity her behaviour and attacks on our Prime Minister are so partisan, political and childish. If she didn’t like being Australian of the Year she should hand back the honour,” Senator McGrath wrote on Facebook.

Ms Tame, a child sex abuse survivor who drove a campaign for important legal reform, has been openly and personally critical of Mr Morrison in her tenure as Australian of the Year.

“As much as I want to be hopeful about this summit … unfortunately, in the background, actions are still proving that they don’t get it.”

She has also been a strong supporter of former Liberal staffer Brittany Higgins, whose allegations of being raped in the then-defence minister’s office, led to several parliamentary inquiries.

In a speech to the National Press Club in March, Ms Tame took aim at one of Mr Morrison’s early responses to Ms Higgins’ revelations – when he said that he had changed his thinking, but only after discussing with his wife how he would want their daughters treated in similar circumstances.

‘It shouldn’t take having children to have a conscience,” Ms Tame slapped back after being questioned on the issue.

She had earlier revealed how, after her Australian of the Year acceptance speech a year ago – where she spoke in detail about her abuse as a teenager at the hands of her school teacher – Mr Morrison shared a quiet word with her.

“Do you know what he said to me, right after I finished that speech and we’re in front of a wall of media? I s–t you not, he leant over and right in my ear, he goes ‘well, gee, I bet it felt good to get that out’,” she said.

The 2022 Australian of the Year will be announced in Canberra on Tuesday night.