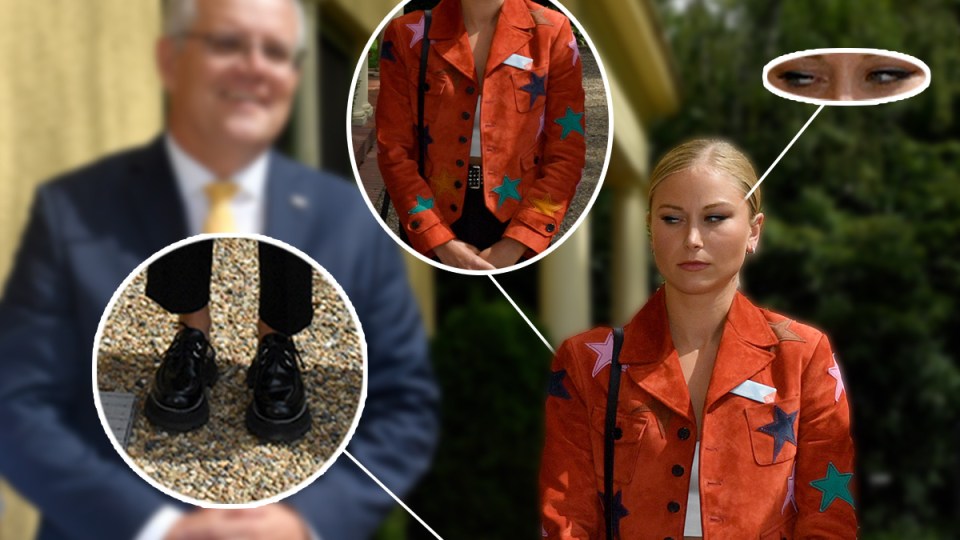 Much has been written about outgoing Australian of the Year Grace Tame and her frosty attitude when she was greeted by Prime Minister Scott Morrison at the Lodge this week.

Grace can be seen in a series of photos looking extremely underwhelmed, one in which she delivers a side eye to the grinning PM so withering it’s a work of art, or at the very least, my new screen saver.

Her choice of clothes spoke volumes too, as fashion so brilliantly can.

The first thing I noticed was that she eschewed the traditional 1950s summer garden party vibe that Jenny Morrison was going for in her white cotton dress. Grace wore skinny black pants, cool men’s style trousers that were cropped above the ankle, with pockets.

As she reluctantly walked over to shake Morrison’s extended hand, she did so with one hand still in her pocket, a masterful move with major FU body language.

Her red suede Saint Laurent biker jacket (the brand describes the colour as dark orange) was covered in large multi-coloured patch stars, which sent another tacit, and very confident message, bold, defiant, fun. It said, “I’m here, on my own terms”, which do not include fake smiling or pretending, or pleasing, or pandering.

It was the ultimate power jacket, a wonderful statement for a new generation of female activists.

Even more thrillingly, she paired the look with black Doc Martens (or a version of) loafers – which is a much better choice than high-heeled sandals if you have to stand on gravel for unwanted photo opportunities with a man who has to contextualise anything bad happening to women only by how he would feel if it involved his daughters.

Displaying ‘appropriate’ body language when meeting with a senior politician or official is very hard to do if you can’t stand them or their beliefs. While many will opine that it shows respect for the office, many of us, like Grace, have also had enough of being nice, being smiley, and putting on a dress, prettily papering over our true feelings.

While she looked perfectly put together, her outfit to me seemed to be a form of protest dressing, a sign that this young woman is committed to speaking out, even without words. If you admire or like a person, your body language is naturally going to be warmer – you will smile, make eye contact, relax your shoulders, shake hands with enthusiasm. But you don’t owe it to anyone.

2021 Australian of the Year meets with the Prime Minister at The Lodge. @SBSNews #auspol pic.twitter.com/qNbuEu8j2i

I recall a male boss berating me once about the fact I crossed my arms in a meeting with a client. I explained that it was it was pretty much out of my control, it was a reflexive response, one that usually happened when I was confronted by a tosser.

In the past, women were trained to shut up, to move on, to placate and to smile, no matter what was handed to them.

So, go Grace. It was a fabulous outfit, fit for a superstar and it silently spoke volumes.