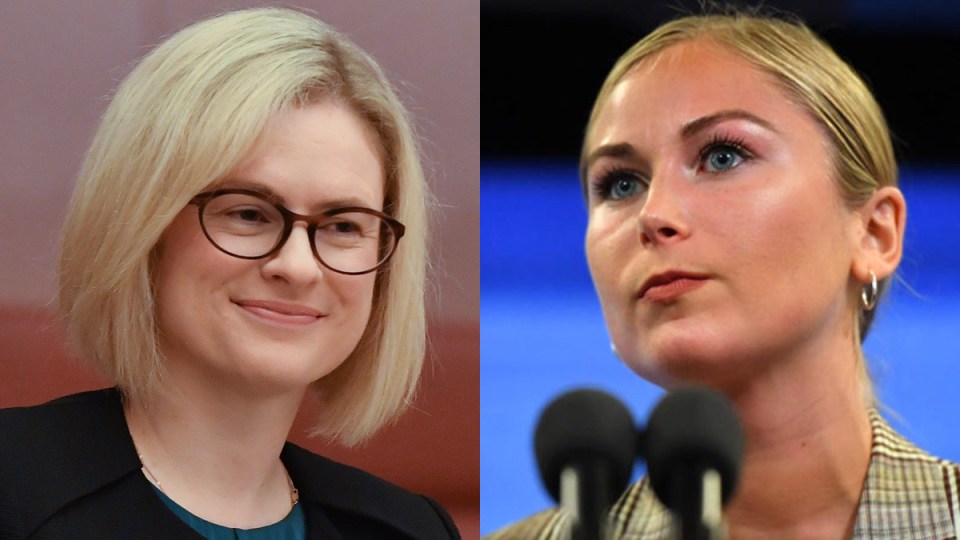 New cabinet minister Amanda Stoker has renewed her criticism of Australian of the Year Grace Tame.

Liberal senator Amanda Stoker has taken another swipe at Australian of the Year Grace Tame, who blasted the Queensland senator’s cabinet promotion.

Ms Tame has accused the new Assistant Minister for Women of supporting a “fake rape crisis” tour on university campuses.

She said last week the campaign was aimed at falsifying all counts of sexual abuse on campuses across the country.

“Needless to say that came at a great expense to student survivors who are already traumatised,” Ms Tame said.

Senator Stoker rejected the criticisms last week, saying she had spent years advocating for survivors of sexual harassment and abuse.

“I don’t think the answer is shutting down and refusing the right to speak for people who share a different point of view to you,” she told 2GB host Ben Fordham.

Senator Stoker – who also attended the first meeting of Prime Minister Scott Morrison’s women’s taskforce on Tuesday – said she had previously tried to explain the “deep harm” caused by deplatforming.

Different points of view should be spoken and heard, particularly in universities, she said. This applied even if they had the potential to offend people.

“The person who was being deplatformed had some different views about sexual assault and things like that,” Senator Stoker said.

“She should be heard; that doesn’t necessarily make her right.”

Senator Stoker, who has three daughters, said Twitter trolls might sometimes “scare” good women away from serving as politicians.

“It does speak to the attitude of some women on the Twittersphere who think that the task is tearing down people, particularly other women,” she said.

Senator Stoker has previously supported commentator Bettina Arndt, who in 2017 published an interview with the man convicted of raping Ms Tame. In the interview, the man – who was Ms Tame’s maths teacher at the time of the offences – suggested the then teenager might have behaved provocatively towards him.

Ms Arndt received an Australia Day award for her contribution to gender equity in 2020. It was roundly criticised by survivor advocates but Senator Stoker was among those to publicly back its presentation.

“This reshuffle has handed power to Amanda Stoker, another of the small but noisy ‘Christian Soldiers’ faction hijacking the national agenda,” Szubanski wrote on Twitter.

‘Utter nonsense’: Senator takes another swipe at Australian of the Year Grace Tame