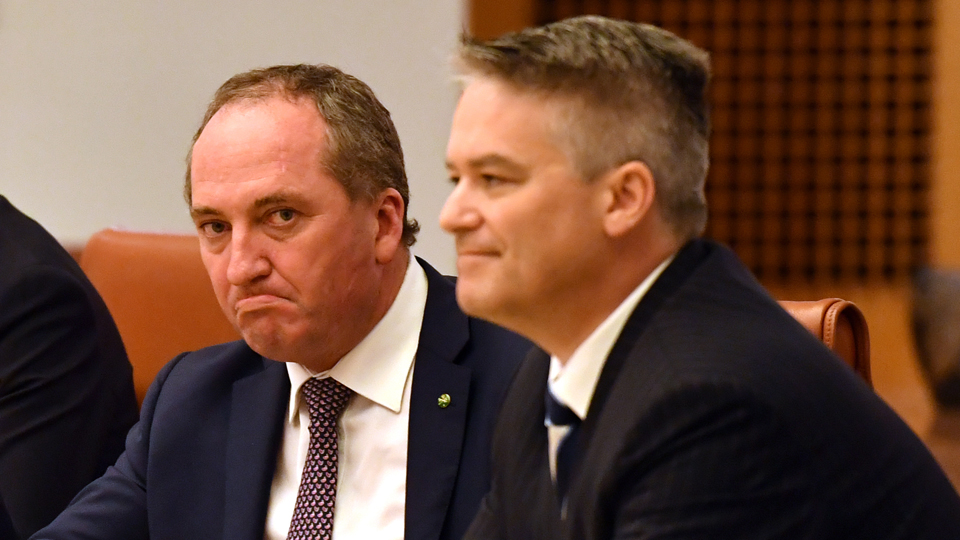 Mathias Cormann (right) doesn't believe Barnaby Joyce will follow through on his threat to cross the floor. Photo: AAP

Finance Minister Mathias Cormann has poured cold water on Barnaby Joyce’s threat that he and a disgruntled band of rebel Coalition MPs might block government legislation in Parliament.

Mr Joyce threatened to blow up government business after failing to overthrow Michael McCormack in a Nationals leadership coup on Tuesday.

The former deputy PM confirmed to The New Daily that he had warned Prime Minister Scott Morrison on Thursday that the cabinet reshuffle that followed the Nationals’ leadership turmoil had punished his supporters and risked creating a dangerous bloc of votes in Parliament.

The PM’s slim two-vote majority in the House of Representatives could be challenged by Mr Joyce and his rump of disgruntled allies – including George Christensen and Llew O’Brien – who are prepared to vote down government legislation.

“It is fair enough to say that Mr McCormack’s ministers are those who voted for him. That is, I believe, unhelpful.”

On Friday, Mr O’Brien added his own warning, telling The Australian: “You can’t take my vote for granted … I’ll be looking at everything.”

But Senator Cormann said he thought such open rebellion was unlikely.

“Obviously in the Coalition, on matters of strong personal conviction on specific issue, it’s always open to individual members to take a particular position,” he said.

Senator Cormann said previous examples of Mr Joyce crossing the floor were a long time ago. As a senator, Mr Joyce frequently used the threat to extract concessions from his own government – he crossed the floor many times while John Howard was prime minister.

In Townsville on Friday, Mr Morrison also brushed off the threat.

“When a member makes a decision on how they would vote … they do so on the basis of a long-held conviction and that is afforded to every Coalition member of parliament,” he said.

On Tuesday, after his narrow win in the leadership ballot, Mr McCormack was asked if he would reinstate Senator Canavan. In response, he pointedly “thanked Senator Canavan for his service”.

When the new front bench was announced on Thursday, Senator Canavan was not part of it.

Instead, key allies of Mr McCormack were promoted, including Mark Coulton and Andrew Gee.

Mr Joyce also spoke out against a bid to change Nationals rules to prevent leaders being knifed by requiring two-thirds of the party room’s agreement to allow a leadership spill.

“I am fervently opposed to the mooted change to diminish access to senators and members determining their leader,” he wrote in an opinion piece for The Australian.

“I am against it because its purpose is to curtail access to a vote, which is obviously a removal of a democratic attribute of our party.”