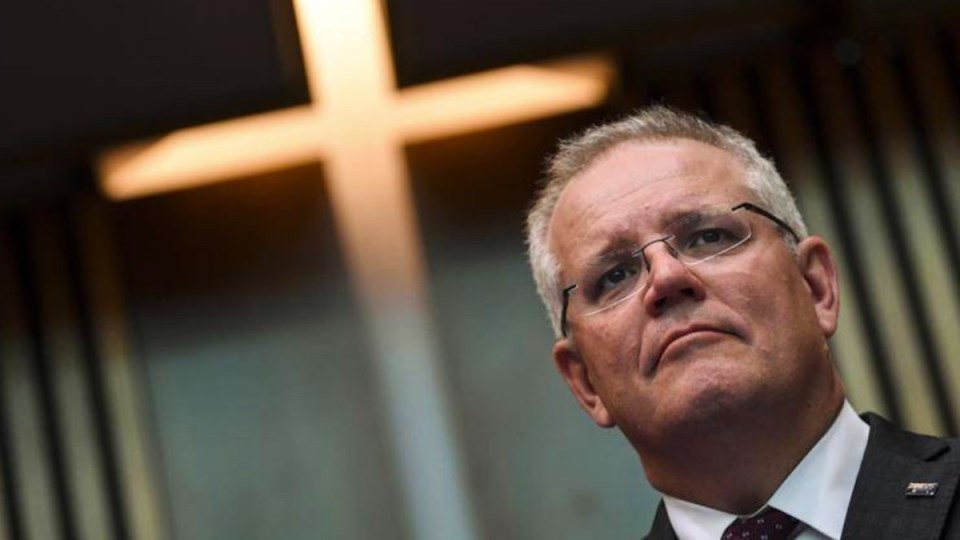 Mr Morrison made his remarks at a controversial church founded by Margaret Court.
analysis

Previously, Australian prime ministers have mounted careful campaigns to become the Secretary-General of the United Nations after leaving office.

Scott Morrison wasted no time in giving it a kicking.

The concluding notes of a sermon the former prime minister delivered at a controversial church on Sunday have revived questions about whether he had flirted with far-right tropes and conspiracies, which, since the pandemic, have centred on the claimed threat from international institutions.

Mr Morrison closed his address with the observation that nothing was more important than God, a train of thought that seemed to suddenly veer off course to set up a punchline.

“We trust in Him. We don’t trust in governments,” he said.

Attention was stirred after Mr Morrison made a show of seeming to break down in laughter and struggle to conclude the next line.

Mr Morrison’s rise to the Prime Minister’s office began with Christianity and a factional alliance in the Liberal Party that leaned on outer-suburban Sydney Pentecostalism for values – and voters.

In office, questions were often asked about whether Mr Morrison was subtly playing on the far-right motifs and conspiracies that had become especially popular among American Pentecostals and key to Donald Trump’s campaign.

In his first major foreign policy speech in the top job, Mr Morrison took aim at “globalism” – a term President Trump made central to his world view, and most often used to describe a sinister international movement undermining America.

The then-new Australian PM pitched his narrative in far more reasonable terms but the similarity struck many as uncanny.

Mr Morrison would later be awarded the Legion of Merit by President Trump and face criticism for refusing to criticise his actions during his final days in power.

It later emerged Mr Morrison was friends with perhaps the most prominent Australian follower of the QAnon conspiracy, Tim Stewart.

The series of web postings casts President Trump in a secret fight against a shadowy elite cabal that had kidnapped children for sexual abuse and to extract rejuvenating chemicals from their blood.

Mr Morrison used the term “ritual sexual abuse” in his apology to child abuse victims, as Mr Stewart predicted he would – sending followers into meltdown over what they thought was a signal.

The church has become an unexpectedly powerful vehicle for political conspiracy theories about secret plans for global government which have fast multiplied during the pandemic.

“Conspiracy theories about the United Nations have spread alongside a huge, American-style rebuttal to its entire existence as a Godless, secular organisation,” said Joel Hill, who covers conspiracy theories and the far right on a popular podcast, The Conditional Release Program.

“They think climate change is a hoax; an affront to God … and then you go onto its Satanic agendas …

Mr Hill said the former PM’s knock on the UN raised questions about what views he had held while in power.

“This was not something we had heard before,” he said.

“Was he thinking this the whole time? And, if he was, was that view guiding his policy and how he interacted with the United Nations?”

The UN was the forum at which Mr Morrison advocated for an international inquiry into the origins of COVID-19 in a fashion widely thought to have blown up relations with Beijing.

A question of purpose

Mr Morrison, he suggested, might even be parting ways with mainstream opinion with one eye on a post-Parliament career.

“He’s either going to continue to flesh this out and make some kind of persona out of it, or go the way of a quiet ex-PM.”

Benjamin Moffitt, an expert on populism at the Australian Catholic University, said Mr Morrison’s recent remarks were difficult to separate from rumours about his time in power.

“I’m by no means willing to jump on the bandwagon that Scott Morrison is a conspiracy theorist,” Associate Professor Moffitt said.

“But I do think that this (sermon) is a wink to that side of things [… of] global organisations allegedly being a tool of the elite, particularly the left secular elite, to stamp on our national sovereignty and individual rights.”

He said it was difficult to say when a perfectly mainstream conservative view about international institutions undermining national sovereignty bled into fully fledged conspiracy thinking.

His Sunday sermon did not show Mr Morrison to be on a coherent ideological mission like some American conservatives, he said, but nor did it give any insight into his motivations.

“We still don’t know who Scott Morrison is, or was, beyond the faith thing,” he said.

“It’s always these speeches to churches that seem to reveal the most about him rather than anything we got in office.”

Mr Morrison’s office did not respond to questions about the meaning of his statements and whether he thought the United Nations undermined nations’ sovereignty.

Was Scott Morrison thinking this all along? Conspiracy questions follow Sunday sermon