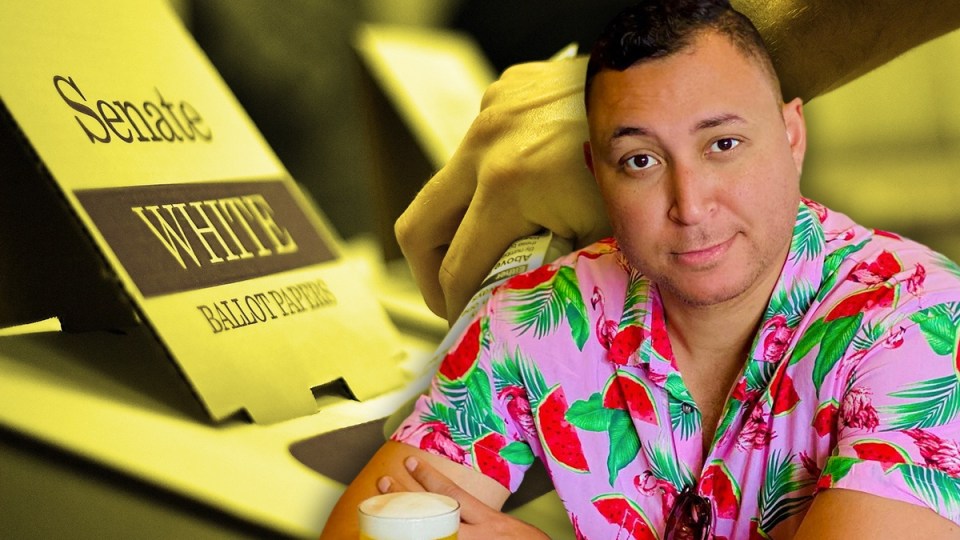 Ralph Babet is the new Senator for Victoria.

Ralph ‘Deej’ Babet (the ‘Deej’, like a lot else besides, is yet to be accounted for) is the new Senator for Victoria.

Attempts on Monday to ask him about the general philosophy he will bring to the Senate or view on particular issues of contention such as the nation’s energy future were rebuffed and his Twitter and Facebook accounts are no longer accessible.

But what information is available suggests that for the Narre Warren estate agent, who is one half of Babet Brothers (formerly ​​Nude Fit Nutrition Pty Ltd), it will be anything but politics as usual.

Social media posts show the incoming Senator is a strong adherent of a conspiracy theory that places the World Economic Forum at the centre of a plot which created and spread COVID-19 in order to dismantle capitalism and bring about left-wing world government.

“Bend the knee, peasants!” he captioned a photograph of the logo of the WEF, the international NGO regarded with much suspicion by hardcore conservatives.

Mr Babet declared the WEF’s founder Klaus Schwab as the real winner of the May 21 elections after polling day.

An appreciation of heterodox economics might make him a more loyal proponent of the UAP platform than the party’s last class of MPs, state and federal, who deserted in months.

(The Clive Palmer vehicle also brought Jacqui Lambie to public life and in this Parliament could exercise balance of power in a progressive Senate.)

Mr Babet’s most strongly held views seem to have been formed in  opposition to lockdowns, which helped him win a plum spot on the UAP ticket in a state where the party reckoned a long state lockdown made its pitch to voters strongest.

“The Labor and Liberal coalition must be held responsible,” he said before the election. “The damage done will echo into generations.”

Which, unlike others’ turfed-up Senate preferences, clears him of any accusation of being disinterested in politics – or that he lacks a constituency.

Well over 1.5 million Australians voted for one of the three right-wing parties grouped together by political scientists as part of a broad “freedom movement” opposed to lockdowns. Militant anti-incumbency doubtlessly helped.

“I literally see the future of Australia hinging on people like me,” Mr Babet said in an audition video for party bosses.

A knack for generating enthusiasm on the margins of the internet appears to be his political strongpoint.

His reputation in far-right circles peaked in September 2021 when a young apprentice was videotaped bleeding and holding his head during an anti-lockdown protest in Melbourne.

Mr Babet’s account on Telegram, a social media service that protects anonymity, posted an account blaming the injury on the police acting as part of a tyrannical power grab.

“THEY CRACKED HIS SKULL,” a screen capture of his social media account shows. “This is what Victoria Police did to this man.”

The post’s popularity came just before a false report took hold in American far-right circles, which cast COVID restrictions in Australia as a canary in the coal mine, that the young man had been killed by the cops.

An obituary was written and circulated.

But the young man was alive, as he would later confirm on Facebook.

And his head had been hit in an entirely coincidental altercation with a shopkeeper, witnesses and friends told him, over an apparent dispute relating to not paying for alcohol.

“The story was completely wrong, but the thing is he just kept pushing,” says Joel Hill, who revealed Mr Babet’s role during contemporary coverage of the riot on The Conditional Release Program.

The podcast is a deeply researched and current look at events on the political far right that would otherwise be impossible to pin down.

That is when, Mr Hill says, the moment the incoming Senator made his bones in a global protest movement but also kicked along a harmful untruth.

“If you’re shameless, then they will just shower you in attention – and potentially money – but definitely influence,” he said.

“There was a hysteria around about the riots [being] a symbol that Australia had fallen [… and become] some kind of dictatorship.

“And this [false story] went all over the world as a sign of what the police were doing.”

The facts are by the by in a fast-moving social media world built on suspicion of authority (when the shopkeeper’s testimony got around, many on Telegram suggested the boy had recanted his story under duress).

Mr Hill says that past experience suggests the election of even a marginal voice to the Senate espousing conspiracy-minded views could lead to the Senate floor being used to provide sound bites and legitimacy to shows like the wildly popular and unfounded Infowars.

“I guarantee that he will be presented as speaking on behalf of the Australian government,” he said.

But former MP Craig Kelly, who lost the election but plans to maintain a role as the UAP’s federal director, says Senator-elect Babet will be an asset to the Parliament.

“His background is Mauritian and he is a dead ringer for Dwayne [‘The Rock’] Johnson.

“The freedom vote was very split, but there [was] a good 10 to 12 per cent of the electorate that supported that.

“We were very much maligned and criticised, I think, time is showing that we were correct.”

Mr Babet said he would speak to the press after his election was officially proclaimed by the electoral commission. But he did not respond when presented with a copy of a post made by an account under his name during the September protests.