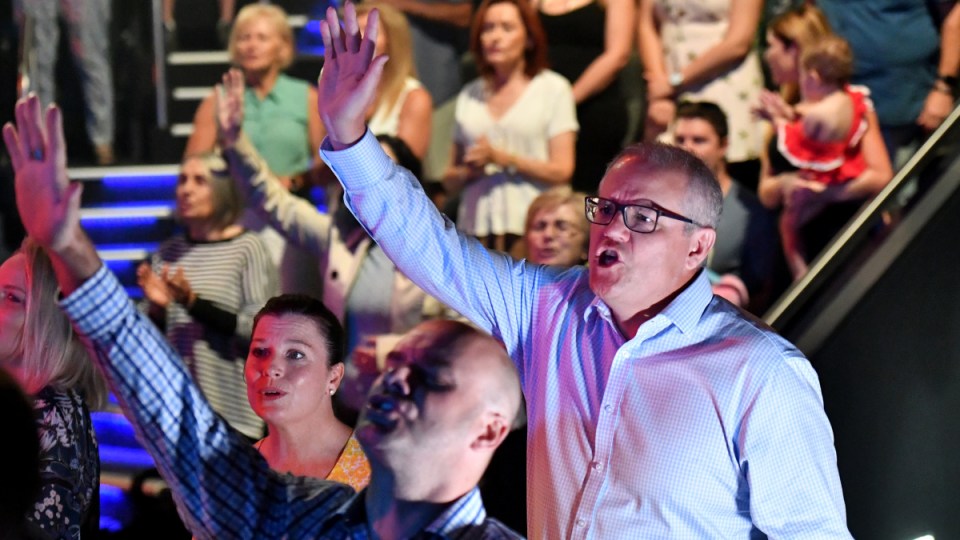 Scott Morrison at his Pentecostal church in Sydney in 2019. Photo: AAP

In his second post-election public appearance in a week, the former PM spoke at the 27th anniversary of the Victory Life Centre in Perth.

“Do you believe that if you lose an election God still has a plan for you?” Mr Morrison asked the assembled congregation, to rapturous applause.

“I still believe in miracles; God has secured your future; all of it’s true.”

The line was used in Mr Morrison’s 2019 victory speech after he emerged as the unexpected winner of a national election and, more recently, his concession speech.

Ms Court was a staunch supporter of the former prime minister who, like her, is an outspoken Pentecostal; she publicly prayed for his re-election earlier this year.

The church, which faced some criticism for telling followers that the “blood of Christ” would protect them from COVID-19, received some $500,000 in JobKeeper payments despite its revenue decreasing only marginally.

Mr Morrison spoke about rising mental illness before riffing on “anxiety”, which he characterised as a state of spiritual deficit or part of “Satan’s plan”.

“God knows that anxiety is part of the human condition,” he said.

“How do I know that God knows that? Well, he spent three years here on Earth with 12 very anxious guys. Every single day.”

The former PM said he was talking about an everyday state of mind, not a clinical disorder caused by “biological issues” or “brain chemistry”.

Mr Morrison also cracked wise about a seemingly biblical chain of disasters that had afflicted Australia in recent years.

“One day I was at the national security committee meeting of the cabinet with Josh Frydenberg, [a] great friend,” he said.

Mr Morrison has long blended politics and religion, and specifically the Pentecostal faith, from his faction of the Liberal Party’s preference for recruiting candidates backed by large church communities in Sydney’s west to the prayer group of MPs who served as his praetorian guard while in power.

He closed his sermon by telling the faithful they were, more than anything else, unique creations of God.

“Identity politics [is] something I’ve always railed against,” he said.

“The idea that you’re defined by your gender or your sexuality or whatever it happens to be.

Ms Court won 24 grand slam singles titles and the most championships of any woman in tennis history.

She said she was called to the ministry after being visited by Jesus Christ one morning while washing up after breakfast.

Ms Court has often been the centre of controversy for anti-gay remarks including that modern women’s tennis was “full of lesbians” and that teaching gay rights in schools was an attempt to influence children’s minds as “Hitler did [… and] Communism did”.

Unsuccessful campaigns have been mounted for her name to be removed from a tennis stadium at Melbourne Park.