The Coalition has made marginal inroads into Labor’s lead, but only independent candidates have emerged as winners from a tight week of campaigning, a new Roy Morgan Poll has found.

Labor maintains an election-winning lead on a two-party preferred basis, 54.5 to 45.5 – a gain of half a point to the government, its second consecutive rise, according to the poll taken from April 18 to April 24.

Voters were as evenly split on the headline measure of support as they have been for six months, after a week dominated by national security and the late withdrawal of Labor leader Anthony Albanese due to COVID-19.

But there was equally no sign of a revival in either of the major parties’ primary votes, which remained unchanged and with the government again with its nose in front on 35.5 per cent to the ALP’s 35 per cent. 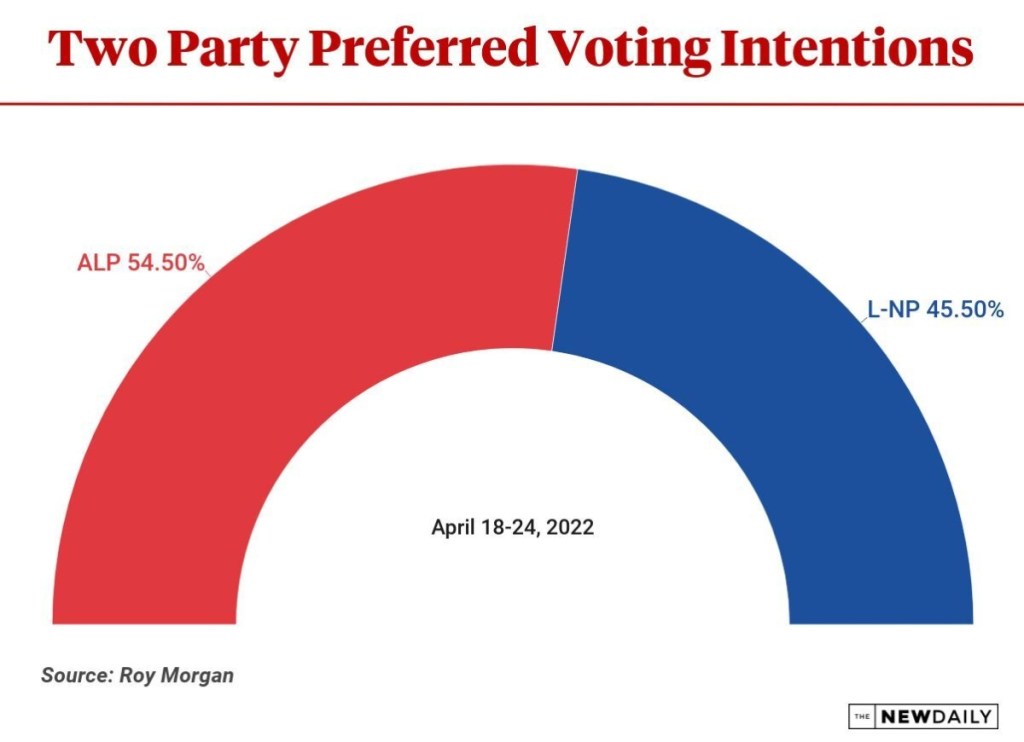 Roy Morgan chief executive Michele Levine said the poll suggested it was increasingly likely that neither party would emerge from the May 21 election with the ability to form government in its own right.

“Opposition Leader Anthony Albanese is set to emerge from COVID-19 isolation protocols tomorrow and rejoin the campaign, and with just over three weeks to go until election day the chances of Australia’s first hung parliament in over a decade are increasing,” Ms Levine said.

The Roy Morgan online-telephone poll of 1393 voters has a margin of error of 2.6 per cent.

The main moves were a reversal in gains recorded by the Greens, after a week with a heavy focus on national security.

The Greens dropped two points to return to 12 per cent.

Independent candidates won the only substantial increase in the nationwide poll; their support was up 1.5 points to reach 8 per cent.

The other parties grouping was up half a point to 3.5 per cent. One Nation and the United Australia Party remained unchanged at 4.5 per cent and 1.5 per cent respectively.

Although headline measures remained unchanged, support for the parties did vary according to voters’ age when compared to the previous week, which suggests the focus on national security and the Solomon Islands-China security pact has influenced the electorate.

“The two major parties traded blame over who was responsible for allowing this to happen,” Ms Levine said.

“The debate appears to have helped the LNP gain ground among older voters.”

Among electors younger than 35, the ALP picked up a swing, after preferences of two percentage points this week. 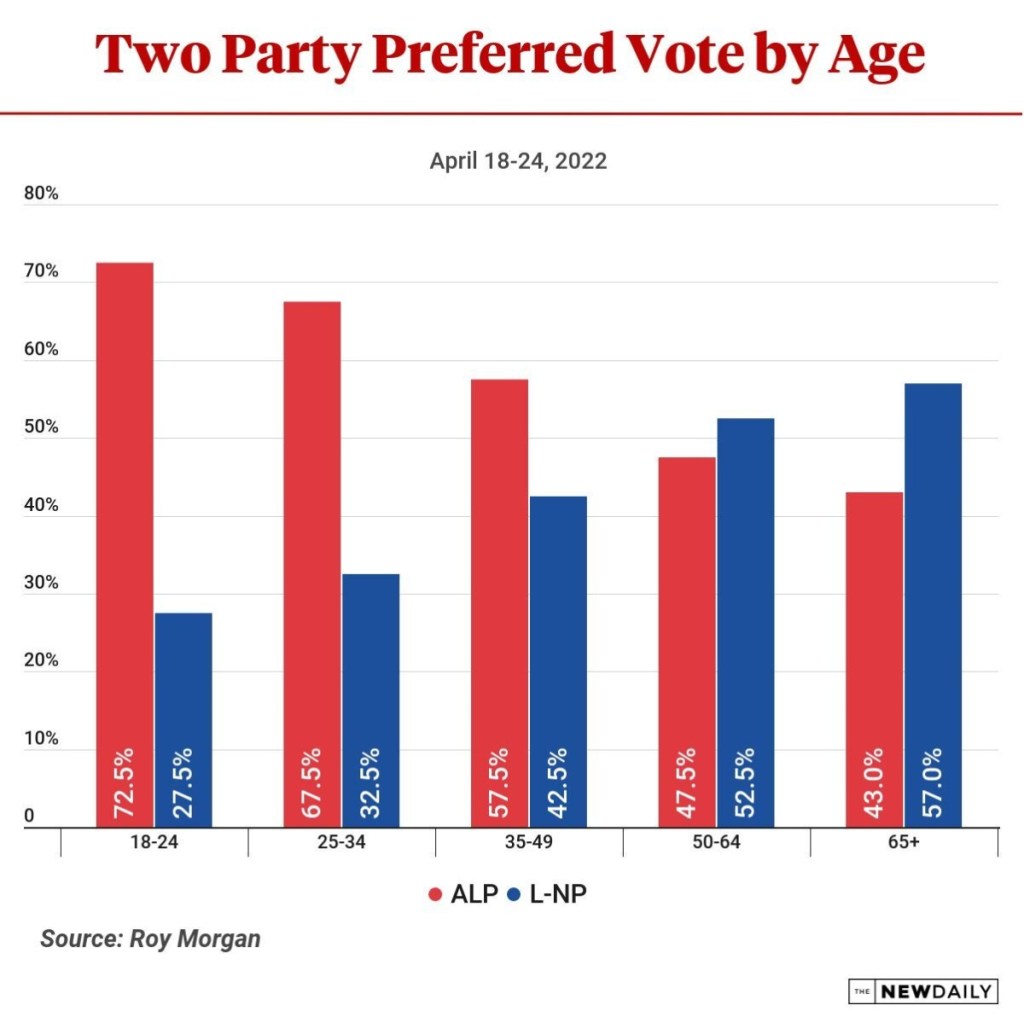 Voters are divided into four roughly equal groups based on age. The average Australian voter is 50 years old.

Labor was also knocked back from its lead position in Queensland after the LNP vote share after preferences surged six points into a 54.5 to 45.5 per cent lead.

The Coalition consolidated its advantage in Western Australia to emerge in front by the same margin.

This is the first time the Coalition has led in two states since mid-September.

National security and the Solomon Islands was again the focus of campaigning on Tuesday.

Foreign Minister Marise Payne said Labor had been manipulating national security for an election advantage even though, she argued, there was little difference between the major parties on Pacific diplomacy.

“This election presents a choice between a government that recognises the issues and a Labor Party that demonstrably plays politics,” Senator Payne said.

That criticism came after Labor revealed a $525 million expansion to overseas development assistance for the Pacific, a plan for deeper engagement with the region that also included a new category of visa for Pacific workers.

In a radio interview, Mr Albanese seized on comments made on Tuesday by former prime minister Malcolm Turnbull, who described a Solomons security pact with Beijing as a failure of diplomacy.

“The Solomons is an absolute failure of foreign policy and that’s been recognised by [former foreign minister] Julie Bishop, by Malcolm Turnbull and by other commentators and experts,” he said.

The proportion of voters not declaring a voting intention fell by half-a-point to 6 per cent.