The poll, conducted while Mr Morrison faces accusations of bullying and racism, shows Labor extending its lead in the past week on a two-party preferred basis by 1.5 percentage points to 57 per cent to 43 per cent.

With an election campaign tipped to be called in less than a week, the poll has the Opposition ahead in all six states and regaining its momentum after a week in which public focus shifted onto damaging allegations against Mr Morrison.

Labor’s primary vote rose over the week by four percentage points to 39.5 per cent, with the poll finding gains coming almost exclusively from independent candidates and minor parties. 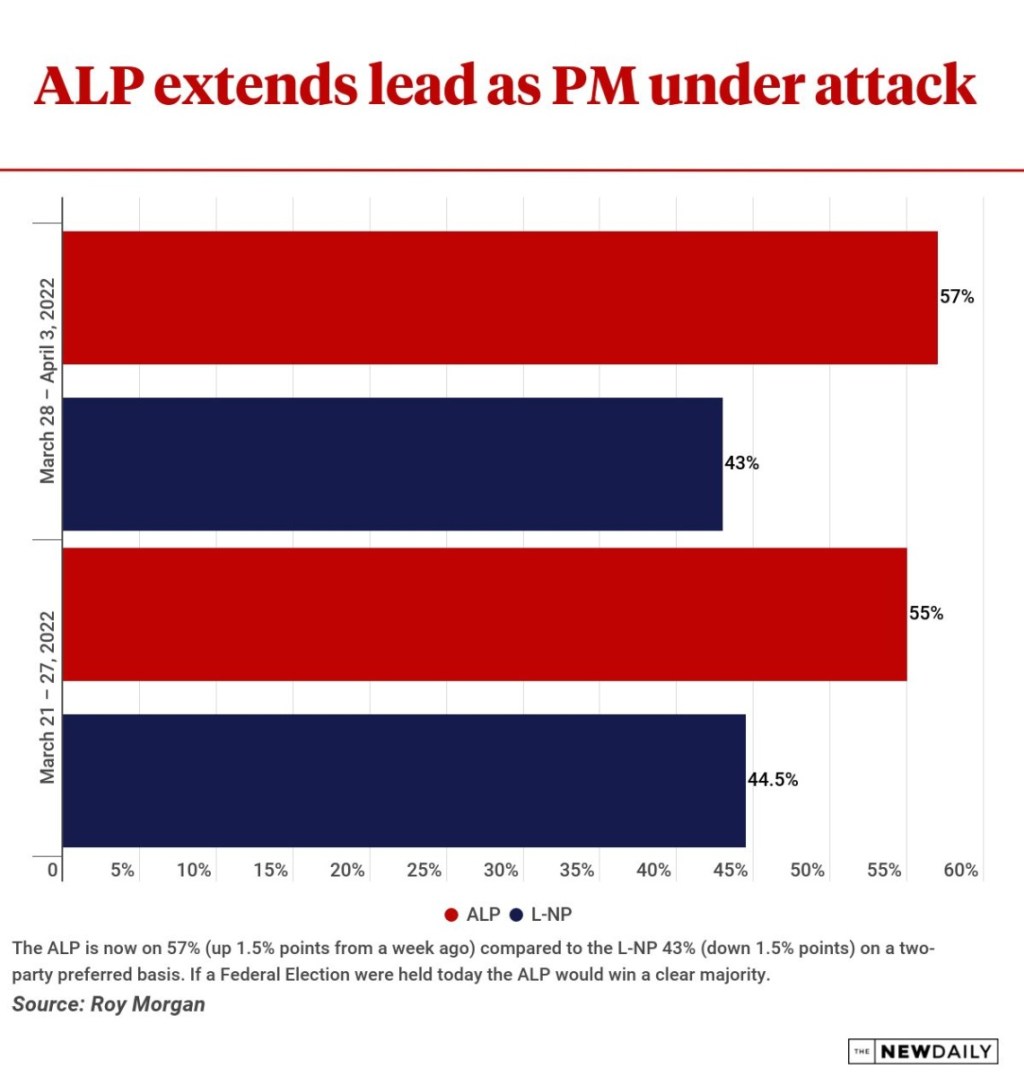 The margin between the parties is expected to draw closer between now and election day, but the Roy Morgan poll shows the degree to which a divided government is struggling to dictate terms.

The internal tensions are unlikely to be resolved this week amid allegations the Prime Minister had dealt in racially charged politics were repeated on Monday evening.

Shortly after the budget NSW Liberal Senator and conservative faction stalwart Senator Concetta Fierravanti-Wells took to the floor of the Senate to label Mr Morrison an autocrat who was unfit to be Prime Minister.

She also revived the issue of Mr Morrison’s conduct during an ugly 2007 preselection battle for the seat of Cook, in which his opponent, Michael Towke, alleged he had been subjected to racist slurs by Mr Morrison.

“There is an old political axiom that ‘disunity is death’ – and the factional rivalries on display currently in the NSW Liberal Party, and highlighted by the fiery speech by Senator Fierravanti-Wells, are still yet to fully play out,” Ms Levine said.

Mr Morrison has strenuously denied the allegations, which have been laid out by his former rival Mr Towke and a preselector for the seat of Cook in statutory declarations.

Liberal elder, and Mr Morrison’s predecessor as the MP for Cook, Bruce Baird, on Monday rejected allegations that the Prime Minister had vilified Mr Towke during a preselection fight for the seat.

Mr Baird said he never heard any racist comments, or allegations of bullying or dirty tricks.

However, the party divisions only show signs of deepening this week.

On Monday Mr Towke told the Ten Network the Prime Minister had “used race in the past” for political purposes and had been repeatedly untruthful.

Yet further light will be cast on Liberal divisions on Tuesday, with the NSW Supreme Court set to rule on an attempt by Mr Morrison to force a takeover of the party’s NSW branch to install hand-picked contenders and prevent challenges to sitting MPs.

“One of the big-ticket headlines in the federal budget was a slashing of the fuel excise by 22c per litre,” Ms Levine said.

“This cut to the fuel excise has been positively received but, at least for now, has been overshadowed by the continuing infighting.”

This  Roy Morgan survey found that the proportion of undecided voters was at 7 per cent, an increase of two points.

Support for “other parties” fell by 1.5 percentage points to 3 per cent with independent candidate support also down slightly, by 1 point to 9 per cent.

The split phone-online poll of 1367 voters ran from Monday to Sunday and shows the ALP in pole position in all six states and pulling further away from the government in all but South Australia.

Unusually, the unfavourable result for the Coalition came as voters expressed greater faith in government.

The rating is typically aligned to support for the incumbent government but its rise despite a flatlining in the Coalition primary vote is likely a result of a sharp drop in petrol prices recorded over the past week.

The rating for early April found that one-third of Australians (33.5 per cent, or a rise of 0.5 points) believe Australia is headed in the right direction.

A majority of the country, or 52 per cent, believed the opposite.

Are you an undecided voter? The New Daily wants to hear from you as part of a weekly series counting down to election night. Email us at editorial@thenewdaily.com.au if you are interested in taking part