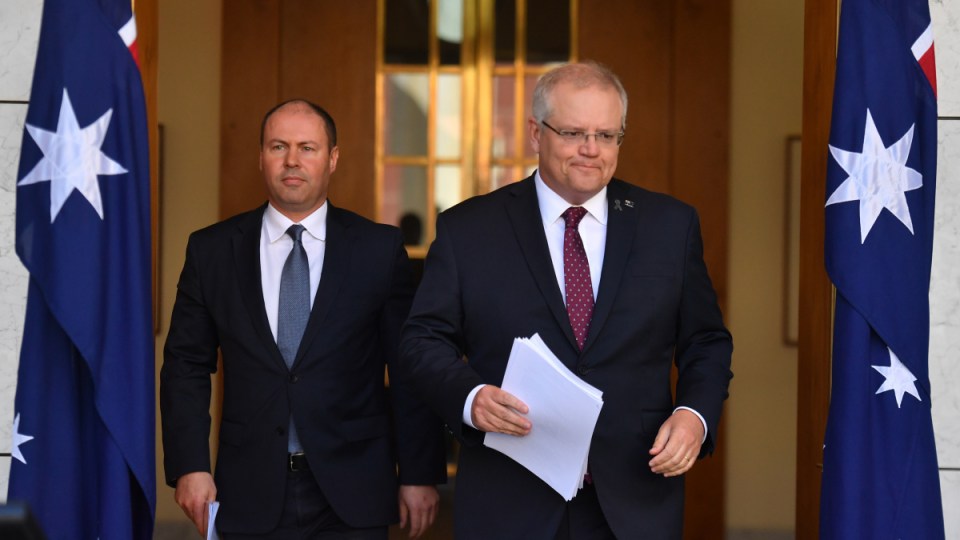 Scott Morrison has ruled out major cuts to spending before the election. Photo: AAP

Prime Minister Scott Morrison has promised no drastic cuts to spending as the federal government prepares to deliver a pre-election budget this month.

After the economic challenges of COVID-19, net debt is projected to peak at more than $914 billion in June.

Despite some corners of his base urging otherwise, Mr Morrison has ruled out “massive cuts” to government spending to tackle the mounting debt pile.

“That’s not on our agenda,” Mr Morrison said on Monday at a conference organised by the Australian Financial Review.

“You don’t need to go down that austerity path.”

The Prime Minister also said he had “no interest” in either hiking the GST or introducing a carbon tax.

Neither move was particularly unexpected.

Pre-election budgets are rarely tough. But despite such constraints, Mr Morrison’s speech suggested there are still several open questions about the kind of budget the government will deliver.

Mr Morrison spoke on Tuesday of the impact that global instability unleashed by Russia’s invasion of Ukraine will have on national economies.

One of the most significant effects could be on the defence budget.

“Global economics is downstream from global politics,” he said.

“Geopolitics have shifted such that Western liberal democracies now need to make strategic security an overriding imperative for their economic policy.”

That could be interpreted as foreshadowing a change on defence spending, something Mr Morrison has been especially keen to discuss before the election.

The government this week announced plans for a $10 billion base for a new fleet of nuclear-powered submarines.

Building the submarines will come at a further (inflation-adjusted) cost of at least $116 billion – and likely much more than that – according to the Australian Strategic Policy Institute.

“It’s likely to be at least two decades and tens of billions of dollars in sunk costs before Australia has a useful nuclear-powered military capability,” the think tank recently found.

That compares to an existing annual defence acquisition budget of $14.3 billion.

The other unknown of the invasion of Ukraine is its effect on the national economy and the government’s approach to budget choices.

Mr Morrison said an era of “radical uncertainty” that began with COVID-19 has not yet ended.

There has been speculation that rising demand for certain fuel sources could prove to be a budget boost, as Russia’s economic isolation plays havoc on international energy markets.

But the effect of global economic contagion on Australia will likely be more significant.

“External conditions, including trade, don’t look good at all for Australia,” said Professor Markus Brueckner from the Australian National University.

“The demand for Australian exports in general will be adversely affected by what’s happening in Ukraine and politically worldwide.

“That’s something that could possibly get much, much worse depending on how it unfolds.”

This uncertainty and a possible rise in interest rates could leave the government feeling more constrained in its fiscal policy choices.

One particularly crucial policy area – especially before an election – will be what a budget offers workers who have seen their pay packets shrink.

Last year’s budget forecast a modest drop in wages, but inflation has made the decline far greater than expected.

“For quite a long period now, really since the end of the Global Financial Crisis, we have had relative wage stagnation in Australia, even as we’re seeing wage growth in other parts of the world start to re-emerge,” said Gareth Bryant, a specialist in political economy at the University of Sydney.

The government still has billions of dollars in decisions it has taken but not yet announced as part of its pre-election pitch.

Among the options before it are whether the government will follow recommendations to increase funding to sectors such as aged care and child care.

Also under consideration is a proposal to continue a tax break for low- and middle-income workers known as the LMITO or ‘lamington’, worth between $255 and $1080 every year.

Pre-election budgets tend to be more generous, but voters will also be asking how enforceable their promises are.

With the government looking increasingly weak in the polls, its election commitments could be regarded as the political equivalent of fantasy football.

But Mr Morrison is still foreshadowing a negative campaign on economic management.

He said the Opposition planned to “snatch the reins” of the economy away from business and hand them over to “fellow travellers”.

Dr Bryant said such a political environment was more conducive to Labor adopting Coalition measures than opposing them, making the budget influential even if the government does not stick around.

“Labor might seek to neutralise some of the things that are promised,” he said.

“Just as important as what is in this budget is how Labor responds to it.”