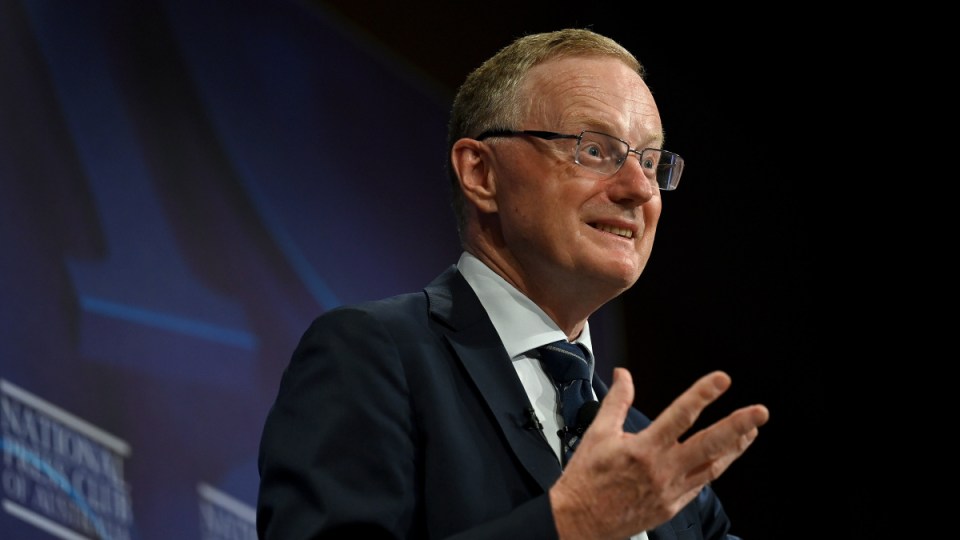 RBA boss Philip Lowe is in no rush to hike interest rates because he's not worried about inflation. Photo: AAP

Reserve Bank governor Philip Lowe has calmed fears about an imminent interest rate hike, saying Australia should be patient and wait for living standards to rise before slamming the brakes on the economic recovery.

In his first public remarks of 2022, Dr Lowe said on Wednesday that while inflation has “surprised on the upside”, price rises for goods like electronics and petrol aren’t fast or broad enough to merit an “immediate” rise in rates.

Instead, the RBA wants to wait for uncertainties in the outlook for wages and global supply chain disruptions to clear up before taking action.

“We are in a position where we can take some time to obtain greater clarity on these various issues,” Dr Lowe told the National Press Club.

But if inflation does keep rising faster in Australia, it’s still “plausible” that the central bank will be forced to raise rates in 2022, Dr Lowe explained.

“There are a lot of uncertainties, both on the supply side and the labour market dynamics,” he said.

“Because inflation is not that high at the moment, we can wait to see how those uncertainties resolve.

The RBA is now forecasting annual wages growth of 3 per cent in 2023, which implies that a rise in interest rates is still 12 months away.

RBA stares down the market

Dr Lowe’s remarks are a direct rebuke to economists and investors who have been predicting the RBA will lift interest rates in 2022 for the first time since November 2010 because underlying inflation has reached 2.6 per cent.

The RBA targets inflation between 2 and 3 per cent, leading markets to price in four rate hikes over the next year in response to the price data.

Economists believe rates need to rise to cool inflation, but this would also add to home owners’ mortgage bills and push up the unemployment rate.

That last part concerns Dr Lowe, who said on Wednesday that because inflation is not as high in Australia as in economies like the US, the RBA should be patient and allow the COVID recovery to continue unabated.

“I’m not worried about inflation getting out of control,” Dr Lowe said.

“We want to get the unemployment rate down, for the first time in 50 years, to below 4 per cent … we’re prepared to sit for a while.”

Key to the RBA’s thinking about inflation are two huge uncertainties about how living standards will change for most households in 2022.

The first is rising inflation – specifically the price increases that are causing cost-of-living headaches for households during the pandemic.

Dr Lowe said the global supply chain crunch that has delayed deliveries and made some products unavailable during COVID-19 is behind much of the inflation we’re seeing in Australia, because it raises costs for business.

He used electronic goods as an example. Usually, the price of these items falls over time as technology improves, helping lift workers’ living standards.

But during the pandemic, the cost of these goods soared as supply shortages for key ingredients like computer chips slowed down global markets.

It was a classic supply and demand story: Demand surged as people bought computers, tablets and other household appliances to occupy themselves during lockdown, and supplies couldn’t keep up due to factories and shipping ports closing down to prevent the coronavirus from spreading.

The combination of the two pushed up costs for businesses, which then passed them onto consumers through higher prices.

“We’ve all sat at home and done shopping and then there’s been an interruption to the global supply of [computer chips],” Dr Lowe said.

So, setting up a home office has become pricier during the pandemic, but Dr Lowe doesn’t think these prices will keep rising for much longer.

That’s because this type of supply-side price pressure usually resolves itself over time – businesses adapt to new processes while manufacturers rush to make more of something when there’s good money to be made.

In fact, this is already happening to a certain extent, with computer chip and international freight prices falling from their earlier highs.

“There will be some normalisation as these problems resolve,” Dr Lowe said.

This indicates the RBA is prepared to ride the current inflation wave so that more Australians can find higher-paying jobs over the next year.

Those higher-paying jobs are the second reason Dr Lowe isn’t worried about an inflation outbreak – there just aren’t enough of them around.

Dr Lowe said on Wednesday that the outlook for wages growth is still uncertain in Australia, given it has been stagnant for a decade.

The RBA wants inflation to rise – within reason – in response to higher wages growth (ideally above 3 per cent annually), because this shows prices are responding to higher living standards, not just business costs.

Thankfully, Dr Lowe said there are signs that wages growth is rising as bosses respond to lower unemployment by luring workers with higher salaries.

But he warned things are moving quite slowly due to “inertia” caused by multi-year enterprise agreements and Australia’s modern award system.

Basically, businesses are stingy and don’t want to hand out pay rises unless they have to.

The way wages are determined for many workers in Australia makes this worse by allowing businesses to delay these decisions.

That’s good in one sense, because it means wages won’t rise too fast and force businesses to pass on higher costs through price rises, which could actually reduce purchasing power for households, Dr Lowe said.

“It’s unlikely that wages growth picks up to problematic rates,” he said.

“The pick up in inflation here is still going to be, in broad terms, fairly modest.”

But it’s bad in another sense, because it shows that no one actually knows if workers will get their first decent pay rise in a decade this year.

Dr Lowe said there’s “no contemporary experience” about how wages will respond to unemployment falling below 4 per cent, as is forecast.

“There are many unanswered questions – we are unlikely to know the answers quickly,” he said.

The RBA has lifted its wages growth forecasts though and now expects pay packets to rise by 2.75 per cent annually in 2022 and by 3 per cent in 2023.

This suggests the first interest rate rise will be in 2023, but Dr Lowe was careful to avoid putting a date on his latest guidance after being criticised for doing so last year.

‘Fairly modest’: Why RBA chief Philip Lowe isn’t worried about inflation getting out of control