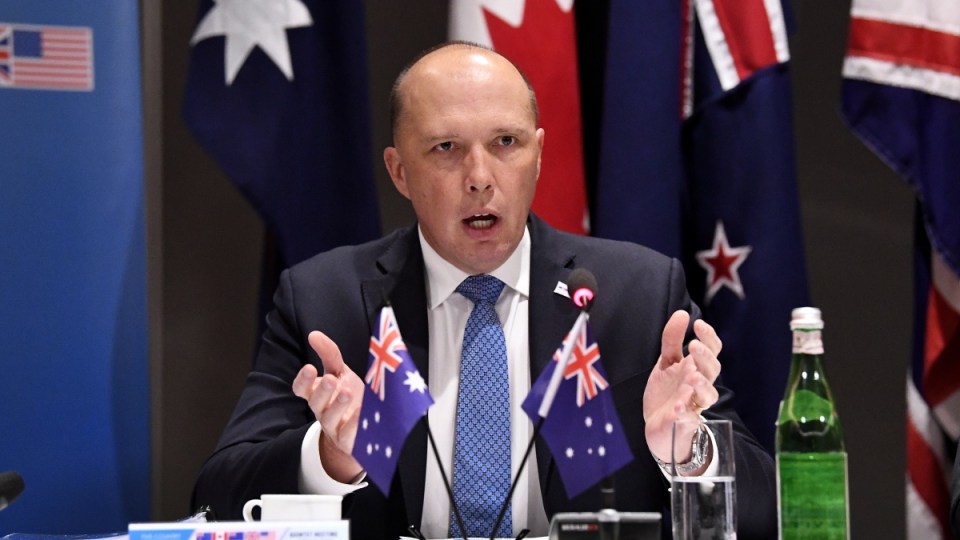 Peter Dutton has suggested that the design of nuclear submarines could be announced before the election. Photo: AAP

Defence Minister Peter Dutton has hinted at a plan to fast-track Australia’s nuclear submarine program, prompting questions about whether the government can keep pace with its pre-election national security rhetoric.

Mr Dutton said on Sunday that the government would make an announcement in a “couple of months” about the design of Australia’s proposed fleet of nuclear-propelled submarines.

When the submarine plan was unveiled in September, the government pledged to spend 18 months examining its options for delivering such a “sensitive” technology and a profoundly complicated shift in defence strategy.

The minister suggested the government had now adopted an accelerated timeline during an interview on ABC’s Insiders on Sunday in which he also entertained and did not rule out sending military aid to Taiwan should it be invaded by China.

“We want peace to prevail in our region, but you don’t have peace if you are arguing from a position of weakness,” Mr Dutton said.

“I think we do whatever we can to deter China from acts of aggression in our region.”

Procuring the submarines, which have greater speed and range, is part of a trilateral AUKUS alliance with the United Kingdom and United States to contain a growing Chinese regional presence.

However, given Australia’s ongoing and infamous difficulties with submarines, doubts are being raised about whether a shorter timetable is achievable.

Labor’s defence spokesman, Brendan O’Connor, told The New Daily the Opposition had not been consulted about any change of plans, and said there was no evidence of the government’s ability to achieve them.

“We’re yet to see anything backing it up,” he said.

“Despite claiming they would keep Labor updated, we haven’t had a single update from the Morrison government on this strategically important decision which is, quite frankly, appalling.

“We call on the government to provide a detailed plan in the national interest, not [Prime Minister] Scott Morrison’s political interest, as to how it will rectify delayed and over-budget defence contracts.”

Mr O’Connor said the opposition would seek a formal update based on the minister’s comments.

“I guess they want to sort of lock it in before the election and make it very hard for Labor to walk back from that, should Labor win the election,” said Marcus Hellyer, an expert in submarines from the Australian Strategic Policy Institute.

The planned timeline for adopting the submarines has been criticised for potentially leaving a hole in the nation’s defence capabilities as the new fleet is completed and the current Collins class submarines rapidly become obsolete.

Some experts suggest submarines constructed before the current 2040 deadline is possible, but only with bipartisan consensus and also an openness to constructing at least some of the fleet overseas.

“Dutton has said a few things suggesting you could do it by the first half of the 2030s,” Mr Hellyer said.

“I think the only way you can really do that is if you build the submarines overseas, or at least build the first one or two overseas and use that, essentially, as a kind of training program for Australian workers.

“If you set up a shipyard, bring the design here, train your workforce, develop all of the human skills, but also a lot of supply chains, I just don’t think you can really bring that schedule forward much at all.”

The local production of submarines in South Australia has become a hot-button political issue and Australia has no local domestic nuclear infrastructure.

Mr Hellyer said the focus on nuclear submarines was part of a shifting strategic narrative about the defence of Australia in which security challenges were no longer cast globally or regionally, but immediately.

“They’re not just talking about a China versus Taiwan kind of conflict or a South China Sea conflict or something quite a long way away from Australia,” Mr Hellyer said.

He said the narrative was one of a defensive Australia, where force could be used against Australia, and that there is bigger, stronger and “more dire” narrative going on.

“You can say, ‘well, he’s crying wolf and exaggerating’; you can disagree with him on that; but that’s the strategy they’re taking,” he said.

“[It’s] a much more direct threat and, ultimately, when you get down to it, China can reach out and touch us.”

Labor has attacked Mr Dutton for openly countenancing a hypothetical in which Australia would help arm a threatened Taiwan.

“I don’t recall any defence minister in our history, certainly recent history, that would ever answer a question in the positive about a hypothetical question on whether we would find ourselves engaged in a full-blown war with a nuclear superpower,” Mr O’Connor said.

Mr Dutton’s comments about sending arms to Taiwan on Sunday are a step down from remarks made in November, when he said it would be “inconceivable” that Australia would not join America in the event of conflict with China over Taiwan.

Cross-bench Senator for South Australia Rex Patrick said that promises on submarines made before an election should be treated sceptically.

“Any announcement in the next two months ought to be judged for what it would be, a political announcement made in an election campaign,” he told The New Daily.

“It would have to be viewed in the context of the government’s track record of massive failures in defence procurement.

“When the Future Submarine was announced in 2009, construction was to start in 2016. Here we are in 2022 with almost $3 billion spent with nothing more than a study under way to show for it.”