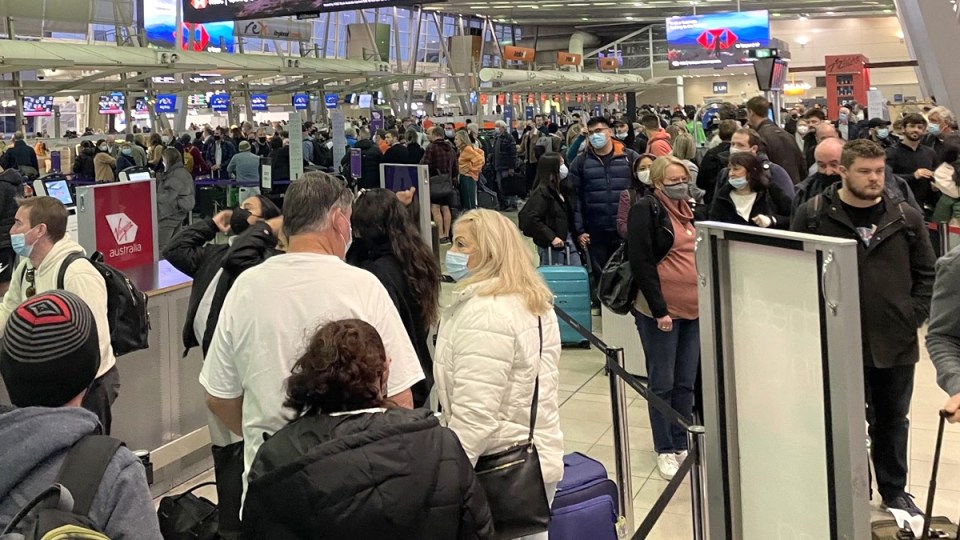 Travellers are being told to brace for more airport chaos over the upcoming school holidays as airports scramble to fill thousands of vacancies – with long queues again in major centres on Friday.

Passengers were forced to queue up for hours over the Easter period as staff shortages and surging demand put massive strain on airport services.

There were also reports of more chaos in Sydney and Melbourne on Friday morning, ahead of the Queen’s Birthday long weekend. By 8am, queues in both cities were outside the terminals,.

Melbourne Airport management warned travellers to arrive early, saying it was expecting its busiest day since the pandemic began. Domestic travellers were urged to arrive two hours before flights, while it was three hours for those heading overseas.

Issues with bag drop-offs were also reported in both major cities, leading to further chaos and delays.

Aviation experts have warned travellers to brace for more similar delays over the winter break.

Aviation consultant Neil Hansford, chairman of Strategic Aviation Solutions, said the queues over the July school holidays are likely to be as long as they were over Easter, as the airports will struggle to fill their vacancies in time.

“I don’t believe that the facilities are there to get people recruited, interviewed, but most of all, get their security clearance and be trained in time to be effective,” Mr Hansford said of the airport recruitment drive.

In a sign of the severe labour shortages plaguing the travel and tourism industries, both Sydney Airport and Melbourne Airport have announced jobs fairs ahead of the school holidays in July.

Sydney Airport CEO Geoff Culbert said 15,000 jobs were lost during the pandemic and 5000 roles had yet to be replaced – “even though everyone started recruiting heavily when borders looked like opening”.

“Our security contractor and ground handlers have been advertising jobs since December and have brought 500 staff on board since the start of the year, but they have another 1200 roles to go which is incredibly challenging in this market,” Mr Culbert said.

During the Easter rush, one Sydney passenger said it took more than an hour to get through security alone, with only five of 17 bays reportedly open to customers.

A spokesperson from Melbourne Airport told The New Daily on Thursday that the airport was working to avoid a repeat of the Easter travel chaos.

But they conceded baggage handling was proving to be a persistent pain point, as airlines were struggling to put on enough staff with customers returning en masse and many workers stuck at home with COVID.

Transport Workers Union national secretary Michael Kaine said the airports would struggle to fill their vacancies as the work was low-paid and insecure.

“The pandemic exposed the vulnerabilities of aviation,” Mr Kaine said.

“Alongside low-paid part-time or casual jobs, there’s more risk than incentive to join the industry.”

But the airports are hoping financial perks will lure workers back, with advertisements for Sydney Airport baggage handlers offering sign-on bonuses of $2000.

Echoing Qantas CEO Alan Joyce’s earlier claims that Australians were no longer “match fit” travellers after years spent at home during the pandemic, Mr Hansford said passengers also had to take their fair share of blame for the delays over Easter.

Mr Hansford told The New Daily many had forgotten what was required of them at the airport and needed to educate themselves before flying again.

“If the travellers educated themselves about what’s required, and [airports] build up the numbers of security staff, they will go through both domestically and internationally a whole lot better,” he said.

He offered the following tips for passengers heading to the airport over the July school holidays:

Holiday chaos returns to airports – with worse yet to come