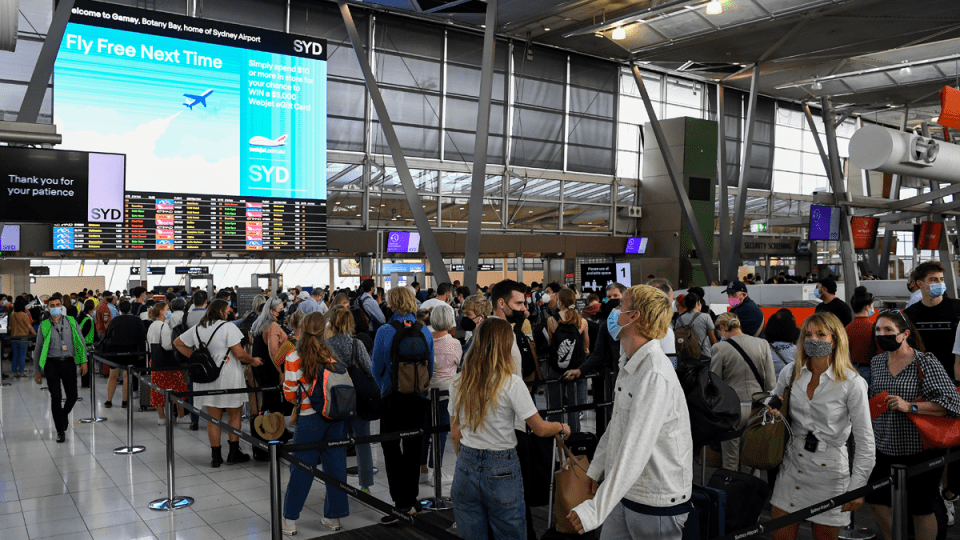 Airport delays in Sydney and Melbourne are part of a global trend. Photo: AAP

Sydney Airport is preparing for its busiest day in two years as travellers fly out for Easter holidays, with staff shortages straining systems and forcing passengers to queue up.

Passengers have been advised to arrive two hours early after a lack of workers, eased restrictions and a busy holiday period created a perfect storm for delays.

But Sydneysiders and Melburnians are not alone in the struggle.

“Unfortunately, this is an industry-wide issue, and airports and airlines around the world are experiencing similar challenges,” a Sydney Airport spokesperson told The New Daily.

Dublin Airport in Ireland has asked passengers to arrive three-and-a-half hours early, while Manchester and Birmingham airports in the UK have had delays caused by staff shortages since March.

The mayor of Manchester has even floated the idea of calling in police officers and fire fighters to manage the crowds of travellers.

“We obviously need to work with them to work through these issues and make sure we’re managing those things and giving the right information to the public and being clear about the plan to get things to an acceptable level,” Mayor Andy Burnham said.

The airport’s general manager Karen Smart stepped down last week amid the chaos.

Meanwhile, the operator of Frankfurt Airport in Germany – which also operates a handful of airports in other countries – warned it would have to cancel flights amid similar security staff shortages.

For all of these airports, including in Australia, there is no clear end to the delays.

The Transport Workers Union has blamed the staff shortage on “illegal outsourcing” and redundancies for Qantas check-in staff, as well as security roles that have been contracted to private operators.

These roles can’t be filled overnight.

He told The Sydney Morning Herald that “it may take some time for [airport staff] rosters to recalibrate”.