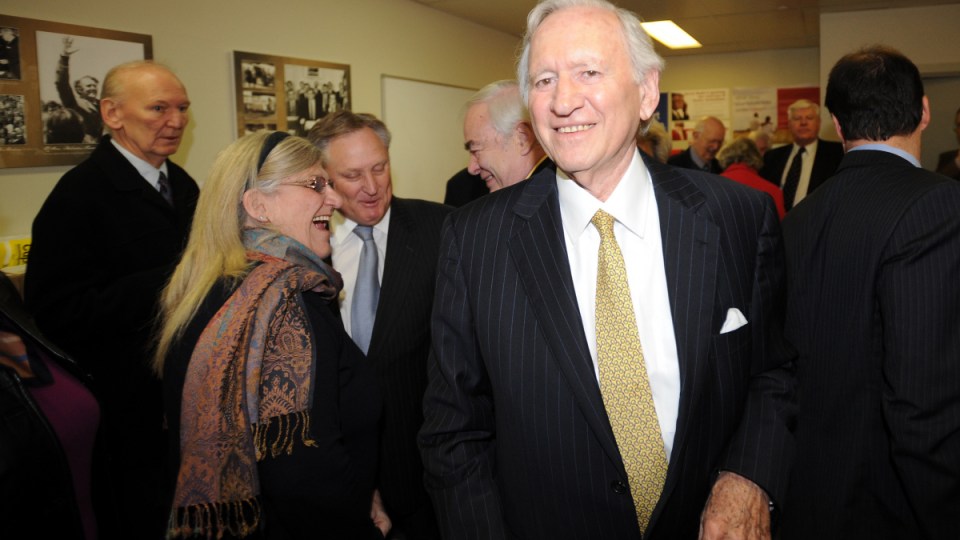 Andrew Peacock was a towering figure in the Liberal Party. Photo: AAP

Former prime minister and one-time political rival John Howard has paid tribute to Liberal Party stalwart Andrew Peacock after his death at the age of 82.

“Andrew was a hugely significant figure in Australian politics of the 70s and 80s, and played a dominant role in the development of the Liberal Party,” Mr Howard said.

Mr Howard said his former colleague and rival was a “quite outstanding foreign minister” who forged important relationships with countries in the region and deepened the US alliance.

Mr Howard acknowledged the pair had their personal differences but said they had “well and truly buried the hatchet” by the time he was appointed US ambassador.

“He brought to all that he did in public life a great amount of style, flair and distinction,” Mr Howard said.

Mr Peacock, dubbed the “colt from Kooyong,” served in Parliament for over 28 years, was a minister in the Gorton, McMahon and Fraser governments and led the Liberal Party to two elections.

He was also foreign minister from 1975 to 1980 in the Fraser government.

Mr Peacock died on Friday at his home in the United States.

“His passing will be mourned by those on both sides of the political aisle because he pursued his politics as he pursued life – with vigour, with dignity and with the utmost decency.”

Mr Frydenberg said he was honoured to follow in his footsteps as Kooyong MP.

Mr Peacock launched Mr Frydenberg’s first campaign to win the Kooyong seat in 2010 and was one of his referees for pre-selection, along with Mr Howard.

Mr Peacock and Mr Howard – who served as prime minister for 11 years – tussled for the Liberal leadership for much of the 1980s.

Prime Minister Scott Morrison said in a statement on Friday night that “Andrew Peacock was a great Australian and a treasure of the Liberal Party”.

“He was one of our greatest Liberals who helped shape Australia and the Liberal Party over three decades,” Mr Morrison said.

“To his wife Penne and his family, Jenny and I extend the sympathies of the government and the Liberal Party.”

“To my beautiful, loving, most caring, thoughtful, generous and brilliant father, you will be so greatly missed, your guidance and deep love for us will live in my heart, we are absolutely devastated,” Ms Peacock said.

“Daddy, love you more than the world, please continue to look after us all. You will live within us forever and ever.”

Former Victorian premier Jeff Kennett tweeted that he and Mr Peacock “shared a long friendship of political highs and lows”.

In 1987, Mr Peacock and then-Victorian opposition leader Mr Kennett were recorded in a phone call using colourful language about Mr Howard, who was federal Liberal leader at the time.

“On a personal note, I remember him as a very close friend,” Mr Kennett said.

“We lived so much of our political lives in each other’s company, both the highs and the lows,” Mr Kennett said.

“It’s sad that he’s gone. But unfortunately, we’re all going to follow him.”

Mr Morrison said Mr Peacock had the difficult job of being minister for the army during the Vietnam War.

He was also minister for external territories and was instrumental in gaining Australian acceptance for independence for Papua New Guinea, whose government later made him an honorary chief.

After leaving Parliament in 1994, Mr Peacock served as Australia’s ambassador to the United States from 1997 to 1999.

Respected by all sides of politics

Mr Frydenberg said Mr Peacock’s passing would be “mourned by those on both sides of the political aisle”.

“Because he pursued his politics as he pursued life — with vigour, with dignity and with the utmost decency,” he said.

Former Labor prime minister Julia Gillard expressed her condolences the family of Mr Peacock, who she said would “be remembered fondly for both his political career and diplomatic service to Australia”.

Opposition Leader Anthony Albanese said he was “a respected former liberal leader, minister and ambassador to the US who advocated for liberal values over so many decades”.

Mr Albanese said Mr Peacock was a “fine Australian” who would be sadly missed by his family and many friends.

Mr Peacock was known for encouraging younger MPs from all political parties.

“He was distinguished for that sort of standing across the aisle,” Dr Hewson said.

“He didn’t play favourites. He wasn’t tribal in today’s sense.

“I think he took people on their merits. He encouraged people and encouraged them to meet their full potential.”

Health Minister Greg Hunt, who was recruited by Mr Peacock as a young student, remembered a “true parliamentarian”.

Mr Howard said Mr Peacock was respected by both Republicans and Democrats during his time representing Australia in the US.