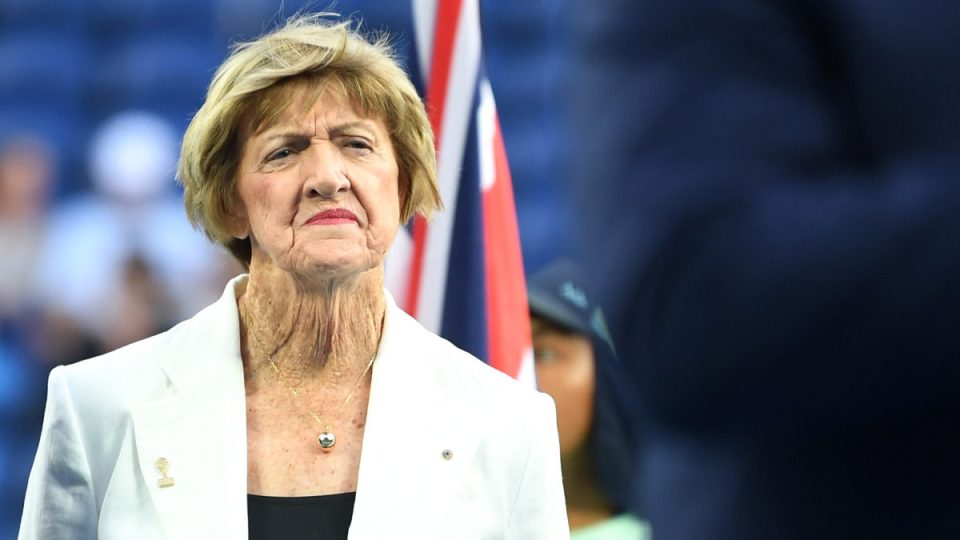 Backlash is growing at the decision to give controversial tennis champion Margaret Court an Australia Day honour. Photo: Getty

The appointment of tennis champion Margaret Court to Australia’s top honour was meant to be a closely-guarded secret, but the award has already attracted high-level criticism.

The 78-year-old’s appointment as Companion of the Order of Australia (AC) in this year’s Australia Day Honours List was due to be revealed late on Monday, but instead hit social media on Friday.

The award is to recognise Court’s “eminent service to tennis” as winner of a record 24 grand slam singles titles and a mentor for young athletes.
In an interview with AAP this week she described the honour as a great privilege.

Court’s tennis achievements have more recently been overshadowed by her views on homosexuality, conversion therapy, same-sex marriage and transgender people.

Victorian Premier Daniel Andrews on Friday said he did not support Court receiving the honour.

I don’t believe that she has views that accord with the vast majority of people across our nation that see people, particularly from the LGBTQ community, as equal and deserving of dignity, respect and safety,” Mr Andrews told reporters.

Mr Andrews said he was “sick of talking about that person every summer”, when debate over whether to rename Margaret Court Arena inevitably reignites.

“We finish up having this discussion in one form or another every single summer.

“I would prefer not to be giving oxygen to some of these views. but you have asked me a question and I have answered it honestly.”

The Premier said the decision to include Court in the Australia Day honours was not his decision.

“That is not a matter for me. You might want to speak to [the people who made the decision] about why they think those views, which are disgraceful, hurtful and cost lives, should be honoured,” Mr Andrews said.

“All my life I’ve had those views and I was just saying what the Bible says,” she told AAP on Friday.

“I should always be able to say my views biblically, being a pastor and helping people with marriages and family. And I’ll never change those views.

“I have nothing against people – I love the people. We have them come into our community services, all kinds – whether they’re gay, transgender, whatever they are.

“We never turn a person away and I think it’s been tried to be made out that I’m somebody that I’m not really. And I think that is very sad.”

“This is a completely independent set of processes. It is an announcement that will be announced on that day. It is a system that recognises the full spectrum of individuals across this country. I can’t comment on that,” he said.

“It’s clear for everyone to see that making her a Companion of the Order of Australia has nothing to do with tennis,” he tweeted.

Calls for Margaret Court Arena to be renamed are repeated each January as the attention of world tennis turns to Melbourne for the Australian Open.

Tennis greats including Martina Navratilova, Billie Jean King, John McEnroe and modern-day champion Andy Murray have all led calls for Court’s name to be removed from Margaret Court Arena at Melbourne Park in light of her views.

In 2020, Court garnered controversy at the Australian Open when she was honoured for the 50th anniversary of her grand slam.

Tennis Australia invited Court to Melbourne Park at the 2020 tournament to recognise the 50th anniversary of her 1970 calendar grand slam, while saying it disagreed with her “personal views”.

Navratilova and McEnroe made international headlines at the time when they held up a banner on court that indicated their support for renaming Margaret Court Arena after Indigenous champion Evonne Goolagong.

Navratilova was also seen to take the umpire’s microphone to make a comment, but the sound was cut by officials.

She later apologised for unwittingly breaching protocol by holding the on-court protest, but said she stood by her statement.

“I got in trouble. I am sorry I broke protocol. I had no idea there was this kind of protocol,” Navratilova said.

“Had I known, I would have done it differently, but I would still have tried to make my statement, which is basically:

You name buildings after not what people just did on the court but also off the court, the whole body of work.”

According to the website of the Governor-General, people are appointed a Companion of the Order of Australia for “eminent achievement and merit of the highest degree in service to Australia or to humanity at large”.

Any Australian can be nominated for the award, with nominations assessed by the Honours and Awards Secretariat and considered by the Council of the Order of Australia before recommendations are made to the Governor-General.