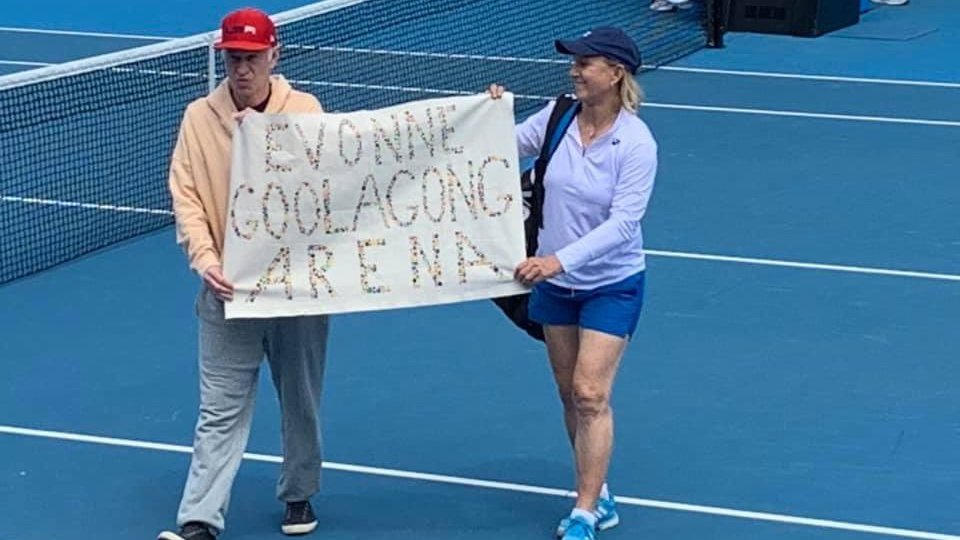 John McEnroe and Martina Navratilova make their point on Tuesday. Navratilova has since apologise for the "breach of protocol". Photo: Twitter

Navratilova and McEnroe on Tuesday held up a banner on court that indicated their support for renaming Margaret Court Arena after indigenous champion Evonne Goolagong.

Navratilova was also seen to take the umpire’s microphone to make a comment, but the sound was cut by officials.

Tennis Australia later issued a statement saying the high-profile pair had breached protocol and said it was “working through this with them”.

It said Tennis Australia embraced “diversity, inclusion and the right for people to have a view, as well as their right to voice that view”.

“But the Australian Open has regulations and protocols with respect to how any fan, player or guest can use our facility, the event and the global stage it provides.

“This is to ensure the integrity of our event.

“Two high-profile guests have breached these protocols and we are working through this with them.”

“Yes, we have free speech in a democracy, but that doesn’t mean that free speech doesn’t have consequences,” the winner of 18 grand slam titles wrote.

“When Margaret goes out of her way to single out a group of people and tell them they don’t deserve equal rights, that they are less than good parents, that they are not godly, that’s not merely free speech.

She argued that the stadium should be renamed for Goolagong.

“Evonne is the embodiment of what a role model or hero truly is,” she wrote.

“Her heritage, her success against the odds, her Hall of Fame career and her exemplary life off court, in which she has given so much of herself to so many causes, are all attributes we can celebrate wholeheartedly.”

McEnroe has said Tennis Australia should have done more to denounce Court’s views, while on the eve of her 50th anniversary honour said the 77-year-old was the “crazy aunt” of Australian tennis.

“There’s only one thing longer than a list of Margaret Court’s tennis achievements – it’s her list of offensive and homophobic statements,” McEnroe said.

“Tennis Australia is facing a dilemma – what do they do with their crazy aunt? Its solution? We will recognise what she did in 1970, but we won’t celebrate the person.

“Huh? It doesn’t work that way. You can’t separate the person from her achievements.”