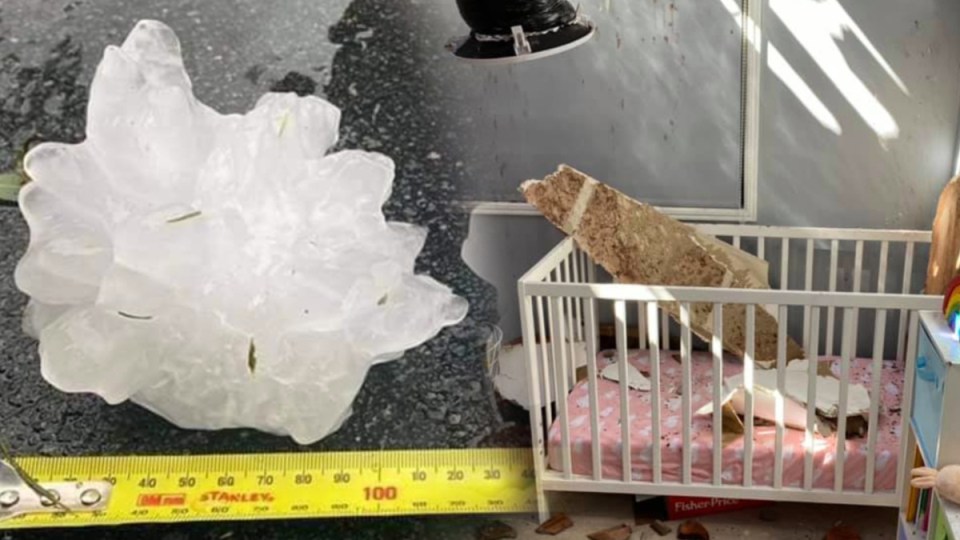 Hay fever one minute. Sunburn the next.

Then homes are pelted with 15-centimetre hail stones.

Meanwhile, our island neighbours in the Pacific are being battered by the year’s strongest winds.

What on Mother Earth is going on?

On Saturday, hundreds of Queensland homes and cars were pounded by hand-sized hail stones during a series of supercell thunderstorms in the state’s south-east.

Giant hail was reported in Logan, south of Brisbane, while hail up to 7cm in diameter fell at Ipswich and the Lockyer Valley to the city’s west.

The Queensland Fire and Emergency Service recorded more than 1800 calls for help, most relating to building damage, while at least 42,000 homes were left without power on Saturday.

The aftermath has left many Queenslanders shaken and in some cases, homeless.

‘She was crying her eyes out’

“It was like a hundred footballs hitting the roof and the cars,” he said, adding some of the bigger hail stones were as large as 15cm in diameter.

Mr Charles said he and his wife Ruby, 28, initially tried to cover their car with towels to protect it from hail damage, but it was too late.

Within minutes, water started shooting out of lightbulb sockets, air-conditioning vents collapsed and parts of the roof caved in above them, sending plasterboard and debris on to the floor.

“We turned around to go back and check on our nine-month-old and a hail stone had come straight through a metre away from her cot, and had bounced up into her cot,” Mr Charles said.

“She was crying her eyes out.

“I was scared for a while there, just lost for words, especially seeing it had come so close to hitting my daughter.

“It had shocked me so much, past beyond the point of tears. I didn’t know how to feel. Nothing like that had ever happened before.”

Mr Charles said his family had since relocated to his parents house in Ipswich.

“We’re lucky nobody got hurt and we’ve got somewhere to go,” he said.

Extreme weather around the world

Typhoon Goni – the world’s most powerful typhoon in 2020 – smashed into the southern part of the Philippines’ main island, Luzon, on Sunday and has since resulted in at least 10 deaths.

The super typhoon barrelled into the island with maximum sustained winds of 225km/h and gusts of up to 310km/h, triggering volcanic mudflows that engulfed about 150 houses.

A father and son were among nine people killed in the hard-hit province of Albay.

About a million Filipinos rushed to safer ground before Goni made landfall on Sunday morning, but the weather bureau predicted “catastrophic violent winds and intense to torrential rainfall” were headed for Bicol provinces, and several  other regions south of Manila.

Between 19 million and 31 million people could be affected, including those in danger zones, the disaster management agency said.

Meanwhile in Vietnam, at least 35 people are dead and 50 are missing after Typhoon Molave – the most powerful to hit the country in 20 years – set off landslides, sunk boats and cut power to nearly two million people.

Heartbreaking… these sisters in Hue province, central Vietnam, are sorting through their possessions after typhoon Molave damaged their home and soaked everything they own. Today has been a difficult day for many. pic.twitter.com/gjIUYgbOlR

The immediate focus for rescuers is on three villages in the country’s central region, where landslides killed at least 19 people and are suspected of burying more than 40 others in thick mud and debris.

In the United States, Hurricane Zeta has killed at least six people after striking  south-eastern Louisiana on Wednesday, leaving millions without power along the Gulf Coast.

Four people died when trees fell on their homes, while a 55-year-old Louisiana man died after touching a drowned power line and another drowned in Mississippi.

As of Thursday afternoon, nearly two million people were still without power in Georgia, Louisiana, Oklahoma, Alabama and Mississippi.

Does it have anything to do with La Niña?

“When we have a La Niña, we’re more likely to have large rainfall events, but there’s no relationship I know of between La Niña events and superstorms, like the one that hit Brisbane with the large hail,” he said, adding those severe hail storms usually happened once every five or 10 years.

“These large thunderstorms with huge hail, they’re pretty rare and they’re not something we can tie into a La Niña event.”

However, Dr McGregor said he wouldn’t be surprised to see the global number of storms increase as a result of climate change.

La Niña is a phase of the El Niño-Southern Oscillation, a pattern of ocean and atmospheric circulations over the Pacific Ocean that brings slightly cooler but wetter conditions to many parts of Australia.

What’s going on around the country?

Queensland and our Asian neighbours aren’t the only regions that suffered freak weather events over the weekend.

Most of the calls were from suburbs in Sydney’s south that were pelted with hail, and areas on the state’s south coast that experienced flash flooding.

Rock falls interrupted traffic on the Snowy Mountains Highway roads and also cut power to thousands across the state.

Meanwhile in Victoria, crisp autumn-like and windy conditions persisted across the state during its first weekend out of coronavirus lockdown.

Warm weather is expected on Monday, and a top of 29 degrees is forecast for Melbourne Cup Day on Tuesday, before a cool change returns later in the week.