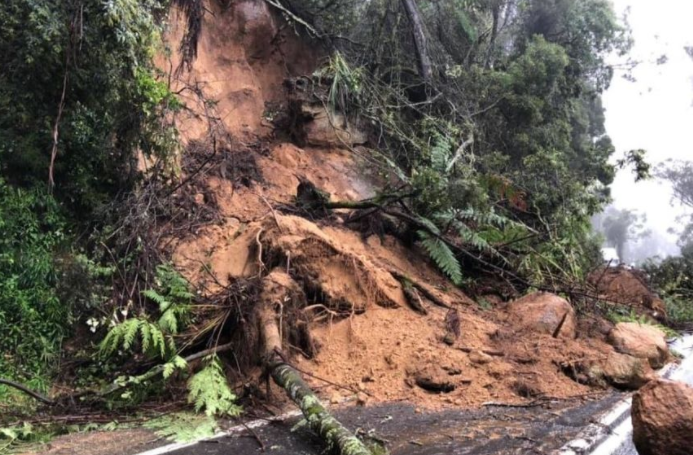 After a week of large hail, landslides, damaging winds and heavy rain, a reprieve from over a week of wild weather in NSW is in sight.

Wet, windy weather is persisting from Port Stephens on the mid-north coast to Batemans Bay on the south coast on Sunday.

In Sydney, the highest falls since 9am on Sunday were recorded in Little Bay in south-eastern Sydney and the northern beaches.

A strong marine wind warning is also current along the state’s coast from Coffs Harbour to the Victorian border.

Yesterday in Unanderra, the creek behind my place ran like I’ve never seen it before. Rapids would describe it. pic.twitter.com/m4qemse3rK

While the miserable weather hasn’t quite cleared out yet, the State Emergency Service says it’s a much quieter day than Saturday, when they received just under 400 calls for help and performed four flood rescues.

“It was a very busy day … the volunteers are still out there cleaning up outstanding jobs,” duty officer Neil Wiblin told AAP.

Most of their calls were from suburbs in Sydney’s south, which were pelted with hail, and areas on the state’s south coast where relentless downpours caused flash-flooding.

Massive rainfall totals were recorded across the state in the 24 hours to 9am on Sunday, with Moruya near Batemans Bay receiving 191mm.

The deluge has triggered minor flooding along the nearby Deua River at Wamban, which is expected to peak at 5.2m around 2pm on Sunday.

Further north, 109mm fell on Ulladulla in only three hours.

The miserable weather has wreaked havoc across the state all week, with flash-flooding and rock falls impacting roads and cutting power to thousands.

Heavy rain and gale-force winds continue to lash parts of Australia's east cost this morning after one of the country's most intense storm days of the season yesterday. #9Newshttps://t.co/7qPAtBJzDo

Saturday was no different, with the conditions leaving parts of Sydney’s northern beaches without power and causing a landslide on the Snowy Mountains Highway near Brown Mountain.

But Bureau of Meteorology forecaster Shuang Wang told AAP the state will get a three-day reprieve starting Monday.

“Tomorrow’s conditions will be totally different from yesterday’s,” she said.

“Monday, Tuesday and Wednesday will definitely be good conditions, but from late Wednesday onwards, some weather will happen in the far southeast of NSW.”

That weather system will move across the state on Thursday and Friday, bringing more showers and storms.

Storm-battered NSW readies for a sunny break in the weather