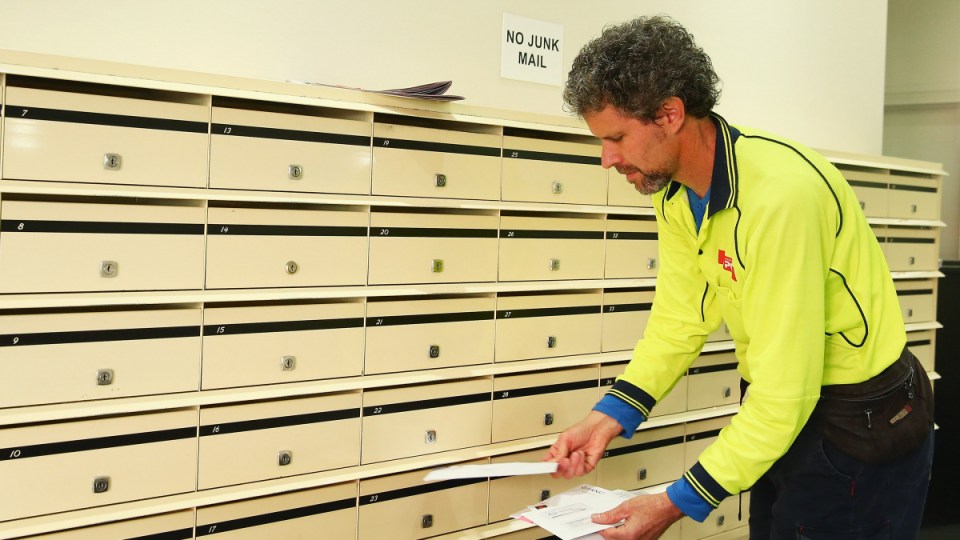 Australia Post workers have have struck a deal to guarantee jobs and pay ahead of cuts to letter delivery services. Photo: Getty

Australia Post workers have struck a deal to protect pay and jobs following claims one in four posties’ jobs were under threat from coronavirus-related letters service cuts.

The agreement comes just a day before a Senate inquiry into the changes which are due to come into effect next month.

The inquiry will examine the outfit’s “alternating delivery model”, and will hand down a report by August 11.

The model will see letter delivery in metro areas occur every second day with some posties redeployed to deliver and process parcels.

Australia Post boss Christine Holgate said the firm was “pleased to reach this agreement with the union to provide certainty to our workers as we navigate the effects of COVID-19 on our business”.

“No posties will be removed from the delivery service and we have been encouraged by the strong response from people wanting to move across to parcel delivery,” Ms Holgate said.

The union representing postal workers announced the “massive win” for postal workers on Tuesday, with Australia Post entering into agreements that will guarantee jobs and pay for workers.

“One in four delivery jobs will no longer be cut from the delivery model.
All posties employed at ADM sites will receive pay parity,” CEPU national president Shane Murphy and national secretary Greg Rayner said.

The job security for everybody affected by the impacts of the ADM … not just posties, is now guaranteed,” they said.

Australia Post employees covered by the Enterprise Bargaining Agreement will also receive a pandemic “thank you” payment next month, “with no strings or conditions attached,” Mr Murphy and Mr Rayner said.

“This outcome represents a massive shift from where we were eight weeks ago,” they said.

“Members were staring down the most significant attack on their jobs and take-home pay in recent history – changes which would have impacted on the jobs of thousands of postal workers, not just posties – but also those supporting the transportation, processing and sorting of mail product.”

Last month, The New Daily revealed Australia Post planned to slash dozens of jobs at its corporate headquarters, amid claims that one in four posties will lose their jobs due to a shift in business focus.

The New Daily understands those plans were paused following the article’s publication.

Both the Morrison government and Australia Post have forcefully denied claims by unions and Labor that the coronavirus-related service cuts would leave as many as 2000 posties out of work.

Last month, Australia Post publicly called on “all members of Parliament” to support the temporary service cuts, which it said are “essential” to “manage the impacts of COVID-19”.

On Tuesday, Labor hailed the deal as a “surrender by the Morrison government on the jobs and wages of Australia Post workers”.

However, “the fact remains mail delivery frequency to seven million Australian households is still being cut at a time when revenues are increasing,” they said.

“The real issue here has always been about how Australia Post can best serve Australians as parcel volumes have exploded during the pandemic, as well as offering posties the best possible prospects of continuing employment,” they said.

“This has been the government’s focus – in contrast to Labor which shamelessly politicised this issue before now abruptly changing its position, evidently on the instructions of its union masters.”

They were requested by Australia Post in March after the coronavirus hit letter volumes, and approved by the Morrison government in April.

The changes are set to be reviewed in June 2021, with Australia Post arguing that they will allow it to shift its focus to parcel deliveries following a surge in demand due to the pandemic.

However, the CEPU has cast doubt on whether the service changes will actually “improve the prospects of Australia Post meeting their claims to deliver a better parcel service”.

“The proof of that remains to be seen,” Mr Murphy and Mr Rayner said.

Experts have called for a national conversation over the publicly-owned firm’s future as it pivots from letters to parcels.

Australia Post was founded in 1809, and letters have been its mainstay for more than 200 years. But the rise of online shopping and digital communication has seen letter volumes decline and parcels surge in recent times.

“In the United States, for example, they have legislation in place where [the USPS] will focus on letters, not parcels, and leave other companies to do the powerful stuff,” Edith Cowan University supply chain and logistics expert Flávio Romero Macau said.

That has resulted in the national postal service “losing loads of money, and it’s up to everyone, the taxpayers, to pay that bill”, Dr Macau said.

“So we have to think about what we want Australia Post to do, whether we want it to be a sustainable business or not.”