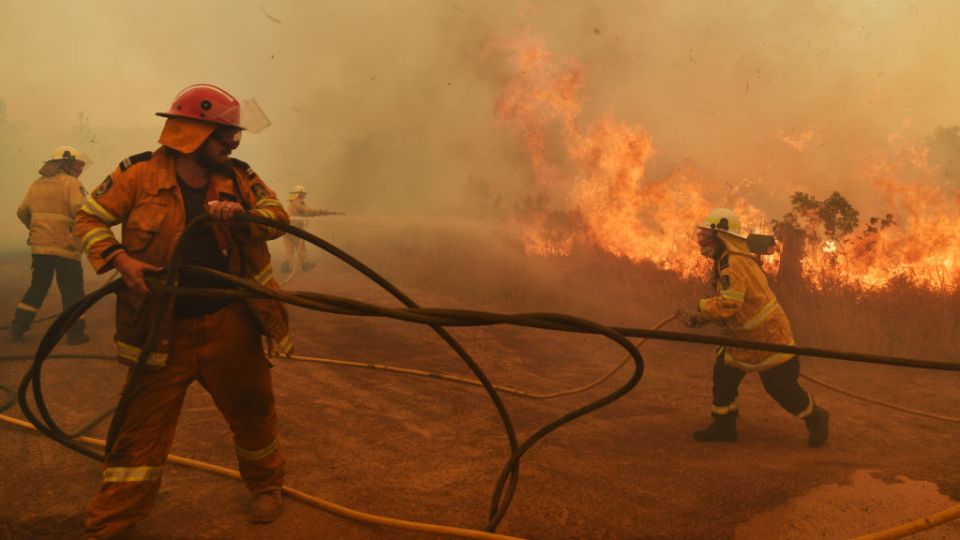 Retired fire chiefs are demanding action on the “urgent threat” of climate change as Australia contends with “a new age of unprecedented bushfire danger”.

With no end in sight to the worst bushfire season, exhausted firefighters who are “dead on their feet” spent Wednesday night battling dozens of blazes across Queensland and NSW.

While Thursday is expected to bring a slight reprieve in the weather, crews are bracing for another onslaught of horrific fire conditions on Friday and into the weekend.

As of 6.30am NSW time Thursday there were 61 bushfires still burning in NSW and 70 in Queensland.

With the bushfire emergency expected to continue over summer, a group of 23 fire and emergency leaders from every state and territory said scientists had been warning about this catastrophic scenario for decades.

The Emergency Leaders for Climate Action, which includes ex-fire chiefs from NSW, Queensland, Victoria and Tasmania, will gather in Sydney on Thursday.

The group has made a direct link between global warming and the fact that harder-to-control fires have broken out earlier than normal across NSW and Queensland.

They are also pressing for an urgent plan to phase out fossil fuels such as coal, oil, and gas, which they argue are “the root cause” of the problem, and will demand more support for emergency services and firefighters.

“Climate change is the key reason why fire seasons are lengthening, fires are harder to control, and access to international firefighting resources like large aircraft is becoming more difficult,” he said.

“The government must respond to this urgent threat with an urgent response.”

The issue has sparked a war of words between politicians, with the Morrison government insisting it is not the time to talk climate policy.

Scientists have also weighed into the debate which includes arguments over the frequency and quality of hazard reduction burns.

Ross Bradstock, a bushfire risk management expert at the University of Wollongong, said there was a shortening window in which hazard reduction burns could be undertaken, the ABC reports.

David Bowman, a professor of pyrogeography and fire science at the University of Tasmania, said it was disingenuous to blame ecological issues for preventing back burning.

He told the ABC fuel management had been impeded by factors like smoke pollution, ill health, resourcing, coordination, legal liability, cost and safety.

“The debate we are having is really the society sort of catching up with the internal trade-offs that fire managers had been thinking through about how they can manage fuel,” he said.

“You can’t just go into the landscape and start burning it.”

In return, the Greens labelled the deputy prime minister a “dangerous fool” who was putting lives at risk.

NSW Premier Gladys Berejiklian has described it as “inappropriate” to discuss the issue while fires continue to rage, but insisted her government has not shied away from the issue and is prepared to discuss it at a later stage.

Firefighters will make the most of a brief weather reprieve to strengthen containment lines as Queensland braces for worsening conditions.

More than 70 fires are burning across the state as firefighters work frantically to contain the risk, with the fire threat set to intensify on Friday.

Residents of two northern Queensland towns near Gympie and Bundaberg have been told to leave now as bushfires in the areas worsen.

The alerts were issued for Black Snake, in the Gympie region and Woodgate, south of Bundaberg early on Thursday morning.

While authorities keep a close eye on Woodgate and Black Snake on Thursday, firefighters will make the most of a brief respite in the weather to strengthen containment lines after 20 new fires were declared on Wednesday.

Moist coastal winds will deliver a short-lived relief on Thursday before westerly winds dominate conditions on Friday when the fire threat is expected to intensify.

The weather bureau warns the westerlies will push extremely dry air back towards the coastal fringe.

“We would expect to see the maximum temperature quickly return to four-to-eight degrees above the November average on Friday and into the weekend,” a spokeswoman said.

“When we combine that with the dry air, we expect to see elevated fire dangers once again as we head toward the weekend.”

On Wednesday, residents and holidaymakers had to pile onto boats to escape a large out of control bushfire whipped up by gusty winds on Queensland’s Sunshine Coast.

Firefighters and water-bombing aircraft battled the blaze that jumped containment lines at Noosa North Shore on the northern banks of the Noosa River.

A large fire is still burning in difficult terrain near the five-star Spicers Peak Lodge on the Southern Downs, but it is not directly impacting properties.

There are a number of fires between Brisbane and the New South Wales border, including in the Scenic Rim west of the Gold Coast, and a blaze in Cobraball near Yeppoon in central Queensland.

Firefighters ‘dead on their feet’

Firefighters and volunteers are battling exhaustion as they continue to combat devastating NSW blazes that have been raging for a week.

Volunteer firefighter Greg Walker has been tackling a Hillville fire – that has consumed 22,000 hectares and continues to burn – on and off since last Thursday.

They’re dead on their feet, he told AAP, with the team often using their breaks to do what they can to save their own homes.

They know firsthand just what this fire can do.

“I always thought I’d defend my home, but I’ve seen what this fire is doing,” he said.

“I’d be out of here, my kids need me … a defendable home isn’t really defendable at the moment.”

As he drives towards the towering flames, Mr Walker says he’s felt anxious and nervous, but he also says there’s an even worse feeling on the fireground.

“The worst feeling is telling people you can’t defend their place because there’s not enough of us here and you just get out,” he says.

“And then when you do lose a place you have to just move onto the next one.”