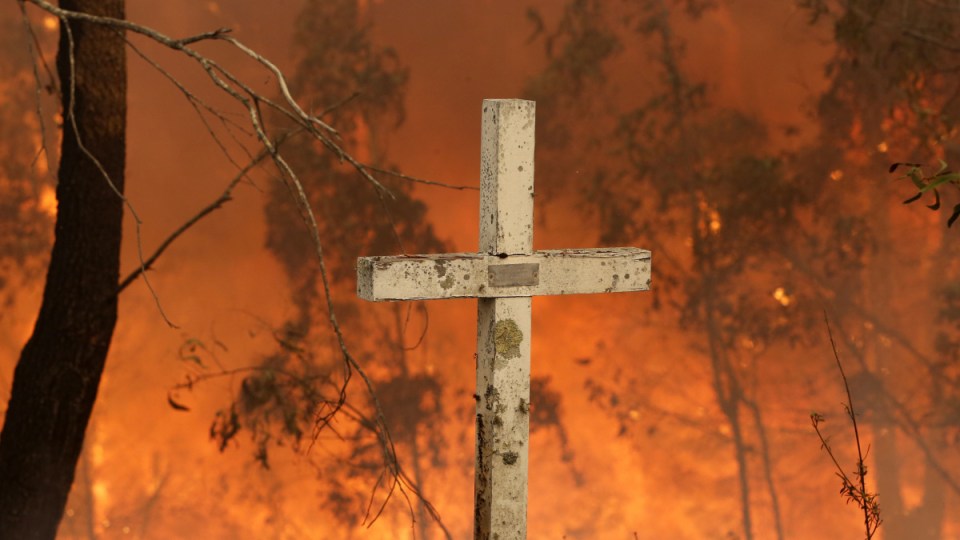 First came the drought, then fire – and now the denials that a warming world has anything to do with bigger, more frequent blazes. Photo: AAP

So The New Daily promises not to talk about the controversial “c” words in the below round-up of the issues surrounding the deadly bushfires raging across Australia.

But if the people impacted by the fires want it discussed, and the people whose actual day jobs and life’s work it is to research the topic, want it on top of the agenda, we’re not going to sugar-coat their words.

Below is just information. About what’s happening, who’s saying what – and some history about fire patterns that have led educated and experienced scientists to warn about that thing that-shall-not-be-named.

Also known as: the facts.

Not the first, won’t be the last

Bushfires have always been part of the Australian landscape and our native plants have adapted to withstand fire.

Some of the most disastrous fires, in terms of lives lost, include two in recent memory – in communities still picking up the pieces: Black Saturday in 2009 in Victoria, and Ash Wednesday in 1983 in Victoria and South Australia.

A flick through the archives reveals plenty more examples of deadly blazes, the standouts being: In 1967 in Tasmania, 62 people were killed in the fires known as Black Tuesday and thousands were left homeless. On Black Friday in Victoria in 1939, 71 people died. And all the way back to 1926, Gippsland in Victoria suffered weeks of fires that killed a total of 60 people.

Much earlier than that, the 1857 Black Tuesday fire incinerated one-third of Victoria and virtually wiped out sheep and livestock in the state.

In other words, fires Down Under are nothing new.

It’s an argument used by science deniers to shutdown conversation about evidence and warnings of looming disasters.

“We’ve had fires in Australia since time began, and what people need now is sympathy, understanding, help and shelter,” Deputy Prime Minister Michael McCormack said on radio this week.

“They don’t need the ravings of some pure, enlightened and woke capital city greenies at this time.”

Can’t tell you how disappointing it is to see you endorsing more mines in our region while our country is on fire. #auspol #ClimateEmergency #ClimateCrisis

Others preferring to avoid the “c” words shared old newspaper clippings of bushfires from the 1800s and 1900s in response to warnings from authorities that “catastrophic” conditions lay ahead and calls from 11,000 scientists to declare a worldwide emergency-threat level.

If you had followed the chain of command – instead of your South Australian aristocrat sense of entitlement – and reported your meeting with Pappadopoulos to the department and minister would you be running from #qanon? Hypotheticals are fun. https://t.co/jkRplGUdev

Scientists contacted by The New Daily wanted to remind readers that, of course, they agreed there have always been fires in Australia. But they also stressed that fire seasons are becoming longer. And the ferocity of fires is increasing.

They made it clear more people would be under threat, and that blazes would not be isolated to remote, bushy areas. Look at the recent suburban California fires as an example. Or the fact Sydney suburbs had to be doused in fire retardant on Tuesday.

Former NSW fire chief Greg Mullins put it like this:

“If anyone tells you, ‘This is part of a normal cycle’ or ‘We’ve had fires like this before’, smile politely and walk away, because they don’t know what they’re talking about.”

What about the argument for planned burns?

“You can go blue in the face” saying there should have been more planned burns, said La Trobe University fire ecologist Professor Mike Clarke.

But, he said, it’s just not that simple – and it’s time to talk about the “elephant in the room”.

“The fire season has got longer and the window to do planned burns has got smaller,” Professor Clarke said.

In other words, there have been fewer ‘safe’ days for authorities to light fires to get rid of bush that could fuel a bushfire.

Climate change is not only making conditions hotter and drier, it's also decreasing the number of days it's possible to do fuel reduction. Listen to the science and the experts, not the furphies. @Barnaby_Joyce @CharisChang2 @MaxKoslowski @dlmcculloch @emritchiejourno #NSWfires pic.twitter.com/W8MtlDWRjO

Mr Mullins, a member of the Climate Council with Tim Flannery, agrees, saying “warmer, drier conditions with higher fire danger are preventing agencies from conducting as much hazard reduction burning – it is often either too wet, or too dry and windy to burn safely.”

He added: “Blaming ‘greenies’ for stopping these important measures is a familiar, populist, but basically untrue claim.”

The number of park rangers – who conduct hazard reduction burns – has emerged as another issue, with The Australian reporting that NSW  national parks staff have been cut by a third since the Coalition came to power in 2011.

Even if targets were met, Professor Clarke said, no amount of fuel reduction can fully prevent a fire taking off on code red day. In this week’s fires, embers have been carried by the wind many kilometres ahead of the fire front.

“My suspicion is the general public has an overly optimistic view of how much safer [they are made by planned burns],” he said.

“My fear is a greater false sense of security.”

What if it were the other ‘c’ word?

Last week, an unprecedented thing happened in the world of academia: 11,000 scientists signed a paper declaring the world was facing an emergency-level threat.

The overwhelming feeling among scientists this week is: ‘Why are we still not being believed?’

If it were something like cancer, they said, a doctor’s diagnosis would be accepted. And there would be no hesitation to talk about preventative action or plans for avoiding the cancer spread in future.

“It’s like looking at a scan for cancer in your body and saying ‘Oh I don’t wish to look at that’,” Professor Clarke said.

So I guess it would be inappropriate to talk about vaccination during a measles epidemic.

Is this the new political correctness? https://t.co/IVnlNfKVWI

So, if our politicians think ‘politicising’ climate change as fires rage is wrong, they must have been outraged when John Howard & the late, great Tim Fisher ‘politicised’ gun control after Port Arthur. I, on the other hand, think they saved many thousands of lives…

Out of the mouths of those caught up in the flames

“Shame on you. Your house is not burning. My house is burning down. What are you doing? Nothing…You’re playing with fire,” – resident Ginger O’Brien yelled at Labor leader Anthony Albanese on Tuesday.

“In this bucket is my house,” Aaron Crowe said, dumping a bucket of soot on the steps of NSW Parliament on Tuesday.

“When is the time to talk about climate change then, if I’m standing in the wreckage of my own house?

“We had ample time to prepare and they’re talking about hopes and dreams, thoughts and prayers, miracles and heroes – it’s not realistic.

Carol Duncan’s father lost his home in a recent fire. She said: “I’m disturbed that our government has ignored – and continues to ignore – the repeated calls for genuine climate action from our community, and from the scientists who have warned us that climate change will make bushfires and other natural disasters happen more frequently and become more intense…

This is my father’s home being destroyed by #NSWfires a few weeks ago – just one of 64 in this fire alone. Two of his friends were killed. My brother and his wife have today had to evacuate their home. I think now is a very good time to talk about #climatechange. pic.twitter.com/b5Xw4kYNnE

Glen Innes Severn Council’s mayor, Carol Sparks, who lost her home, said: “There is no doubt about it, we are suffering from the effects of climate change and global warming.”

We’ll let these experts have the last word

I believe it is now timely and appropriate for a discussion of the linkage between climate change and bushfire to occur, noting we need to acknowledge uncertainties and complexities.  As a society we are running out of time to adapt to climate change driven bushfires, and policy failure will lead to escalating disasters.‘‘

Climate projections estimate an increased frequency in severe bushfire weather in the future and a lengthening of fire seasons which inevitably will put pressure on bushfire fighting resources and communities.’’

Society’s leaders have a responsibility to lead. Every decision not to act in the face of a clear climate change emergency condemns their fellow citizens to increased danger…Politicians with the most blood on their hands are those that deny or downplay the links…or that delay discussion of climate-caused disasters.’’

We need to start preparing now for these future risks, and not just the coming months, but the coming years and decades – we cannot keep doing things the same. …Yes, climate change is causing more severe weather, but demographic changes are having an equal impact and deserve just as much of our attention.’’

So is it climate change?  Jury’s always out when it comes to science, as it should be, but I’d lay bets that it is climate change affecting our seasons.  And this is scary for everybody.  We need to sensibly, gently (but rapidly) adjust our ways of doing economics and politics worldwide.’’

The devastating bushfires in NSW and Queensland are unprecedented … However, the fire situation is consistent with our new world of bushfire threat associated with climate change. Residents have previously not had to contend with such intense fires threatening so many locations.’’