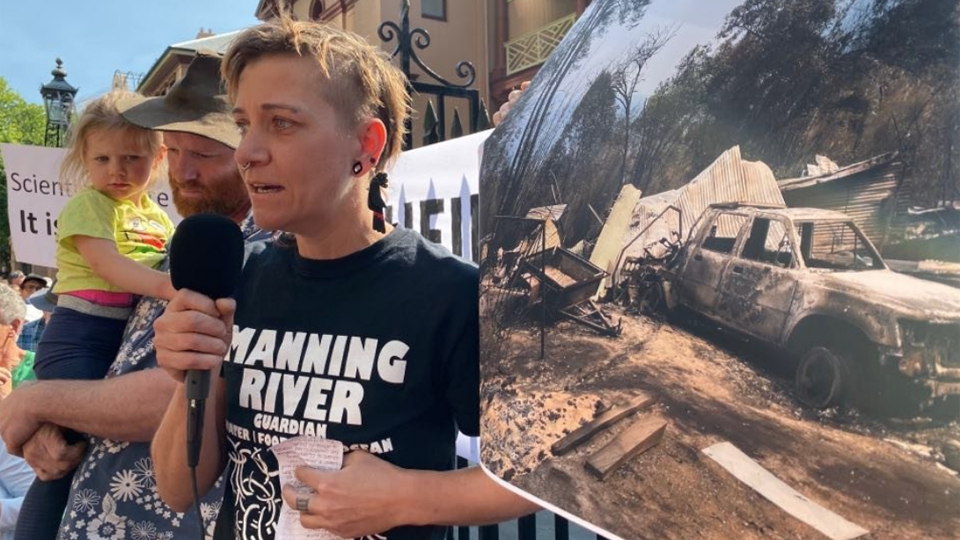 Moments after tipping the burnt remains of his family home onto the footpath outside NSW Parliament, Aaron Crowe declared now was precisely the right time to talk about climate change.

The 38-year-old lost his two-bedroom home – which he shared with his wife and three-year-old daughter – on Friday after a fire tore through the tiny community of Warrawillah on the state’s mid-north coast.

Mr Crowe, wife Fiona Lee and daughter Peppa travelled to Sydney on Tuesday for a rally outside the NSW parliament demanding more resources for the the state’s Rural Fire Service and to protest a bill relating to mining approvals and greenhouse gas emissions.

Critics say the bill, which is likely to be debated this week, curtails the power of planning authorities to consider climate pollution regarding new coal and gas projects.

Standing among hundreds of protesters on Sydney’s Macquarie Street, Mr Crowe held up an old compost bucket from his home – which he had built himself – and tipped the charred remnants onto the footpath.

“In this bucket is my house,” Mr Crowe told the crowd.

NSW Premier Gladys Berejiklian has hit back at questions linking fires raging around the state to climate change, insisting now was not the time to discuss the issue – a sentiment Mr Crowe dismissed.

“When’s the time to talk about climate change then, if I’m standing in the wreckage of my own house?” he said.

“We had ample time to prepare and they’re talking about hopes and dreams, thoughts and prayers, miracles and heroes – it’s not realistic.”

In that tin are the ashes from Fiona and Aaron's home. Gut-wrenching. We stand in solidarity with everyone impacted by this tragedy. Please donate generously to the bushfire appeals. #bushfires #climatecrisis pic.twitter.com/RZcdi0IqJJ

Some 52 fires continue to burn across NSW on Tuesday with 26 uncontained and 13 at “watch and act” level.

Three people have died, 100 – including 20 firefighters – have been injured and at least 150 homes have been destroyed, and that figure is expected to rise.

Two more people died in a fire at Rappville, in northern NSW, in October.

A catastrophic fire danger rating was in place for the greater Sydney, greater Hunter and Illawarra-Shoalhaven regions on Tuesday.

“This is not about unicorns and fairies, this is about people’s lives, it’s only gonna get worse – they want to wind back climate policy now when people are dying from climate change,” Mr Crowe told protesters.

Ms Lee’s hands shook as she stood in front of a photo of what was left of her home and addressed the crowd.

“This bill simply provides procedural certainty about how extraterritorial impacts can be dealt with in the conditioning of NSW planning approvals,” he said.

‘This is about people’s lives’: Fire victims demand climate action