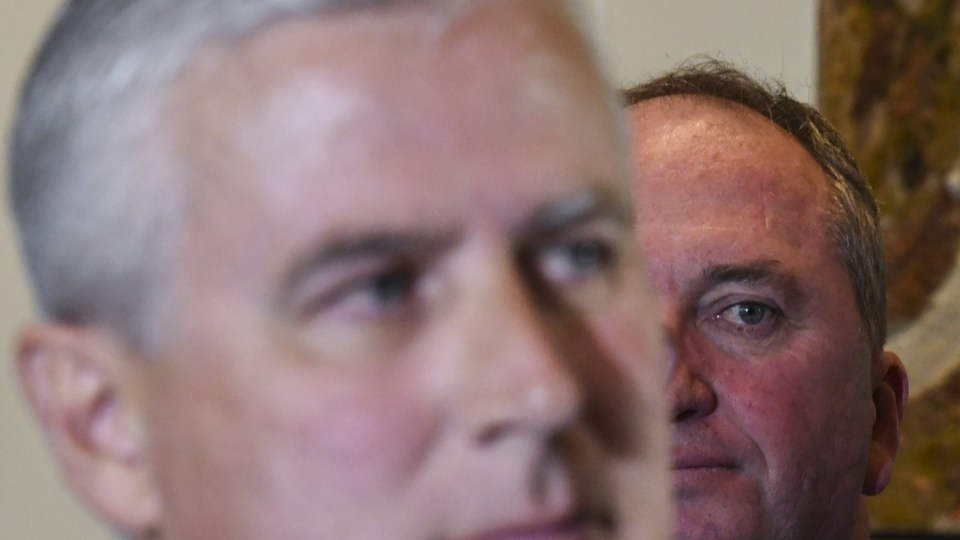 Barnaby Joyce hasn't given up the fight to be captain. And Michael McCormark is collateral damage. Photo: AAP

It’s hard to think of anything more politically off-putting than politicians behaving like self-entitled brats. Not only does self-indulgent behaviour give politics a bad name, it leaves voters with a poor impression of the parties these bratty politicians belong to.

So it might be hard to fathom why some Nationals MPs have been behaving badly in recent weeks, given their claimed concern about losing the support of voters.

Not surprisingly, there is more to this drama than first meets the eye. There’s another agenda at play here, being manipulated by the Nationals self-appointed leader-in-exile Barnaby Joyce.

The Nats’ recent self-indulgent behaviour has included a litany of whines about the government’s drought response, self-promoting leaks of an expletive-ridden rant about coal to the PM, and none-too-subtle leadership rumblings.

The former is a shift from the Nationals initially making a big deal of their ability to persuade Prime Minister Scott Morrison to make drought the nation’s first priority. They insisted the PM make numerous visits to drought-affected areas to inspect the dust and announce even more cash would be poured into unviable farms.

Team @The_Nationals – the nation’s dam builders! We are constructing water infrastructure because we see the need to deliver water storage to benefit local communities. We are getting on with the job to secure the precious resource that water is for rural and regional Australia. pic.twitter.com/hTgfTdSYuq

However, some Nats then got the irrits when the PM gazumped ‘their’ drought strategy announcement this week, by making one of his own drought announcements during a radio interview that happened to occur at the very same time.

This suggests the PM’s help (and cash) is only welcome when it props up the Nationals, who seem to have forgotten that drought-stricken families couldn’t care less who gets the glory as long as the payments arrive quickly.

The same lack of self-awareness was evident in the Nationals’ reported indignation that One Nation leader Pauline Hanson was able to lay claim to delivering a Senate inquiry into the dairy industry and also convince the agriculture minister, who happens to be the Nationals’ deputy leader Bridget McKenzie, to fast-track an industry code of conduct.

This made Senator McKenzie a lightning rod for Nationals’ discontent. She had reportedly told colleagues the code of conduct could not be delivered quicker, but then seemingly did so for Ms Hanson, who was threatening to boycott votes on government legislation until something was done for the dairy farmers.

Now Nationals MPs have complained about how shoddy the code is, without recognising this is probably a direct result of the policy being rushed to completion. And again, the Nats seemed more concerned with who gets the credit for an initiative rather than the farmers who will benefit.

Survival is the real number one priority for Nationals MPs – of their jobs and, by extension, their party – not the drought, as they’d like voters to think. Their calls for more drought money, more dams, and, ironically, more coal-fired power stations, is a desperate attempt to lock in votes, not solve the actual challenges faced by voters.

If the latter was the Nationals’ real priority, its MPs would welcome a drought funding announcement or dairy code of conduct, whoever it came from.

It would be fair to say the Nationals MP seemingly most obsessed with political survival is Barnaby Joyce. Having made it clear he can barely get by on a backbencher’s salary, the disgraced former leader has made no secret of his desire to return to the top job. However, he just can’t rally enough votes in the Nationals party room to get there.

Plan B appears to involve replacing the deputy Bridget McKenzie with one of his protegees, either David Littleproud or Matt Canavan.

A well-coordinated whispering campaign to the media over the past few weeks has foreshadowed that Nationals leader Michael McCormack is ‘safe’ (translation: Mr Joyce cannot muster enough votes to topple him).

However, according to the well-briefed journalists, Ms McKenzie’s position is on the line (translation: while Nats MPs might not support Mr Joyce for leader, they might be more inclined to support one of the young guns, Mr Littleproud or Mr Canavan).

It’s also no coincidence that a Nationals’ backbench committee, which includes Mr Joyce, leaked an unapproved drought policy to the media last week in an effort to score brownie points with rural voters and put pressure on Nationals cabinet ministers (which include Ms McKenzie) to exert greater influence on the government’s drought strategy.

If Mr Joyce is successful in coaching either of his apprentices into the Nationals deputy leadership, he will likely try to re-exert influence on government policy by proxy.

This will be the first step in the renaissance of Mr Joyce, which could see one of his padawans eventually rise to the Nationals leadership, making it possible for him to retake his ‘rightful’ place as a Nationals Cabinet minister.

In short, the turmoil currently wracking the Nationals is due to one man’s sense of entitlement feeding on the ambition and self-indulgence of others.

The sooner Nationals MPs realise their future should not include Mr Joyce, the better. Otherwise they deserve their worst fear, to be abandoned by voters, to be swiftly realised.