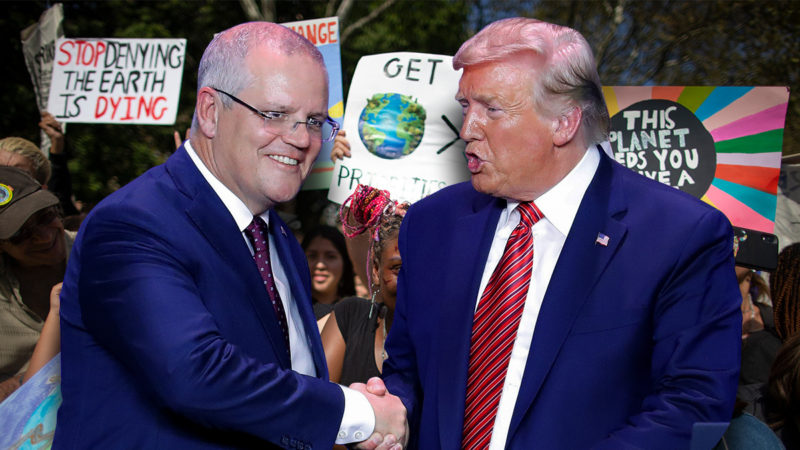 US President Donald Trump abandons the Kurds to Recep Tayyip Erdogan’s Turkey and Scott Morrison is fine with that.

Trump rants at the United Nations about patriots before globalists and Scott Morrison echoes that.

And there was no need for the Australian Prime Minister to do any of the above.

These were not cases of not wanting to offend the febrile American president.

Each has been an unnecessary endorsement of Mad King Donald, the stuff of Rupert Murdoch’s Fox News commentators.

Even some hitherto-unshakeable Republican Party Trump supporters have dared to go public to criticise their president’s tweeted Middle East mayhem and cop the inevitable Trump retaliation and threats.

The US military is horrified by its Commander in Chief.

But the Australian Prime Minister only says Trump is being consistent with his intention outlined a year ago to withdraw troops from Syria, Afghanistan and Iraq.

Trump a year ago also said the Kurds were great people.

Just look at this lying POS. One year later he has completely abandoned our allies, the Kurds. https://t.co/KqC649c4yr

So much for whatever Trump says from one tweet to the next.

As for Mr Morrison repeating Trump’s attack on China’s “developing nation” trade status, there was no upside in it for Australia, only downside in adding to the tension with our most important partner.

It is a fight Trump chooses to have and of stuff-all relevance to us.

Indeed, Australia needlessly joined an ignorant argument. The myth that China gains great advantage from claiming “developing nation” status has been busted on The Conversation.

When international lawyers look at the reality of China’s status: “What’s at stake? In practical terms, almost nothing. Trump and Morrison are demanding something that would give them little.”

But don’t let facts get in the way of going all the way with Donald J.

“The future does not belong to globalists, the future belongs to patriots,” Trump declared in his speech to the UN on September 24.

A week later, the Australian PM was decrying “elites”, “negative globalism that coercively seeks to impose a mandate from an often ill-defined borderless global community” and “unaccountable internationalist bureaucracy”.

As a middle-order trading nation, Australia has been made rich by surfing the wave of globalisation.

It has much more to gain than most from an international rules-based order.

Without quite saying it, Morrison was seen to be taking a pre-emptive swipe at global pressure for action on climate change.

This is the Scott Morrison who brings a lump of coal into Parliament, tries to mislead the UN on Australia’s climate record and trots out very Trumpy “fake news” lines: “Criticisms that have been made about Australia are completely false and they’re completely misleading and people have had a prejudiced view. Where do they get their information from? Maybe they read it.”

The Prime Minister has his internal party politics to play in pushing coal and running with expensive failed and failing Abbott-era carbon policy.

In playing “Trump-lite”, Morrison has the approval of no less a neoliberal lobbyist than the Institute of Public Affairs policy director Gideon Rozner: “He is following the @realDonaldTrump playbook: Engage the base, deliver for the middle and ignore the bleating of people who will never, ever vote for you.”

Reactions like this show that @ScottMorrisonMP is on the right track. He is following the @realDonaldTrump playbook: Engage the base, deliver for the middle and ignore the bleating of people who will never, ever vote for you. https://t.co/8wnWAompH4

(Only someone primarily dedicated to the interests of IPA donors in the top 0.01 per cent or so would claim Trump is delivering for the middle – his policies overwhelmingly benefitting the very wealthy in a country where the richest 400 billionaires now enjoy a lower effective tax rate than the working class. But that’s another story.)

Copying successful populist politics is one thing. Going the extra, unnecessary mile for Trump is another. It is reasonable to wonder why, particularly when it appears to be against Australia’s best interests.

It seems Scott Morrison genuinely likes, respects and hankers after Donald Trump – he’s not just cosying up to an American president in Australia’s strategic interests.

Which in its turn raises the question, why?

Among the minority of Australians who trust Trump – a smaller minority than trust Xi Jinping – there seem to be four sometimes-overlapping classifications.

Gina Rinehart, Anthony Pratt, the Murdochs – naked self-interest is not the most endearing of character traits, but is understandable.

Then there are the devoted haters of any and all things “Left” and/or Obama and Clinton. For them, as long as the Left doesn’t like it, it is great and unmatched wisdom.

Trump’s devotion to undoing Obama’s legacy, even when it’s as dangerous and stupid as ditching the Iran nuclear agreement, is fine by them.

There are the casual ratbags who admire Trump “shaking things up” without caring about the consequences. He’s colourful, he’s outrageous, he’s entertainment, he’s not like any other president, it’s fun to watch from afar.

And there are the evangelicals.

I don’t think Scott Morrison fits any of the first three categories.

He is a proud and active evangelical, wearing his particular brand of religion on his sleeve and in office. The evangelicals in turn strongly support the coalition.

There are multiple Ph D theses to be written about why white evangelicals are hard core Trump supporters, given his personal values, “he of the three wives and multiple affairs, and a tendency to engage in exceedingly un-Christian-like behaviour at the slightest provocation “.

The books are already tumbling out with various theories. More than 81 per cent of white evangelicals voted for Trump and 73 per cent continue to support him.

Among the theories is racism among white American evangelicals. Being seen as anti-Muslim goes down well.

American racism would seem a strange reason for Australian evangelicals to climb aboard, though the anti-Muslim sentiment might not bridle.

Scott Morrison strongly denies stories that he suggested capitalising on anti-Muslim sentiment at a 2010 Cabinet meeting. Some at that meeting have pulled up well short of backing his denial and the stories’ original authors stand by them.

More comprehensible is the American flavour of the most obvious Australian evangelicals, the prosperity theology, the tele-preacher style, the certitude of their correctness and divine destiny.

At the extreme, it would be more worrying if there was appeal in the idea of some Americans that Trump is hastening the Rapture – Armageddon.

It would help explain the mystery of Mr Morrison wanting his Hillsong Church mentor, Brian Houston, to accompany him to the White House – something so strange or embarrassing to the PM that he refuses to discuss it.  It’s “gossip”, up there with “on water”, “Canberra bubble” and “family privacy”.

There’s the mystery of a QAnon conspiracy proponent being a family friend.

It starts looking more than a little strange – like the Australian PM going much further than he needs to or arguably should with Donald Trump.

It looks like Scott Morrison is a true believer in Donald Trump. Unless you’re one of those four aforementioned types, that is very strange indeed.

Is our PM Scott Morrison Trump-lite or a Trump true believer?