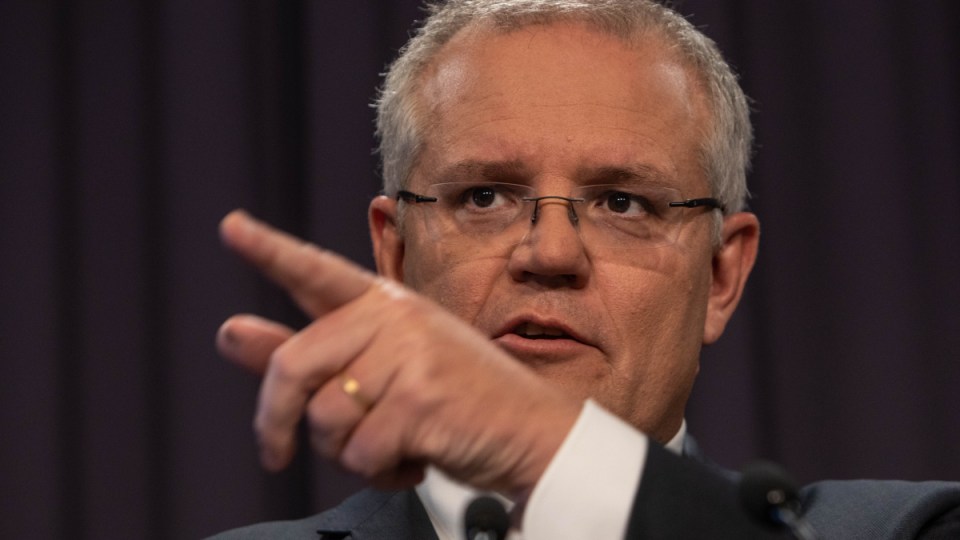 Mr Morrison has hit back at suggestions he wanted to exploit anti-Muslim sentiment in the community. Photo: AAP

Scott Morrison has cancelled a planned appearance on The Project after host Waleed Aly aired “a disgraceful smear” that he once discussed capitalising on anti-Muslim sentiment in a 2010 shadow cabinet meeting.

After terminating a press conference on Wednesday when he was asked about the claims, first published in 2011, Channel Ten revealed the Prime Minister’s office had pulled him from the schedule after a viral editorial relating to the New Zealand mosque massacre by broadcaster Aly.

That video has now been viewed more than 12 million times.

The New Daily first reported on Monday the Prime Minister’s office had called The Project after the broadcast on Friday night and threatened to sue.

The Project’s Hamish Macdonald on Wednesday night confirmed the “furious” call live on air during the program.

“On Friday night, in the wake of the most horrific events in Christchurch, our colleague [Waleed Aly] referenced that report in a powerful, personal reflection on what had just occurred,” Mr Macdonald said.

“And another fact, later that night the Prime Minister’s office, in a furious exchange, said Aly’s comments were defamatory.

“Now, we offered Mr Morrison the opportunity to respond, live on this desk, when he was due to appear on this program on Monday.

“Not only did he decline, but his media team pulled him out of the scheduled media appearance altogether.”

Government sources insisted on Wednesday night the planned interview was never locked in.

Mr Macdonald said The Project’s offer to give the Prime Minister an on-air right-of-reply remained open.

He also revealed New Zealand’s Prime Minister Jacinda Ardern’s response was to offer Aly a sit-down interview about the tragedy.

"The PM says he wants the truth. Well, here are some facts." – @hamishnews responds to the PM. #TheProjectTV

*Correction: The first report was in 2011, the Shadow Cabinet meeting was in 2010. pic.twitter.com/r49JRKApK4

Earlier, Mr Morrison had shut down questions about whether he ever sought to capitalise on “anti-Muslim sentiment” in a shadow cabinet meeting, describing the claim as a “repugnant lie”.

Mr Morrison said when questioned by The New Daily on Wednesday: “I’m going to stop you there. It is a repugnant lie, 100 per cent, and my working record with the Muslim community, in particular, speaks volumes.”

“Any suggestion to the contrary, I find utterly offensive.”

Three current and former cabinet ministers – Greg Hunt, Peter Dutton, and David Johnston told The New Daily on Sunday they backed Mr Morrison’s recollections that he never made the comments.

The public denial of private discussions within the shadow cabinet by multiple ministers is highly unusual and underlines deep concerns within the party the Coalition is vulnerable to political attacks on the claims.

However, it has emerged that Mr Hunt did not attend the relevant meeting, calling into question his recollections.

On Monday, Mr Hunt told The New Daily Mr Morrison did not make the comments.

But Mr Hunt was not actually there, telling ABC radio at the time: “Unfortunately I wasn’t at the meeting. But I know Scott [Morrisoson], and his style is deep compassion. He is deeply compassionate.”

Mr Morrison also confirmed on Wednesday he would not sue TV network Ten.

Allegations of that possibility arose after his chief press secretary Andrew Carswell warned The Project that Aly’s words were “defamatory”.

“I have no intention of doing that. I just simply want people to report the truth and that is an ugly and disgusting lie. I reject it absolutely,” he said.

“Over the last decade I have spent my time as a public figure working with the Muslim community in south-western New South Wales. I have walked the Kokoda Track with my Muslim brothers and sisters, I’ve done it on the Sandakan Death March. I have done it on the Salamaua Track in Papua New Guinea and organised, together with my good friend Jason Clare, similar visits to Turkey for the centenary of Anzac.

“That’s why I’m welcomed when I attend mosques in south-western Sydney, with warm embraces. Perhaps if people focused a bit more on the story they don’t want to tell about my relationship with people of all faiths in this community, then perhaps they wouldn’t leap to make prejudiced conclusions.”

“You’ll have to forgive me, these won’t be my best words…”

On this heartbreaking day, Waleed reflects and calls for unity. #TheProjectTV pic.twitter.com/mIOI0eGamb