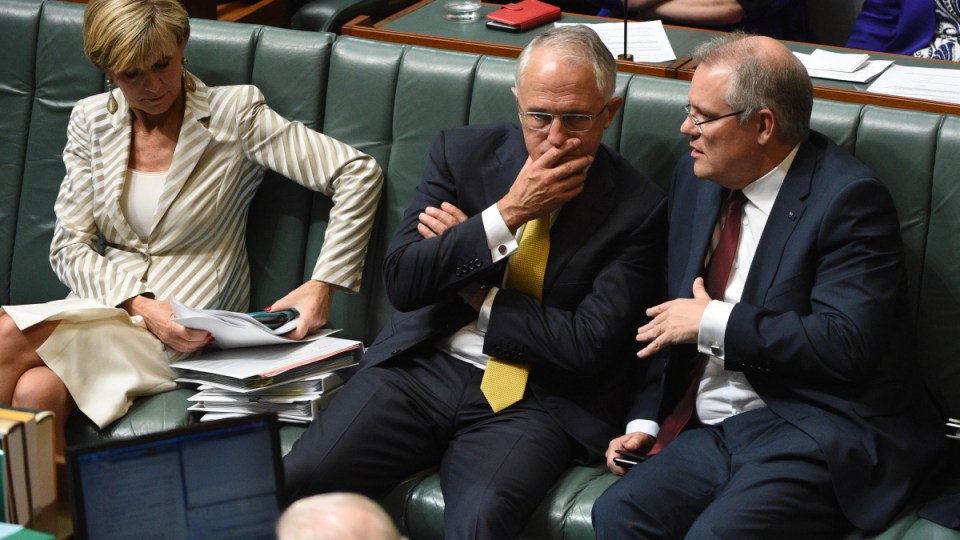 In her first public comments on the issue, the former foreign minister said she did not intend to discuss it, despite the Prime Minister’s claim it is “a disgraceful smear and an appalling lie”.

“I have always believed in cabinet confidentiality, whether it was in shadow cabinet or cabinet in government,” she said.

“I didn’t comment on the reports at the time and I don’t intend to comment at this stage because I still believe in cabinet confidentiality.”

Ms Bishop was then asked: “Do you back Mr Morrison’s account though?”

She declined to do so, repeating: “I am not going to enter into a discussion about what went on in a shadow cabinet meeting. I didn’t comment on it at the time and I don’t intend to comment on it now.” 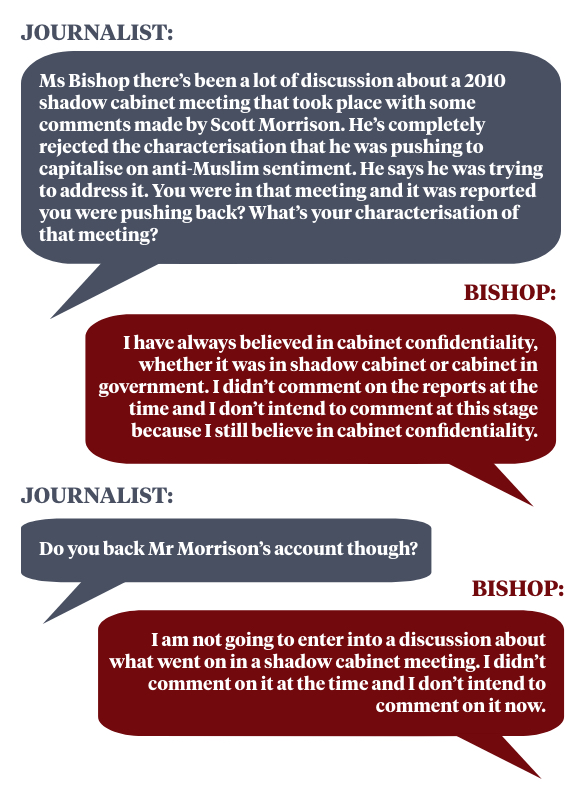 A spokesman for Mr Turnbull told The New Daily on Tuesday he had “no comment”.

Last week, Mr Morrison blamed two “unnamed sources” in shadow cabinet – Liberal MPs – for twisting the truth of the meeting into “a lie”.

The New Daily does not suggest that Ms Bishop or Mr Turnbull are those unnamed sources, only that they did not wish to endorse Mr Morrison’s account on the grounds of cabinet confidentiality.

Ms Bishop is the first former Liberal frontbencher who was in the room during the discussion to publicly decline to endorse Mr Morrison’s view that he never sought to capitalise on anti-Muslim sentiment.

In contrast, Peter Dutton, Tony Abbott, Greg Hunt and former defence minister David Johnston have now all broken cabinet confidentiality to back the Prime Minister’s account. It later emerged Mr Hunt was not at the meeting in question.

When the shadow cabinet leak was first published in 2011, Liberal frontbenchers said it was Ms Bishop, Mr Turnbull and Philip Ruddock who pushed back against Mr Morrison, warning Australia had a non-discriminatory immigration policy.

The meeting occurred in December 2010 but the leak came in 2011, with a report in The Sydney Morning Herald quoting Liberal frontbenchers accusing Mr Morrison.

Mr Ruddock told The New Daily last week that he does not recall the exchange but does not believe that Mr Morrison would seek to exploit anti-Muslim sentiment.

Mr Morrison confirmed last week that he did raise concerns over voters’ “anti-Muslim” sentiment during a 2010 shadow cabinet meeting. He insisted that was only to “address them, not exploit them”.

It was the first time the PM had admitted the discussions on “anti-Muslim” sentiments occurred, after describing claims he had sought to capitalise on the fears as an “ugly and disgusting lie”.

“What is suggested is that I said that we should exploit – exploit – concerns about Islam in the community to our political advantage,” Mr Morrison said.

“I was the shadow immigration minister at the time. And I was very concerned about these issues and the way people were feeling in the community.

“I was acknowledging that there were these fears in the community and we had to address them, not exploit them.

“I want to rule a line under this issue. It never happened.”

Bishop, Turnbull refuse to back Morrison’s recall on ‘anti-Muslim’ claims