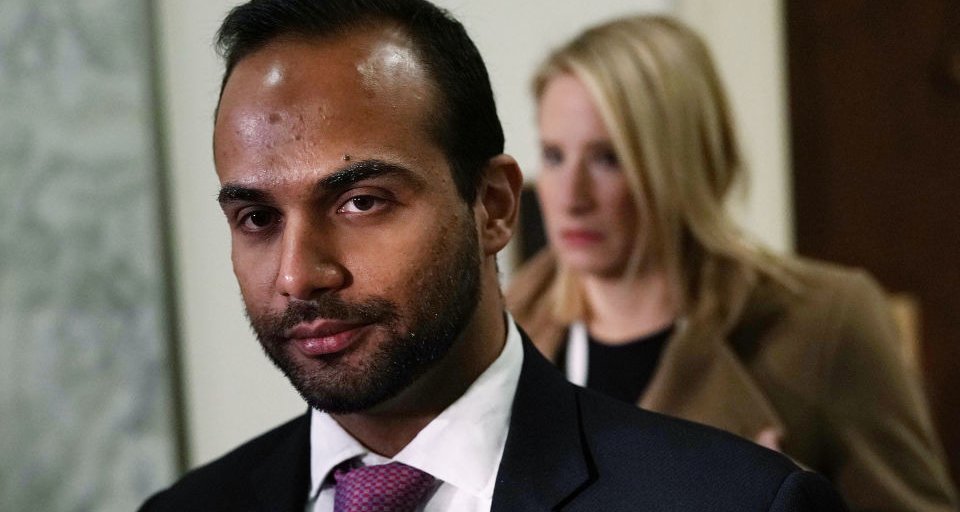 George Papadopoulos says it is ‘payback time’ over the Russia probe. Photo: Getty

Convicted felon and former Trump adviser George Papadopoulos has praised Prime Minister Scott Morrison for his co-operation with the Russia probe, insisting that Alexander Downer was “spying” on him and it was “payback time”.

In an interview with The New Daily, Mr Papadopoulos described his evening with Mr Downer, which sparked the investigation into Russian intervention in the 2016 US elections, as “the most bizarre meeting of my life”.

But he has praised Prime Minister Scott Morrison for co-operating with the probe that the US President Donald Trump hopes will discredit claims of Russian interference as “a witch-hunt”.

“My message to Scott Morrison is he is doing the right thing putting the relationship between the US and Australia above the personal interests of a Clinton ally who I reported to authorities for suspicion of spying on me,” Mr Papadopoulos told The New Daily.

“Good work and let the relationship heal, and become more resilient and stronger than ever before. My book covers the whole thing. Transcripts exist. He recorded the meeting.

Mr Downer denies recording the discussion and Australian officials have dismissed the claim as fanciful, but it is known that Mr Downer sent a cable back to Australia detailing his alarming conversation that suggested the Russians had “dirt” on the US Democrats presidential candidate Hillary Clinton.

Last year, Mr Papadopoulos pleaded guilty to making false statements to FBI agents about the timing and the possible significance of his contacts in 2016 relating to US-Russia relations and the Donald Trump presidential campaign. He served 12 days in federal prison.

The saga over Australia’s involvement in the probe into Russian interference begins in London’s Kensington Wine Rooms in May 2016.

In his memoir Deep State Target, Mr Papadopoulos devotes an entire chapter to Mr Downer titled ‘The Devil from Down Under’.

He also accused Mr Downer of claiming the US president Barack Obama was “an uppity, arrogant guy … a comment I sense carries racial undertones”.

“I’m stunned by this senior diplomat’s bullying manner. I’ve had warmer greetings from ex-girlfriends,” he wrote.

Here is the Clinton errand boy, Alexander Downer, with the walrus, Stefan Halper, a week before both were sent to spy on me. Both are just now going to be exposed for the world to see. pic.twitter.com/oXjxDNg9lm

Mr Papadopoulos insists Mr Downer then moved the conversation to Mrs Clinton to trap him.

“This meeting was anything but random. It’s hard not to think I got played, that he went into our meeting gunning for me, tripping me and goading me,” he said.

However, Mr Papadopoulos was telling a different version of events on social media on Tuesday.

“Downer was a fool. I played him the entire meeting that I knew was designed to spy on my energy-related work and then to ask a bizarre last-minute question about Clinton-Russia. The transcripts will prove it all, folks. They exist. The Australians already flipped on him,” he wrote.

Mr Papadopoulos also referred to the famous photos of Mr Downer posing in fishnets, for charity.

“I found it so odd that Downer, who gained notoriety in Australia for wearing women’s fish nets, invited me to ‘order’ me to stop ‘bothering’ his good friend David Cameron,” he said.

The New York Times later claimed the pair had an “alcohol-fuelled evening”, which may say something about the tee-totalling habits of the American because Mr Downer has previously insisted he had a single gin and tonic.

“In the imaginary land that people on the Twittersphere live in, there are suggestions that we were all rolling drunk or that I had very cunningly got Papadopoulos drunk. Impossible,” Mr Downer told ABC radio.

It was towards the end of the drinks that Mr Downer asked a simple question that unleashed the Mueller report, the official investigation into Russian interference in the election.

“I asked him whether he thought Donald Trump would be able to defeat Hillary Clinton in the general election,” Mr Downer said.

“He said he was confident he could. He said one of the reasons was that the Russians might release some information which could be damaging to Hillary Clinton.”

According to the Wall Street Journal, it was not until July 2016 that the Federal Bureau of Investigation was told about the conversation.

“We received information from an allied nation about the conversations their ambassador had in England with George Papadopoulos,” former FBI Director James Comey told Congress in December 2018.

Mr Morrison confirmed in a statement his “readiness” to comply with US President Donald Trump’s request that Australia assists US Attorney-General Bill Barr’s probe into the origins of the Russia investigation on Tuesday.

According to a New York Times report, Mr Trump “pushed” Mr Morrison during a phone call in “recent weeks” for Australia’s help in the Justice Department’s investigation.

But a letter released on Tuesday by Australia’s ambassador to the US, Joe Hockey, suggests the Morrison government did not require much pushing; it had already offered to assist on May 27.

The subsequent phone call simply confirmed that willingness in a direct discussion between the two leaders.

“The Australian government will use its best endeavours to support your efforts in this matter,” he wrote.

“While Australia’s former High Commissioner to the United Kingdom, the Hon. Alexander Downer is no longer employed by the government, we stand ready to provide you with all relevant information to support your inquiries.”