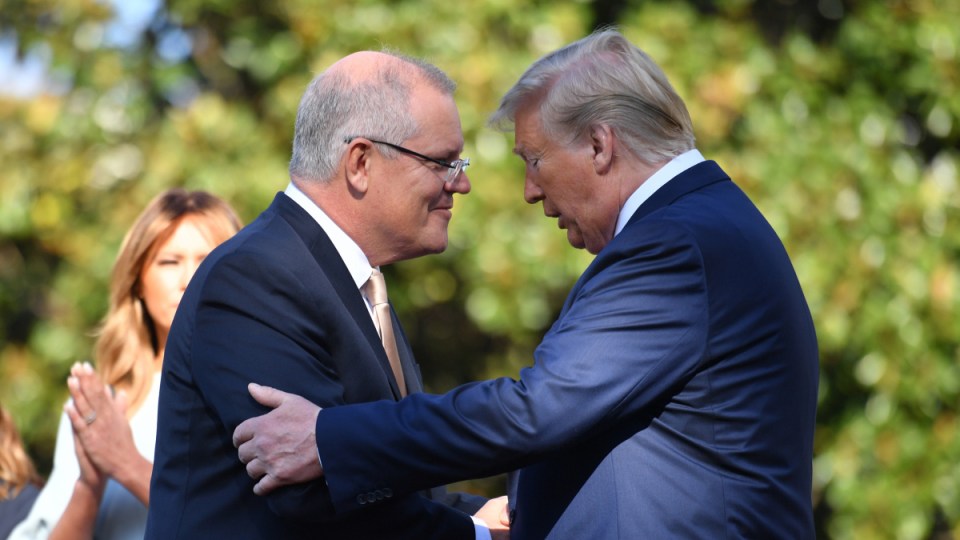 Scott Morrison has confirmed his “readiness” to comply with US President Donald Trump’s request that Australia assists US Attorney-General Bill Barr’s probe into the origins of the Russia investigation.

According to the New York Times, Mr Trump “pushed” Mr Morrison during a phone call in “recent weeks” for Australia’s help in the Justice Department’s investigation.

But a letter released on Tuesday by Australia’s ambassador to the US, Joe Hockey, suggests the Morrison government did not require much pushing; it had already offered to assist on May 27. The subsequent phone call simply confirmed that willingness in a direct discussion between the two leaders.

A Morrison government spokesman told The New Daily: “The Australian government has always been ready to assist and co-operate with efforts that help shed further light on the matters under investigation. The PM confirmed this readiness once again in conversation with the president.”

According to the New York Times, the White House made “an unusual” decision in restricting access to the Morrison call transcript to a small group of the President’s aides. The article compared this to the secrecy surrounding the July phone call with the Ukrainian president that triggered the impeachment inquiry into Mr Trump.

In the Ukrainian call, Mr Trump is accused of pushing Ukrainian President Volodymyr Zelensky to investigate former vice-president Joe Biden and his son Hunter, a move that would advance Mr Trump’s own political interests.

In the call to Australia, Mr Trump asked Australia to help in the Justice Department review of the origins of the Russia investigation, a probe the Trump administration hopes will discredit the Mueller report as a “witch hunt” rather than simply advancing broader diplomatic goals.

Australia’s links to the origins of the Mueller report are well known, hence the NYT’s observation that Mr Trump was effectively asking the Prime Minister to investigate Australia’s own conduct.

The FBI’s counterintelligence investigation into Russian interference in the 2016 election commenced after Australian officials informed the bureau it had been told Russia was peddling politically damaging information about Hillary Clinton and had sought to make links with the Trump campaign to further these activities – effectively meddling in the election campaign.

Former foreign minister Alexander Downer, who at the time was Australia’s top diplomat in Britain, was the source of that information.

In May 2016, he had drinks with George Papadopoulos, a Trump campaign adviser who Mr Downer claims boasted of a Russian dirt file on Mrs Clinton.

Mr Papadopoulos is also believed to have told Mr Downer that the Russians had “thousands” of Mrs Clinton’s emails from a man called Joseph Mifsud, an academic working in Rome. Mr Mifsud has subsequently disappeared.

However, Mr Papadopoulos, who was later jailed for 14 days for lying to the FBI, does not remember telling Mr Downer about the Russians or the emails.

He has repeatedly made bizarre claims that Mr Downer, a political conservative, was spying for the Clintons.

“A wannabe spy and Clinton errand boy who is about to get exposed on the world stage. Great reporting, NYTs! Mifsud is next,” he tweeted on Tuesday.

I have been right about Downer from the beginning. A wannabe spy and Clinton errand boy who is about to get exposed on the world stage. Great reporting, NYTs! Mifsud is next.

The FBI later secretly sent two agents to London to interview Mr Downer, a move that triggered the Russian investigation.

On May 24, 2019, the US President announced he had declassified “potentially millions of pages” of intelligence documents related to surveillance activities on his campaign to assist Mr Barr in probing the matter.

Three days later, Foreign Minister Marise Payne said Australia had not been asked to be part of Mr Barr’s investigation.

“We have not been asked to participate. We would, of course, consider such a request were it to be made,” she said.

However, just a day later, Mr Hockey confirmed that Australia volunteered to assist the investigation into the Russian probe.

He wrote to Mr Trump’s Attorney-General, William Barr, on May 28.

“I refer to President Trump’s announcement on 24 May that you will investigate the origins of the Federal Bureau of Investigation’s probe into Russian links to the 2016 US election,” Mr Hockey wrote.

“I note that the president referred to Australia, the United Kingdom and Ukraine as potential stakeholders. Moreover, I note that he has declassified intelligence material to support your investigation.

“The Australian government will use its best endeavours to support your efforts in this matter.”

“While Australia’s former High Commissioner to the United Kingdom, the Hon. Alexander Downer is no longer employed by the government, we stand ready to provide you with all relevant information to support your inquiries.”

The matter is sensitive for Mr Hockey too, because he is believed to have been personally involved in discussions with the FBI over the matter after it started probing Australia’s tip-off that the Trump campaign may be colluding with Russia to influence the 2016 Presidential election

Mr Downer confirmed his conversation with Mr Papadopoulos on Tuesday, but said he knew nothing about Mr Morrison’s phone call.

“President Donald Trump was asking for his assistance in discrediting the Mueller investigation. This is a very serious issue,” Mr Albanese said.

“He needs to explain to the Australian people exactly what happened here, exactly what his role has been, what took place in terms of this phone call.”

“What Scott Morrison can’t do here is do what he’s had a tendency to do in recent times, which is to dismiss questions which are legitimate from the media as just gossip or as just being in the bubble. He needs to actually give some straight answers to what are very clear questions.”

But Mr Albanese declined to say what he would do in the same circumstances, describing the question as a hypothetical.