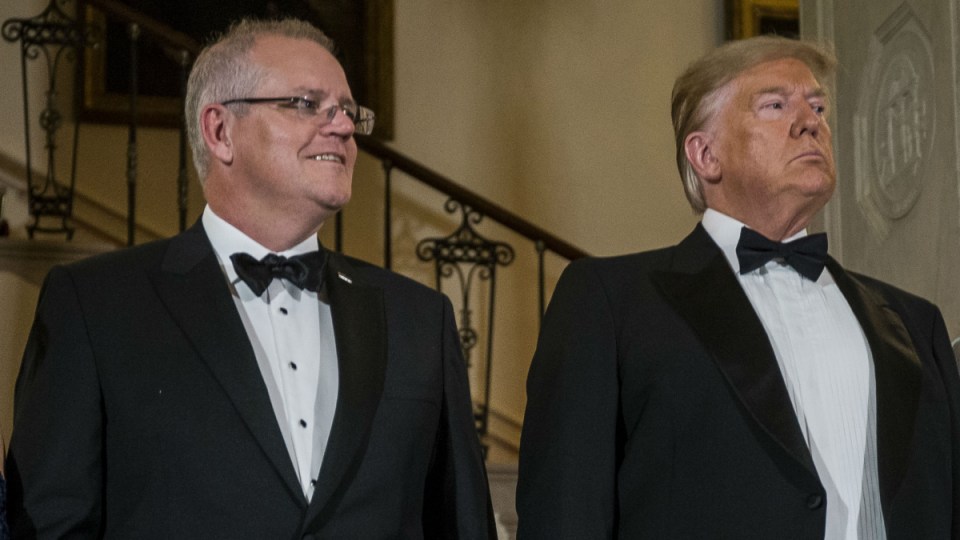 A phone call between Donald Trump and Scott Morrison is at the centre of fresh controversy. Photo: AAP

President Trump pushed the Australian prime minister during a recent telephone call to help Attorney General William P. Barr gather information for a Justice Department inquiry that Mr Trump hopes will discredit the Mueller investigation, according to two American officials with knowledge of the call.

The White House restricted access to the call’s transcript to a small group of the president’s aides, one of the officials said, an unusual decision that is similar to the handling of a July call with the Ukrainian president that is at the heart of House Democrats’ impeachment inquiry into Mr Trump.

Like that call, the discussion with Prime Minister Scott Morrison of Australia shows the extent to which Mr Trump sees the attorney general as a critical partner in his goal to show that the Mueller investigation had corrupt and partisan origins, and the extent that Mr Trump sees the Justice Department inquiry as a potential way to gain leverage over America’s closest allies.

And like the call with the Ukrainian president, Volodymyr Zelensky, the discussion with Mr Morrison shows the president using high-level diplomacy to advance his personal political interests.

President Trump initiated the discussion in recent weeks with Mr Morrison explicitly for the purpose of requesting Australia’s help in the Justice Department review of the Russia investigation, according to the two people with knowledge of the discussion. Mr Barr requested that Mr Trump speak to Mr. Morrison, one of the people said.

It came only weeks after Mr Trump seemed to make military aid to Ukraine contingent on Mr Zelensky doing him the “favour” of helping Mr Barr with his work.

A Justice Department spokeswoman declined to comment. A White House spokesman did not immediately respond to a request for comment, nor did a spokesperson for the Australian prime minister.

BREAKING: A White House source has confirmed to the ABC that President Trump did make a request of Australia’s Prime Minister Scott Morrison that he assist US Attorney General William Barr in investigating the origins of the Mueller report. @BreakfastNews

In making the request, Mr Trump was in effect asking the Australian government to investigate itself.

The F.B.I.’s counterintelligence investigation into Russian interference in the 2016 election began after Australian officials told the bureau that the Russian government had made overtures to the Trump campaign about releasing politically damaging information about Hillary Clinton.

Australian officials shared that information after its top official in Britain met in London in May 2016 with George Papadopoulos, a Trump campaign foreign policy adviser who told the Australian about the Russian dirt on Mrs Clinton.

Mr Papadopoulos also said that he had heard that the Russians had “thousands” of Mrs Clinton’s emails from Joseph Mifsud, an academic. Mr Mifsud, who was last seen working as a visiting professor in Rome, has disappeared.

The Justice Department spokeswoman would not say whether he discussed the election inquiry in those meetings, but former Justice Department officials said that Mr Barr would need to ask foreign countries for cooperation in turning over documents pertaining to the 2016 election.

Mr Barr began a review of the Russia investigation this year with the stated goal of determining whether law enforcement or intelligence officials acted inappropriately in their decision during the height of the 2016 presidential campaign to begin investigating whether the Trump campaign was conspiring with Russia’s election interference.

But the president has made no secret he sees a larger purpose: to validate his victory and to settle scores with his perceived “deep state” enemies.

The Justice Department said last week that it is exploring the extent to which other countries, including Ukraine, “played a role in the counterintelligence investigation directed at the Trump campaign.”

At the very least, Mr Barr has made it clear that he sees his work treading into sensitive territory: how the law enforcement and intelligence agencies of the United States’ closest allies share information with American officials.

Mr Mueller’s investigation confirmed that Australia played a central role in the origins of the original F.B.I. investigation, even if his final report does not mention the country by name.

It said that information from a “foreign government” prompted the F.B.I. to “open an investigation into whether individuals associated with the Trump campaign were coordinating with the Russian government in its interference activities.”

But like so much about the pre-election period, the episode has been the subject of a counternarrative marbled with conspiracy: that the Obama administration had dispatched the Australian official, Alexander Downer, to spy on the Trump campaign as part of a broader effort to help Mrs Clinton get elected.

There is no evidence to support this, but the conspiracy has been advanced by some of the president’s allies in congress, by some Fox News commentators, and in frequent tweets by Mr Papadopoulos.

This is a developing story.