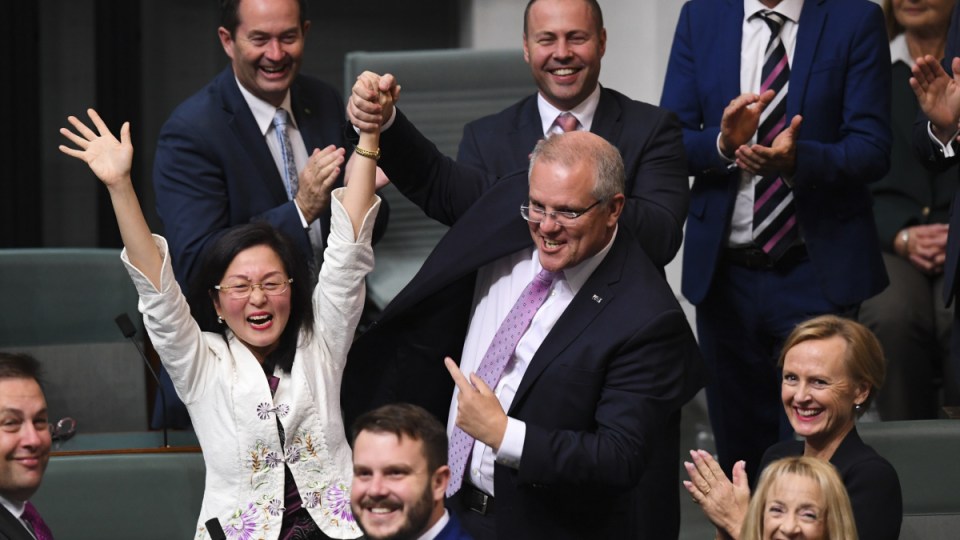 Ms Liu with PM Scott Morrison after her maiden speech to Parliament.

Liberal MP Gladys Liu has backflipped on her claim she “cannot recall” her membership of a group linked to China’s foreign influence operations in a new statement prepared by the Prime Minister’s office.

Describing claims she was not loyal to Australia as “deeply offensive”, the Hong Kong-born MP also admitted on Wednesday she should have chosen her words better.

During a train-wreck interview on Sky News on Tuesday, Ms Liu said she could not recall her membership of China Overseas Guangdong Exchange Association, in Guangdong and Shandong.

“I can tell you that I have never been a member of this council and, yeah, it can happen. They can put your name there without your knowledge.”

However, less than 24 hours later, Ms Liu contradicted herself, admitting she held an “honorary role of Guangdong Overseas Exchange Association in 2011. I no longer have an association with this organisation”, she said.

Ms Liu’s statement again claims names are sometimes added without permission by organisers of such groups. But it does not explicitly make it clear if this was the case.

“Unfortunately, some Chinese associations appoint people to honorary positions without their knowledge or permission. I do not wish my name to be used in any of these associations and I ask them to stop using my name,” she said.

Her statement goes on to suggest she might retain membership of further organisations that could yet come to public attention, noting “I am in the process of auditing any organisations who may have added me as a member without my knowledge or consent”.

“I am a proud Australian, passionately committed to serving the people of Chisholm, and any suggestion contrary to this is deeply offensive,” she said.

“Last night, in a TV interview, I was not clear and I should have chosen my words better. As a new member of Parliament, I will be learning from this experience.

“Australia’s long-standing position on the South China Sea is consistent and clear. We do not take sides on competing territorial claims but we call on all claimants to resolve disputes peacefully and in accordance with international law,” she said.

Ms Liu’s statement confirms she was previously an honorary president of the United Chinese Commerce Association of Australia and held the same position with the Australian Jiangmen General Commercial Association in 2016.

Ms Liu’s refusal to deliver a formal statement to the House of Representatives, where she faces serious penalties for misleading Parliament, is likely to increase the pressure on the Victorian MP.

A visibly distressed Ms Liu was seen being hugged and comforted on the floor of Parliament on Wednesday after she found herself at the centre of a media firestorm after the interview.

Ms Liu’s office confirmed to The New Daily on Wednesday that she will not make a statement to Parliament. All queries were referred to the Prime Minister’s own media team, which is highly unusual.

The Hong Kong-born MP also repeatedly declined to describe Chinese President Xi Jinping as “a dictator” during the interview, despite insisting her first loyalty was to Australia.

Labor Senate leader Penny Wong said Prime Minister Scott Morrison was now facing his own “Sam Dastyari test’’, referring to the Labor senator who was forced to quit Parliament over his links to Chinese donors.

“I would make this point: I can recall the Liberal Party making Sam Dastyari a test for the Labor leadership, well, this is Scott Morrison’s test.”

Mr Dastyari was forced to quit politics in 2018 over his links to Chinese donors.

It’s clear @GladysLiuMP needs to answer some serious questions. Her statement is shocking. She should be held to the same standard that I was – a standard the PM set. I resigned. I took responsibility. That was the right decision in my circumstances.

Ms Liu was first elected at the 2019 election in the Victorian seat of Chisholm, in a close-run race against Labor’s Jennifer Yang

Ms Liu’s appearance on Sky was in response to an ABC news report that revealed her name has been linked to China’s United Front Work Department, which President Xi has called one of the Chinese Communist Party’s “three magic weapons”.

During the Sky interview, it was pointed out that Ms Liu is also an honorary president of the Australian Jiangmen General Commerce Association. Bolt noted the organisation had “backed China’s theft of the South China Sea”.

Asked whether she agreed with the Permanent Court of Arbitration in The Hague that China’s actions were “unlawful”, Ms Liu said it was a question for the others.

“This is a matter for the Foreign Minister. I definitely put – I would put Australia’s interests first, and that’s exactly what I have been doing. I look after my electorate of Chisholm and I work with the government to put interests of Australians first,” she said.

Ms Liu denied reports that the Victorian Liberal Party had been forced to return more than $300,000 from fundraising auctions – with prizes of a dinner with Malcolm Turnbull – because of security concerns over the successful bidders that she had brought to the event.

“Yes, I was in the room and I had quite a number of guests there. However, there was no such thing of $300,000 being returned because of a dinner that didn’t happen. That is completely false,” she said.

Asked if President Xi, who has detailed Christians and Muslims in re-education camps, was “a dictator”, Ms Liu said she was more focused on her electorate.

“That’s exactly what I have done since the the election. I only had one day off in the last 3.5 months,” she said.

“I do have an opinion, but I’m not going to use the word ‘dictator’. He is, in their system, an elected chairman or president, they call it, for China.”

“Gladys Liu, are you, in effect, a spokesman for the Chinese Communist regime in Australia,” Sky News host Andrew Bolt then asked.

“The simple answer is no,” she said.