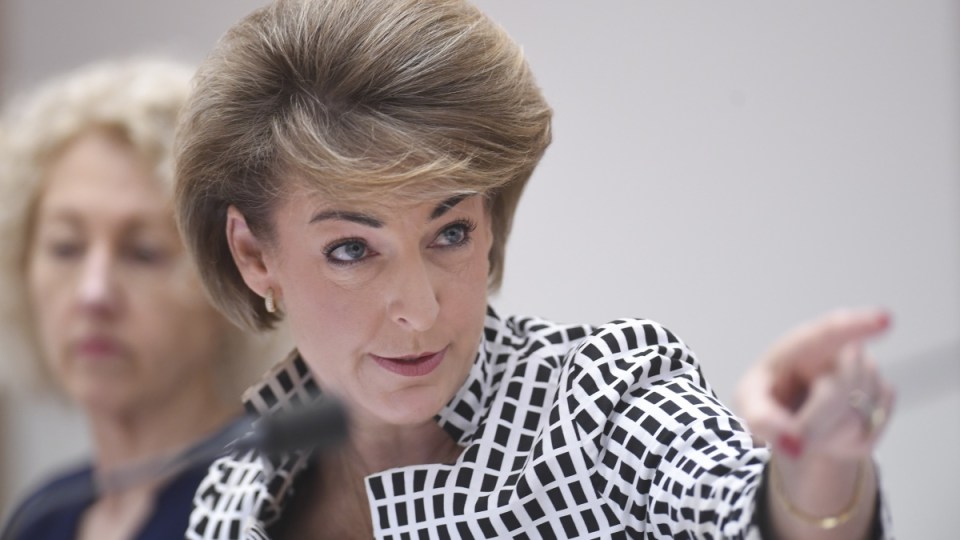 Michaelia Cash says Australia is working from "a good economic base". Photo: AAP

Channel 7’s morning show Sunrise has been pilloried for its handling of the Newstart debate, following what it later conceded was a “badly phrased” segment that aired this morning.

“New figures have been released showing just how many dole bludgers are trying to take advantage of the welfare system,” Barr stated.

“An alarming number of people on Newstart are being penalised.”

The figures in question, released by the government, show almost 80 per cent of Newstart recipients have had their payments suspended at least once over the past year.

Sunrise then rammed the point home by subsequently tweeting about the segment, characterising the issue as one of fecklessness.

The Channel Seven breakfast show tweeted that the figures were a sign of how many ‘dole bludgers’ were trying to ‘take advantage’ of the system.

This is rubbish. Centrelink clearly suspending payments for all sorts of ridiculous reasons punishing vulnerable people for no good reason. Perhaps look into that too https://t.co/fu7WasIgOg

These days I often find myself asking “Is this really who we’ve become?” Then I read something like the @sunriseon7 tweet and realise: yes. Yes it is.

You’re right. This was badly phrased and later corrected. I apologise. Nat https://t.co/6vvr4T8645

We made a mistake today Juanita. We’re sorry for it. I’ve apologised. It shouldn’t have happened. Nat https://t.co/due66foGX0

The Morrison government stands accused of trying to resurrect the “dole bludger” stereotype as it pushes back against growing calls to increase the Newstart unemployment benefit.

Employment Minister Michaelia Cash had said the debate around the rate of the Newstart benefit did not consider how many people lose their payments.

On Wednesday, Senator Cash released figures showing a majority of payments had been suspended because the recipients missed appointments.

She said the figures showed the penalty and demerit system was working as intended, highlighting how recipients re-engaged after receiving the punishment.

“When participants have their payments suspended up to 52 times in less than a year, they are not living up to what the taxpayer, who are giving their hard-earned money to the government, expects,” she said on Wednesday.

Nearly four-in-five of 744,884 Jobactive participants had payments suspended at least once in the 12 months to the end of June.

One-in-12 job-seekers racked up 10 or more suspensions in the year, and one person had payments suspended 52 times.

Not everybody echoed Senator Cash’s sentiments, however, with stories abounding about the difficulties of trying to maintain dignity on the current rate.

The Australian Council of Social Service labelled the figures alarming but said it had predicted similar results.

“I hope the Minister understands that when you have the kind of findings that she’s released today, it is the system that’s the problem, and the automation has become brutal for people,” chief executive Cassandra Goldie said.

Labor frontbencher Jason Clare said while people on Newstart should follow the rules, the government was depicting recipients as “dole bludgers”, “surfies up the coast” or “pot-smoking hippies”.

“The truth is very different,” he told Sky News.

“The biggest group of people on Newstart are older people in their 50s, in their 60s. They are not old enough to get the pension but they are finding it really hard to get back into the workforce.”

“They didn’t go to the last election promising an increase in Newstart, they said they would have an inquiry, whatever that might mean,” he told Sky News.

“Now, after the election, they would love to see any expenditure to make sure we don’t reach a budget surplus. They are now just trying to do a demolition derby on the government.”

Senator Cash’s release of Jobactive figures comes as momentum builds for a push to increase the $277-a-week Newstart payment.

Several Coalition backbenchers, including former Nationals leader Barnaby Joyce, have added their voices to those from Labor, the Greens, business and welfare lobby groups, seniors, doctors, the Reserve Bank of Australia, and the Country Women’s Association in saying the payment is inadequate.

The National Aboriginal Community Controlled Health Organisation has also weighed in, saying many Aboriginal and Torres Strait islander people face a daily decision of whether to pay their bills or feed their family, as they are unable to afford both.

A new Liberal senator, who led mining magnate Andrew Forrest’s indigenous jobs program, called for reforms to the program in his first speech to federal parliament on Tuesday.

“Failure in this policy area is not an option,” Senator Matt O’Sullivan told the upper house.