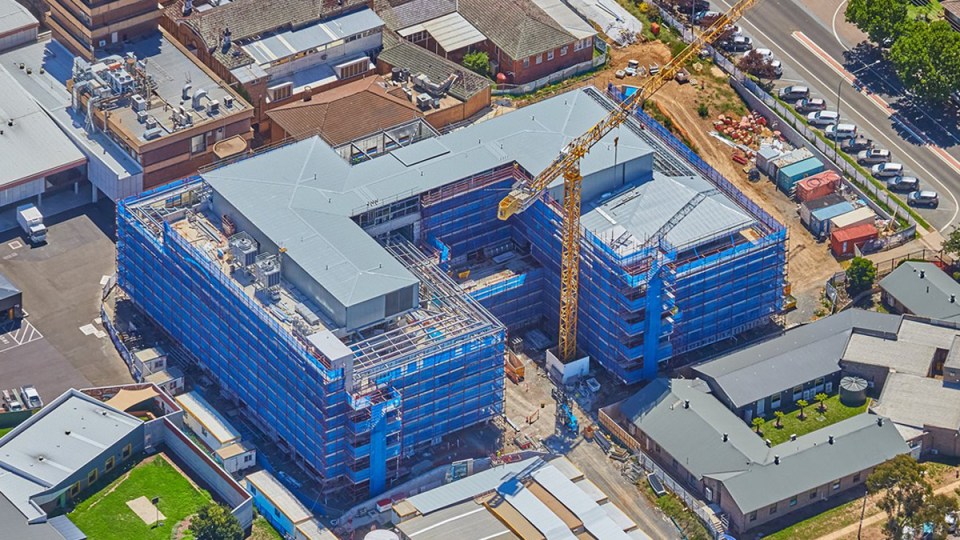 A Sydney-based worker at the Goulburn Hospital construction site has been confirmed with COVID. Photo: NSW government

NSW has 89 more local coronavirus cases including, for the first time in this most recent outbreak, one in a regional area.

The state has also reported its second COVID fatality of 2021, with the death of man in his 70s from Sydney’s eastern suburbs.

It is not known if he was vaccinated against the virus.

His death follows the fatality of a virus patient in her 90s last weekend.

Tuesday’s cases included 21 people who spent at least some time in the community while infectious.

“That is the number we need to get down to as close to zero as possible,” Premier Gladys Berejiklian said.

One of the new cases is a painter who travelled more than 200 kilometres from home in south-western Sydney to work on the construction site of the new Goulburn Hospital, in the NSW southern tablelands.

He was infectious at work on July 9, although he has been in isolation since July 10.

His positive case has spurred a new health order that will make it compulsory for people who live in Fairfield, the Sydney local government area that has been hardest hit by recent cases, to have a COVID test every three days if they are travelling outside the area for work.

“[This is] even if they don’t have symptoms – just to make sure that we reduce the incidence of essential workers passing on the virus,” Ms Berejiklian said.

Tuesday’s cases were a welcome drop on the record 112 reported on Monday. But the Premier warned “one day is not a trend”.

“The number also keep bouncing around. We have to say that,” she said.

“But I do want everyone to know that our efforts will make a difference. Our efforts will allow us to leave the lockdown in a timely way, but that is dependent on all of us doing the right thing at all times.”

She also gave her clearest hint yet about plans for beyond Friday, when the Sydney lockdown had been planned to end. The likelihood of a longer lockdown has firmed in recent days, as authorities battle to deal with a dramatic spike in COVID-19 cases in the city’s south-west.

“I am hoping to make an announcement today or Thursday at the latest in relation to the future of the lockdown,” Ms Berejiklian said.

“I would love to say exactly when the end date will be but that is up to all of us in part.”

There were more than 49,000 tests across NSW in the 24-hour reporting period.

The majority of the latest cases are close contacts of people who already had the virus. But chief health officer Kerry Chant said the number of people in the community while infectious was still too high.

While Fairfield remains of most concern, there are other areas that are also sparking alarm. They include: Roselands, Rosebery, Canterbury, Belmore, Sutherland Shire, the St George area and West Hoxton and Glenfield and Green Valley.

“It is critical that we do not become complacent across the rest of greater Sydney,” Dr Chant said.

“The risk exists everywhere, and every time someone leaves your house, you have to assume that the person that you may be encountering at the shopping centre has got COVID. So act accordingly.”

Earlier, Goulburn, Mayor Bob Kirk said the hospital worksite had been shut down.

It is the first case detected outside greater Sydney since the Bondi outbreak began a month ago. Mr Kirk said he feared essential work permits might be putting regional towns at risk.

“The COVID disease doesn’t ask people if they have a travel exemption or not, it just attaches to whoever it can,” he said.

“I understand he is a painter … I don’t know how that qualifies as essential right now.

“I know there are more than a few painters around this place that could step up if needed.”

Dr Chant said authorities remained concerned about the virus being seeded into regional NSW. Protective measures included mask-wearing and density requirements for people who left Sydney to work in the country.

“People are permitted to go to the regions … for essential work but if you are doing that, all you can do is do that essential work and go home,” she said.

“You can’t go to pubs, clubs, hospitality, anything else. You can only go there and do your essential work and obviously get your essential food and groceries. The restrictions that apply to you if you are living in Sydney, they apply to you when you are in the regions.”

The outbreak that began in Bondi in mid-June has now grown to 767 cases.

NSW has 65 COVID-19 cases in hospital. There are 21 in intensive care, four of whom require ventilation.