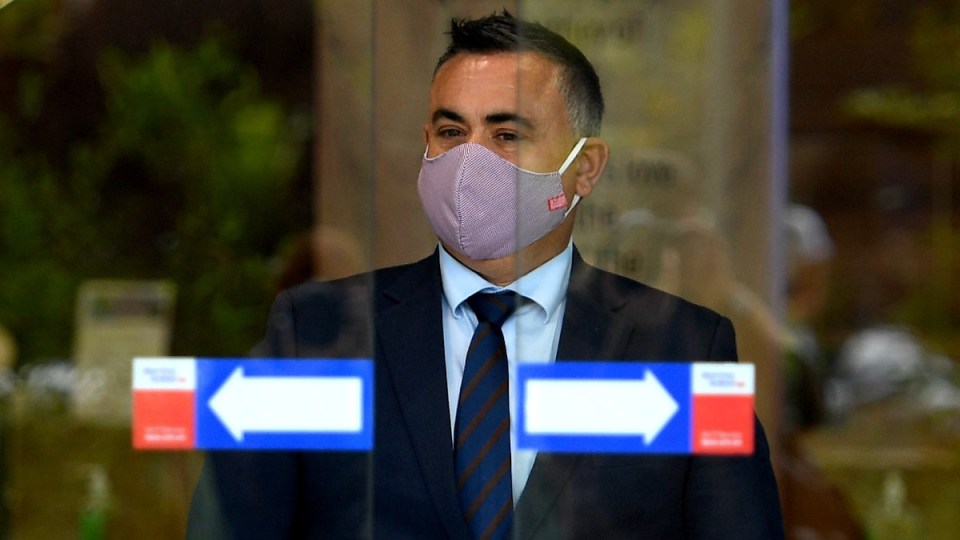 Greater Sydney and surrounds could remain locked down for weeks as authorities battle to deal with with an “out of control” spike in COVID-19 cases in the city’s south-west.

Of the 112 new NSW cases on Monday, 84 emerged in south-west Sydney.

The area is now the epicentre of the outbreak and authorities are desperate to stop people going to work while unknowingly infectious.

As five million people in Greater Sydney endure a third week of lockdown, he said the situation would likely stretch out for weeks.

“[I’m] not sure about longer than six weeks … I think we’re all certain it will extend beyond this week,” he told Nine Network on Tuesday.

“It’s the roller-coaster ride we’re on.”

Mr Barilaro said the situation in Sydney was “out of control”.

“What we are now doing is fighting hard and working with our community to make sure we get on top of it so we can come out of lockdown sooner rather than later,” he said.

He also hinted at stronger measures ahead for some particularly hard hit areas – although ruling out curfews, as used in Victoria.

“I can promise you that there’s never been a conversation around curfews or going even further,” he told Sky News.

“We may have to go further or tighten restrictions in some local government areas, we accept that but what does that mean?

Meanwhile, a joint NSW and federal government relief package to help people and businesses suffering financial hardship after three weeks of little or no income will be announced on Tuesday.

The federal government COVID disaster weekly payments will reportedly rise to $600 a week, up from $500, for those who have lost 20 hours of work or more.

The package will include JobKeeper-style increased cash flow payments for businesses to cover costs and wages, so long as no worker is sacked.

School students start term three across NSW on Tuesday with pupils in greater Sydney, including the Blue Mountains, Central Coast, Wollongong and Shellharbour learning from home for at least this week. Children of essential workers will be supervised at school.

About 12,000 teachers and school staff will be prioritised to get vaccinated at a mass hub at Fairfield showgrounds from Friday.

NSW Education Minister Sarah Mitchell said both AstraZeneca and Pfizer vaccines would be available to school staff in three of south-west Sydney’s local government areas that are COVID hotspots.

She said she had been advocating that all teachers be vaccinated for nearly a year but had been rebuffed because of a lack of supplies.

“We’ve prioritised teachers in these areas … and I think this is a good first step,” she told ABC Radio.

Ms Mitchell admitted it was challenging for teachers and parents to deal with home schooling but was unable to say how long hundreds of thousands of students would be learning from home – while flagging it was unlikely to end on Friday as originally anticipated.

“We want to give parents certainty. We’ve seen numbers go up significantly in the past two days and I think that has changed the settings,” she said.

“We anticipate we will be able to tell parents and teachers within the next day or two what next week will look like.”

On Monday night, NSW Health flagged more than 20 new venues of concern and there are about 30 Sydney bus and train routes associated with confirmed cases of COVID‑19.

Anyone who attended six venues in Sydney’s south-west – including Ware Street Medical Practice, iMedic iCare Medical Centre, Neeta City Shopping Centre and Westpac – all at Fairfield, as well as shops and 99 Bikes at Bondi Junction, are considered close contacts and must get tested and isolate for 14 days, regardless of the result.

And about 150 rough sleepers will get Pfizer COVID-19 vaccinations at the Reverend Bill Crews Foundation at Ashfield in Sydney’s west on Tuesday.

“It’s taken me months to secure these vaccines for the homeless and rough sleepers who we care for,” Reverend Crew said.

NSW has had 678 COVID-19 cases in the community since June 16, when the Bondi cluster first emerged.

The AstraZeneca jab will be made available to all people aged over 40 at NSW mass vaccination clinics, and pharmacies will be able to administer it to that age group.

A new mass vaccination hub will also be established at Fairfield in south-west Sydney.

‘Out of control’: Deputy Premier hints at weeks of lockdown in Sydney