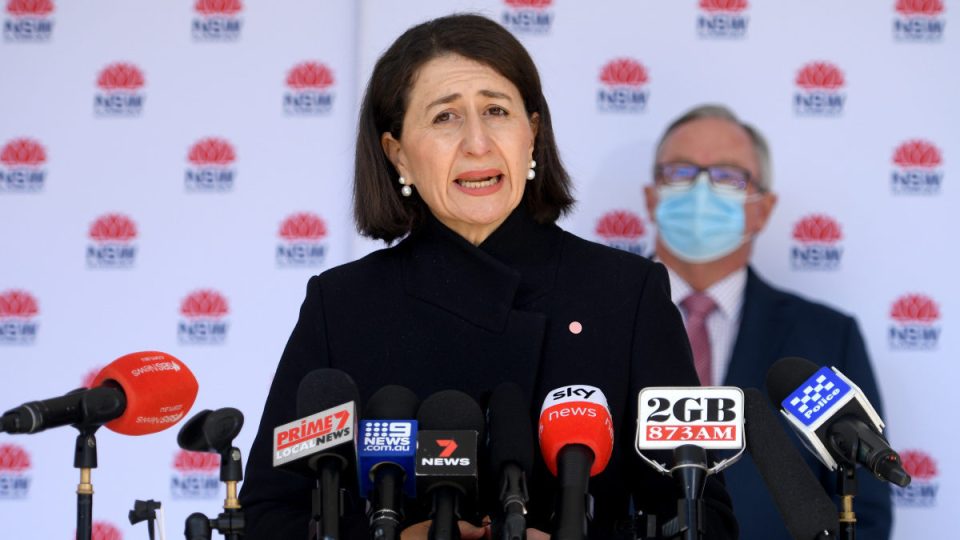 NSW has witnessed the COVID death of a woman and 77 new locally acquired COVID-19 cases in the 24 hours to 8pm Saturday night.

The unnamed woman, aged in her 90s, was a close contact of a known case and confirmed positive on Saturday after being tested the day before, subsequently succumbing to the killer virus in Liverpool Hospital.

NSW Premier Gladys Berejiklian said that of the 77 new cases, only 32 were in isolation for the entirety of their infectious period.

The woman’s death is the first since the Bondi cluster emerged on June 16, and the 57th person in NSW to die since the start of the pandemic in early 2020.

The woman is also the first person to catch COVID-19 locally in Australia in 2021 and die.

More than 48,000 tests were taken during the latest  reporting period, and 106 lockdown infringement notices issued.

Premier Gladys Berejiklian was grim in predicting the number of infections would continue to grow.

“I’m anticipating the numbers in NSW will be greater than 100 tomorrow,” she told reporters late on Sunday morning.

“So we can’t stress enough the importance of not only following the rules but also realising the risk that [to] people who will suffer the most.

“If you don’t worry about yourself, that’s your decision.

“But think about your closest family members, your closest people in your life, they’re the people that are most impacted.”

Ms Berejiklian said the tide would turn “once the impact of the changes we’ve made come to fruition”.

“When you get COVID, unfortunately those most impacted are those closest to you, and tragically we’ve seen one older person die and I want to extend my deepest condolences to their family and loved ones.”

There are now 15 COVID-19 patients in NSW in intensive care, with five being ventilated.

NSW Treasurer Dominic Perrottet, meanwhile, has acknowledged the state government will need to stump up significantly more financial assistance to businesses and individuals as the likelihood of a long-term Greater Sydney lockdown grows.

He said the NSW government may also make use of federal income-support platforms to administer state government-funded financial assistance, if required.

The lockdown of Greater Sydney is due to end on July 16 but both Ms Berejiklian and Mr Perrottet have in recent days admitted it will likely be extended.

Mr Perrottet on Sunday said he expected the lockdown provisions to be extended and this would, in the absence of JobKeeper, cause major damage to businesses and workers.

He said the government would thus be obliged to splash more cash on assistance, and that a second business support package would be announced later this week.

NSW has already spent $1.4 billion on business support amid the current lockdown.

“Last year there didn’t seem to be any light at the end of the tunnel whereas now the vaccine program is rolling out across the state – this gives hope this will hopefully be the last time we have to go through this,” Mr Perrottet told Sky News.

“We’re going to have to do more, that’s just the reality.”

Mr Perrottet was reportedly opposed to the extension of the initial two-week lockdown in Greater Sydney and surrounds due to its effect on business.

NSW Health on Saturday issued numerous alerts for venues of concern across Sydney.

They include Coles at Kareela, a KFC in Rockdale, Penrith Barbeques Galore, a Bunnings in Padstow and a popular cafe in Centennial Park.

The Broadway Shopping Centre in Ultimo posted on social media it had been alerted to a COVID-positive shopper who visited on Thursday.

Several major outlets, including Aldi, Kmart and JB Hi-Fi, were visited by the case and NSW Health on Saturday evening listed the centre as a venue of concern.

After a further update to public health orders, Sydneysiders are now required to wear masks in all indoor areas of construction sites and common areas of apartment blocks.

The new rules come after city-wide restrictions were tightened on Friday afternoon, with exercise now limited to groups of two and only one person per day from each household allowed to leave the house to go shopping.

NSW woman dies and 77 new cases of COVID, with numbers set to keep on rising