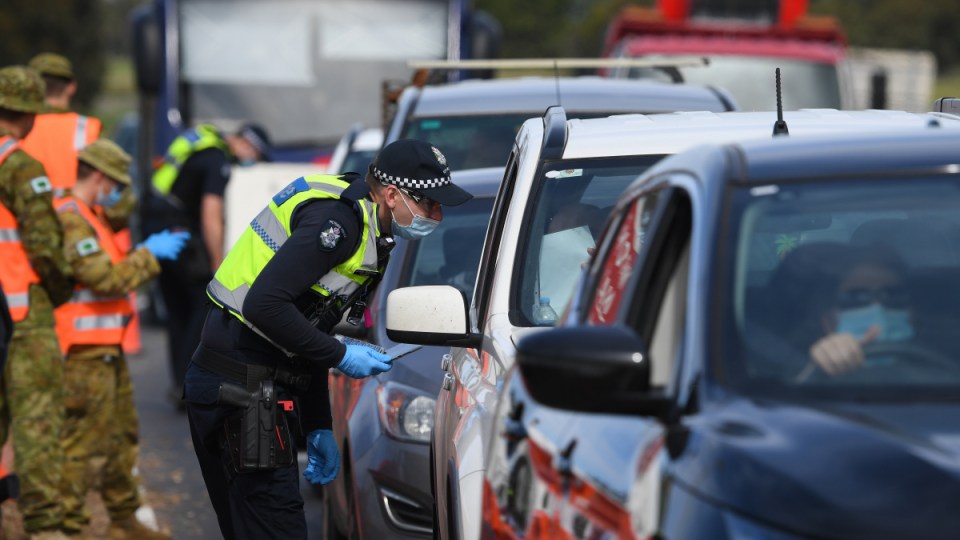 The Premier has declared the 'hard border' around Melbourne will 'definitely' stay. Photo: AAP

Victorian Premier Daniel Andrews has promised good news for millions of lockdown-weary Melburnians this weekend – but one of the city’s more controversial virus measures is going nowhere.

Mr Andrews fronted the media in good spirits on Friday, after a dive in new infections to just two.

“Today is a day where we can be optimistic and we can be positive,” he said, promising to announce “significant steps” on Sunday.

Friday’s daily case tally is Victoria’s lowest since June 9 when it had no new infections in the last days before its deadly second wave took hold.

The rolling 14-day average for metro Melbourne is down to 8.7, still well above the target of five set out in the state government’s plan to reopen.

Authorities have already conceded the target cannot be met by Sunday, when Mr Andrews has said he will announce Victoria’s next steps out of lockdown.

On Friday, he refused again to say what measures will change. But he reassured Melburnians still living under Stage 4 restrictions that while the steps would not be as outlined in the state government’s ‘roadmap’, they would be “significant”.

“It will not be everything that everyone wants, because it’s not safe to take all of those steps that were outlined in Stage 3. But on Sunday we very much look forward to giving people a sense of what the coming weeks look like,” he said.

“Regional Victoria will be able to go further again, beyond the scope of the rules that they’re in now.”

However, he was clear on some rules that will remain – such as the so-called ‘ring of steel’ of police and Australian Defence Force checkpoints surrounding metropolitan Melbourne. Golf will also still be off limits.

“I can definitely confirm for you that the hard border between metropolitan Melbourne and regional Victoria will stay,” he said.

“I can’t tell you how long that will stay.”

Mr Andrews said the hard border that prevented Melburnians from travelling to regional areas without a permit helped to protect country communities. In fact, the Premier confirmed on Thursday he had asked the federal government for more ADF support to bolster the checkpoints.

Mr Andrews – a confirmed golf fan – also dashed the hopes of Melbourne residents who might have been hoping to book a round.

“I can tell you that clubhouses will not be open on Monday but if we can take other stops to give people back a few of the things that they love, the things that will give them a bit of sense of normality … they are the sort of things we will be looking at,” he said.

In regional Victoria, the 14-day average of new infections remained at 0.6 on Friday, despite outbreak that sparked alarm in the regional city of Shepparton earlier in the week.

It was started by a Melbourne truck driver, who has been referred to Victoria Police after initially failing to disclose he visited the city on September 30.

Health authorities expect further results of a COVID testing blitz in the area to be returned by Friday night. Any positive cases will be included in Saturday’s figures.

Mr Andrews said about 2000 tests conducted on Wednesday had already come back negative.

“There will be rules, it’s not a reason to go and travel outside metro Melbourne and have a de facto few days off. It’s about responding to the fire risk in a community where you’ve got a property,” he said.

NSW had five new coronavirus cases overnight, including just one from community transmission, as rules eased for open-air concerts and outdoor dining.

Four of the new cases reported on Friday were returned overseas travellers in hotel quarantine.

The lone locally acquired infection is linked to the cluster at a medical clinic in Lakemba, in Sydney’s south-west.

NSW chief health officer Kerry Chant said a child and worker at the Great Beginnings childcare centre at Oran Park had also tested positive and would be included in Saturday’s figures.

“I would ask anyone who is at that childcare centre to immediately isolate,” Dr Chant said.

Dr Chant also said anyone who attended the A2Z Medical Centre in Lakemba between September 25-October 2 should get tested.

Under rules that came into effect on Friday, up to 500 people can attend open-air concerts in NSW, as long as they stay seated and remain four metres apart.

Restrictions for outdoor dining venues have also been relaxed, allowing one patron per two square metres. Venues must use QR codes to record patrons’ contact details.