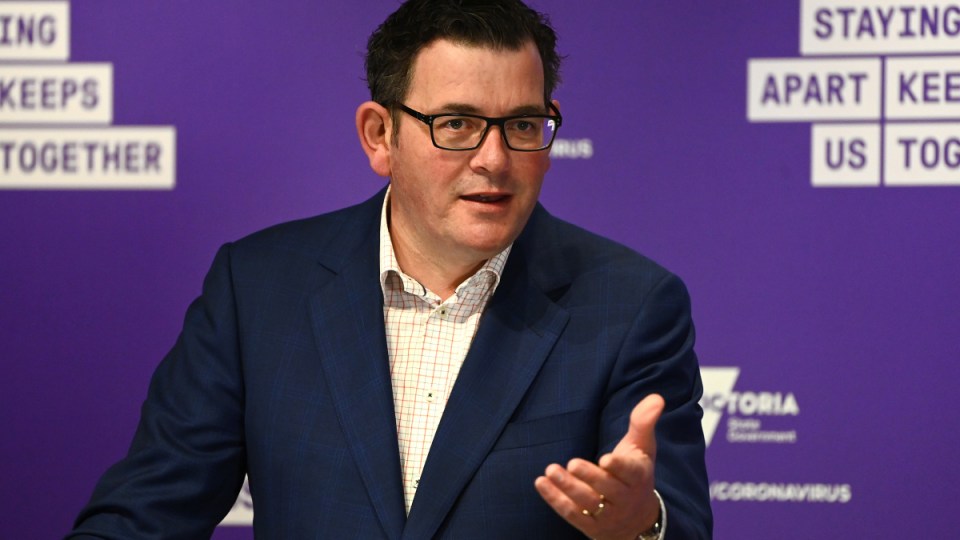 Victorian Premier Daniel Andrews has torn up his roadmaps out of coronavirus lockdowns after Melbourne’s fifth day of double-digit case increases.

Mr Andrews signalled on Monday that dates and steps set out in the plan to reopen Victoria after its devastating second wave of COVID-19 could again be altered because of the virus’ “dynamic nature”.

“Plans are forecasts and they are what you hope to do all things being equal, he said.

On Sunday, he promised “significant” changes to Melbourne’s virus rules on October 19, but warned they might not be as extensive as hoped, or originally planned as the city’s number of new cases remained stubbornly high.

“At no point have I ever sought to guarantee that we would be able to deliver an outcome on a day,” he said on Monday.

“At no point have I said to people that these are a stone tablet and on this date we will take the following step. It has always been heavily caveated to say subject to how much virus there is and how much narrative sits behind those cases.”

Victoria had its fifth consecutive day of double-digit new infections on Monday, with 15 more confirmed.

Melbourne’s crucial 14-day average of new cases also rose slightly to 9.9, dashing the hopes of millions as – under the current roadmap –  it must fall below five by next weekend to allow virus rules to be wound back.

That target is now an impossibility even if the city has no cases for the rest of this week.

The number of mystery cases in the city in the past fortnight – another benchmark measure – has also risen to 11.

The Premier conceded current targets might no longer be realistic – and the roadmap might need to change tack, moving towards managing the risks of the virus instead of trying to beat it.

“If that lower number is just going to be too hard to get to, then that’ll mean the task of keeping these numbers low will be even greater,” he said.

“This is not some doctoral thesis where we will keep everyone locked up until we get to zero. We will have to make judgments about what is achievable.”

Also no Monday, more than half a million Melbourne students returned to classrooms.

But will have to wait a little longer after a coronavirus case forced their school closure.

Nazareth College, a Catholic senior school in Noble Park in the city’s south-east, was meant to reopen to year seven and VCE students on Monday.

But a positive case from a student, a year 12 pupil who sat last Wednesday’s General Achievement Test (GAT), scuppered plans.

Nazareth College principal Sam Cosentino said the school was contacted about the positive case at 7.30pm on Sunday, quickly alerting parents to keep kids home for Monday and allaying their concerns.

The school is likely to reopen on Tuesday or Wednesday at the latest.

Earlier, federal Treasurer Josh Frydenberg blasted Mr Andrews, urging him to “give people back their freedom”.

“My message to Daniel Andrews is to get on with it,” Mr Frydenberg told Nine’s Today on Monday.

But, in response to growing criticism about Melbourne’s strict Stage 4 lockdown – which has been in place since August 2 – Mr Andrews said he could not pretend the virus crisis was over.

“That’s not leadership,’ he said.

“You’d be popular for five minutes and then the hospitals will be overrun and all the people calling for us to open up – including some members of the federal government I might add – I don’t think they will be standing beside me having to explain why our hospital system is completely overrun.

“You won’t see them for dust”

Department of Premier and Cabinet secretary Mr Eccles resigned after phone records revealed he spoke to the head of police as the state’s disastrous hotel quarantine program was set up.

Mr Eccles had previously told the inquiry he did not recall speaking to Mr Ashton about the arrangements.

On Monday he conceded records showed he spoke to former Victoria Police chief commissioner Graham Ashton at 1.17pm on March 27, the day it was decided private security guards would staff quarantine hotels.

Mr Eccles maintained that his evidence to the inquiry was true, and claimed he did not recall the phone call with Mr Ashton until he saw his own phone records.

“The telephone records do not in any way demonstrate that I, or indeed anyone else in DPC made a decision that private security be used in the hotel quarantine program,” he said.

The use of private security guards has been blamed for the state’s devastating second wave of coronavirus, which has killed hundreds of people and led to the nation’s toughest lockdown.

Health Minister Jenny Mikakos resigned in September for her role in the program.

Mr Andrews said he was “shocked” when told of Mr Eccles’ decision.

“Until last night, I had understood that Mr Eccles did not know if he had telephoned Mr Ashton at that time. That matter is now beyond doubt,” he said.

NSW has confirmed six new cases of coronavirus, including one locally acquired and five in returned travellers in hotel quarantine.

Fresh public health alerts were issued on Sunday for shops in Sydney’s south-west as NSW grapples with a resurgence in virus cases.

It has a growing cluster linked to a private health clinic in Liverpool growing, while patients from a Lakemba clinic have been told to monitor for symptoms.

Not written on a ‘stone tablet’: Premier tears up Victorian COVID roadmap