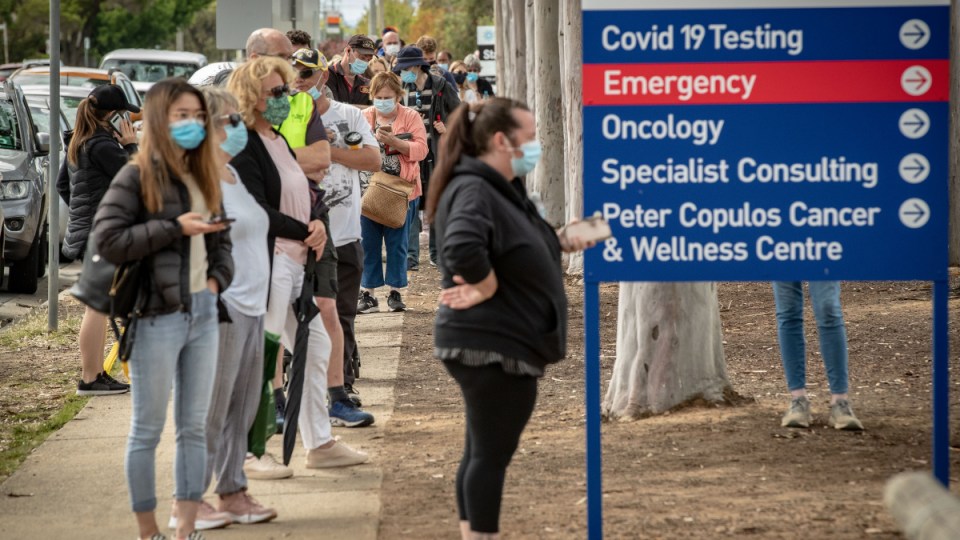 Shepparton locals have queued for testing for hours this week, after a COVID outbreak in the town. Photo: Getty

Just two coronavirus cases were reported in Victoria on Friday, and no deaths, as the state made more welcome progress towards easing restrictions this weekend.

Friday’s figure is the state’s lowest daily tally of new COVID infections in more than four months – since there were four new cases on June 10 and 12 and none on June 9.

In further good news for lockdown-weary Melburnians, the city’s crucial 14-day average has fallen to 8.7.

It is still well above the five set as the target in the state government’s plan to reopen. Authorities have already conceded the target cannot be met by Sunday, when Premier Daniel Andrews is to announce Victoria’s next steps.

But Mr Andrews has confirmed he will announce “significant steps” for Victorians, “although they will not be as big steps as we hoped”.

“What I would say is, on Sunday we’re going to be able to take some steps, we’ll be closer to the NSW position than we have been for months,” he said on Thursday.

On a concerning note, Melbourne has had 17 mystery infections in the past fortnight. It is well above the target of five outlined in the state government’s plan to reopen.

Mr Andrews will give more details at a briefing later on Friday.

In regional Victoria, Friday’s 14-day average of new infections remained at Thursday’s figure of 0.6. That suggests there are no more cases in the regional town of Shepparton, where thousands of people have been tested for the virus after an outbreak emerged earlier in the week.

The cluster was sparked by a Melbourne truck driver, who has been referred to Victoria Police after initially failing to disclose he had visited Shepparton on September 30.

His visit came to light only this week, after the first of the three infected locals went for testing.

That has left health authorities scrambling to contain the virus spread.

“We have got about 400 people in the Shepparton community that are either cases, contacts or their contacts, so those are three separate groups of people who are all linked through potential chains of transmission,” Mr Andrews said on Thursday.

“They are isolated at home … because of one person.”

Shepparton and surrounding towns are heading into the third day of their testing blitz, with long queues at test sites on Wednesday and Thursday.

There were 1861 tests on Wednesday, with 2000 more expected on Thursday. Testing has been boosted in Shepparton, which is 160 kilometres north of Melbourne, and in surrounding towns.

The driver, who was infected in the Chadstone Shopping Centre outbreak, previously had admitted to visiting Benalla and Kilmore on September 29-30.

He visited the towns on a worker’s permit and illegally dined at a Kilmore cafe, sparking an outbreak there.

He also stayed overnight in Kilmore on September 29.

Deputy chief health officer Allen Cheng said the driver had slipped through the contact tracing net by the time he left for Kilmore.

With this week’s outbreak, everyone in Shepparton has been urged to get tested.

But that demand has overwhelmed test sites and Mr Andrews has apologised, saying more will be set up if necessary.

“There’s absolutely no notice provided here. That’s the challenging part of it,” he said.

Australia’s death toll from the pandemic remains at 904. Victorians make up 816 of those.